Hagley Hall is a Grade I listed 18th-century house in Hagley, Worcestershire,[1] the home of the Lyttelton family. It was the creation of George, 1st Lord Lyttelton (1709–1773), secretary to Frederick, Prince of Wales, poet and man of letters and briefly Chancellor of the Exchequer. Before the death of his father (Sir Thomas Lyttelton) in 1751, he began to landscape the grounds in the new Picturesque style, and between 1754 and 1760 it was he who was responsible for the building of the Neo-Palladian house that survives to this day.

After a fire in 1925, most of the house was restored, but the uppermost floor of the servants' quarters was not, which means that the present roof line between the towers is lower than it was when first constructed.

The estate fell into disrepair and incurred a mounting debt beginning in the 1970s. The 11th Viscount Cobham was forced to sell of large tracts of estate land to keep it afloat (in addition to paying for his high-profile divorce). His brother and successor Christopher Charles Lyttelton, 12th Viscount Cobham began restoration works in both the main house and the park.[2][3] The park is open to the public and part of the house is available as a venue for hire.

As of 2012[update], the hall is the family home to Christopher Charles Lyttelton, 12th Viscount Cobham and his wife Tessa. 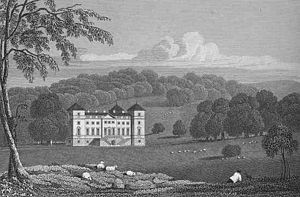 Hagley Hall in the 1820s. The front facade (facing south-west).

Prior to the construction of the current Palladian mansion by the 1st Lord Lyttelton, the earlier house on the site was described as "convenient and built mostly of wood".[4]

The fashion for Neo-Palladian houses had started in London between 1715 and 1720. It spread out to the provinces and did not reach Worcestershire until the 1750s. The two finest examples of this style in Worcestershire were Croome Court built between 1751 and 1752 and Hagley Hall designed by Sanderson Miller (with the assistance of the London architect John Sanderson) between 1754 and 1760. Notable Neo-Palladian features incorporated into Hagley Hall include the plain exterior and the corner towers with pyramidal roofs (a feature first used by Inigo Jones in the design of Wilton House in Wiltshire), and of Venetian windows.[5] The house contains a fine example of Rococo plasterwork by Francesco Vassali and a unique collection of 18th-century Chippendale furniture and family portraits, including works by Van Dyck, Joshua Reynolds, Cornelius Johnson, and Peter Lely. A catalogue of the collection was published in 1900.[6] 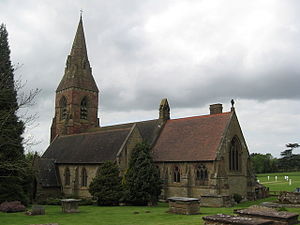 On Christmas Eve 1925, a disastrous fire swept through the house destroying much of the Library and many of the pictures. Despite boiling lead pouring from the roof through the house, all those within managed to escape. At the height of the blaze when nothing more could be salvaged from inside, the 9th Viscount was heard to mutter "my life's work [is] destroyed". He and his wife painstakingly restored the house, except for the staff quarters on the top floor.[citation needed]

To the north of the Hall, and separated from it only by the narrow Hall Drive, is the extensive stable block. The buildings are grouped around two courtyards. The stable block no longer serves its original purpose, but is now operated as a business park for small local businesses.

A short walk to the west of the Hall facing its rear facade, is the parish church of St John the Baptist, and its surrounding churchyard. The old section of the churchyard includes the Lyttelton family plot where many owners of Hagley Hall and their relatives are buried.[citation needed] Immediately to the north-east of the parish church, are the grounds of Hagley Cricket Club, with its separate clubhouse.[citation needed] 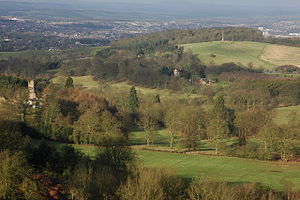 Hagley Park in the foreground, with the Hagley Obelisk on Wychbury Hill in the middle-ground, viewed from the neighbouring Clent Hills 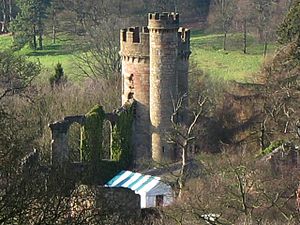 The mock castle in the park was built by Sanderson Miller for George, Lord Lyttleton in the middle of the 18th century to look like a small ruined medieval castle.[7]

The house is set in 350 acres (1.4 km2) of landscaped deer park grazed by fallow deer of several colours. Wychbury Hill, although part of the Estate, is kept open to public. There has been a park at Hagley since the reign of Edward III of England in the 14th century. The present landscape was created from about 1739 to 1764, with follies designed by John Pitt (of Encombe), Thomas Pitt, James "Athenian" Stuart, and Sanderson Miller.[citation needed] Hagley and Croome Court have more follies and other similar features than any estate in the England.[8]

The follies at Hagley include Hagley Obelisk on Wychbury Hill, built in 1764 for Sir Richard Lyttelton. This is visible for many miles.[9] The Temple of Theseus built from 1759 to c. 1762 at a cost of £300 was a gift from Admiral Smith, Lyttelton's half-brother. Other small buildings include some small classical buildings; a sham ruined castle and the "The Four Stones", or Ossian's Tomb as it was termed, on the summit of Clent Hill.[10][11] Horace Walpole, notoriously hard to please, wrote after a visit in 1753, "I wore out my eyes with gazing, my feet with climbing, and my tongue and vocabulary with commending".[12]

In April 1786 John Adams (the future second President of the United States on tour with Thomas Jefferson—who would serve as his vice president before becoming President himself) visited Hagley and other notable houses in the area, after visiting them he wrote in his diary "Stowe, Hagley, and Blenheim, are superb; Woburn, Caversham, and the Leasowes are beautiful. Wotton is both great and elegant, though neglected".[13] In his diary he was damning about the means used to finance the estates, but he was particularly enamoured with Hagley, although he did not think that such embellishments would suit the more rugged American countryside.[13]

50 years before the construction of the Palladian mansion and just after the Gunpowder plot was discovered, two of the miscreants, Robert Wintour and Stephen Littleton, escaped arrest at Holbeche House and travelled south to ask Humphrey Littleton for his assistance. At the time Muriel Littleton, the widow of John Lyttelton who had died in prison, lived at Hagley Park. However Humphrey had the use of the house.

They were captured at Hagley Park on the 9 January 1606 because the authorities had been informed of their presence by Littleton's cook - John Fynwood.[14] He had been alarmed by the quantity of food that was being consumed by Littleton and had seen Robert and Stephen. Despite Littleton's protests that he was not harbouring anyone, a search was made and another servant, David Bate, showed where the two plotters were escaping from a courtyard into the countryside.[14] The two had been on the run for two months and they had Littleton to thank for evading the law for that long. Note the House at Hagley Park was in existence at least 150 years prior to the construction of Hagley Hall.

A 19th-century account of the house and park and the Lyttelton Family ghost story is available.[15]

In 1780, after the death of Thomas Lyttelton, 2nd Baron Lyttelton Hagley Hall was leased to Bernard Dewes, later of Wellesbourne, Warwickshire until 1793.

The Great Western Railway built a series of 4-6-0 steam locomotives named after various halls. Locomotive 4930 was named Hagley Hall and is preserved on the nearby Severn Valley Railway.[16]