St Katharine Cree is a Church of England church in the Aldgate ward of the City of London, on the north side of Leadenhall Street near Leadenhall Market. It was founded in 1280. The present building dates from 1628–30. Formerly a parish church, it is now a guild church.

The parish served by the church existed by 1108, when it was served by the Augustinian Holy Trinity Priory, Aldgate, also called Christ Church, which was founded by Maud, queen at the time of King Henry I. The parishioners used the priory church but this proved unsatisfactory and disruptive to the priory's activities.

The prior partly resolved the problem in 1280[1] by founding St Katharine Cree as a separate church for the parishioners. The site of the present church was originally in the priory's churchyard and it is possible that the church began as a cemetery chapel. It took its name from the priory, "Cree" being a corrupted abbreviation of "Christ Church". It was initially served by a canon appointed by the prior but this did not prove satisfactory either, so in 1414 the church was established as a parish church in its own right. The present tower was added about 1504.

Describing the building at the end of the 16th century, John Stow wrote

"this church seemeth to be very old; since the building whereof the high street hath been so often raised by pavements that now men are fain to descend into the said church by divers steps, seven in number."[2] 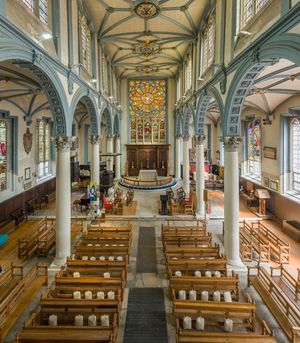 Inside the nave of St Katharine Cree, looking east to the altar

The present church was built in 1628–30,[2] retaining the Tudor tower of its predecessor. It is larger than the previous church, incorporating a piece of ground previously occupied by a cloister on the north side, and the floor level is considerably higher. The rebuilt church was consecrated by William Laud, Bishop of London on 31 January 1631.[2] His vestments and the form of service that he used for the consecration were later held against him in his trial and conviction for heresy, when Puritans accused him of having displayed Catholic sympathies through his "bowings and cringings." He is commemorated by a chapel in the church.

The church escaped the Great Fire of London in 1666[3] and suffered only minor damage in the London Blitz of the Second World War.[4] However, structural problems required extensive restoration in 1962. It is now one of the City's Guild churches.

St Katharine Cree is a significant church of the Jacobean period, a time when few new churches were built. It is the only Jacobean church to have survived in London. The identity of its architect is unknown. It has a high nave,[5] linked with the narrow aisles by arcades supported on Corinthian columns.[2] The church is 31 yards (28 m) long and 17 yards (16 m) wide; the height to the ceiling of the nave is 37 feet (11 m).[2] 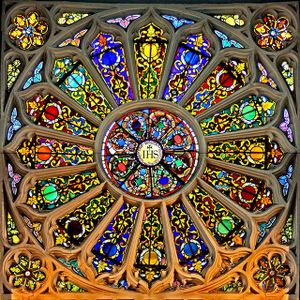 The chancel has a rose window, reputedly modelled on the much larger one in Old St Paul's Cathedral (destroyed in the Great Fire). The window and its stained glass are original, dating from 1630. The baptismal font dates from around 1640. The vaulted ceiling bears bosses of the arms of the City's livery companies; this dates mostly from the restoration of 1962. The church is a Grade I listed building.[6]

By the south wall of St Katharine's is a memorial to RMS Lancastria, a cruiser lost at sea during the Second World War in 1940. It includes a model of the ship and the ship's bell.[7]

St Katharine's has a ring of six bells. Lester and Pack of the Whitechapel Bell Foundry cast five of them including the treble bell in 1754. Thomas II Mears of the Whitechapel Bell Foundry cast the tenor bell in 1842. The church clock has a bell, also cast by Lester and Pack in 1754.[8] In the summer of 2007 they were rung for the first time since 1880. An appeal to raise £60,000 to restore the bells to full ringing order was launched in November 2007, and he project was completed in 2009.[9] It is the only tower in the City where the bells are rung from a ground floor ringing chamber.

Today St Katharine's is a guild church and has no parish, but chose some years ago to dedicate its ministry to the worlds of finance, commerce and industry. The guild vicar is also Rector of St Olave Hart Street. 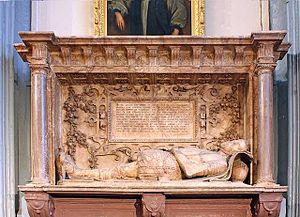