St Marylebone Parish Church is an Anglican church on the Marylebone Road in London. It was built to the designs of Thomas Hardwick in 1813–17. The present site is the third used by the parish for its church. The first was further south, near Oxford Street. The church there was demolished in 1400 and a new one erected further north. This was completely rebuilt in 1740–42, and converted into a chapel-of-ease when Hardwick's church was constructed. The Marylebone area takes its name from the church. Located behind the church is St Marylebone School, a Church of England school for girls.

The first church for the parish was built in the vicinity of the present Marble Arch c.1200, and dedicated to St John the Evangelist. 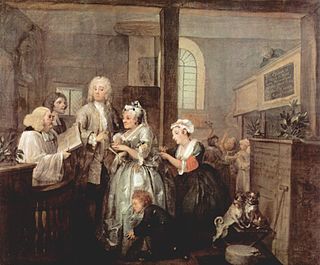 The marriage scene from "The Rake's Progress", showing the interior of the second St Marylebone

In 1400 the Bishop of London gave the parishioners permission to demolish the church of St John and build a new one in a more convenient position, near a recently completed chapel, which could be used until the new church was completed. The bishop stipulated that the old churchyard should be preserved, but also gave permission to enclose a new burial ground at the new site,[1] The church was dedicated to the Virgin Mary.[2] It was closer to the village, at the north end of Marylebone High Street.[citation needed] Having fallen into a state of decay, it was demolished in 1740.[3]

It was in this church Francis Bacon was married in 1606, and its interior was portrayed by William Hogarth in the marriage scene from his famous series "A Rake's Progress" (1735). By 1722, its congregation was so large it needed a chapel of ease in the form of the Marybone Chapel.

A new, small church built on the same site opened in April 1742. It was an oblong brick building with a small bell tower at the west end. The interior had galleries on three sides. Some monuments from the previous church were preserved in the new building.In 1818 it became a chapel-of-ease to the new parish church which superseded it .[4] It was demolished in 1949, and its site, at the northern end of Marylebone High Street is now a public garden.[5]

Charles Wesley lived and worked in the area and sent for the church's rector John Harley and told him "Sir, whatever the world may say of me, I have lived, and I die, a member of the Church of England. I pray you to bury me in your churchyard."[citation needed] On his death, his body was carried to the church by eight clergymen of the Church of England and a memorial stone to him stands in the gardens in High Street, close to his burial spot. One of his sons, Samuel, was later organist of the present church.

It was also in this building that Lord Byron was baptised in 1788, Nelson's daughter Horatia was baptised (Nelson was a worshipper here), and Richard Brinsley Sheridan was married to Elizabeth Ann Linley. This is also the church in which the diplomat Sir William Hamilton married Emma Hart (Amy Lyon), later the lover of Admiral Horatio Nelson.[citation needed] The architect James Gibbs was buried there in 1751.[6] The crypt was the burial place of members of the Bentinck family, including William Cavendish-Bentinck, 3rd Duke of Portland (died 1809).[7]

Construction of a new church was first considered in 1770, with plans prepared by Sir William Chambers and leadership given by the 3rd and 4th Dukes of Portland (owners of much of the area, by now a wealthy residential area to the west of London that had outgrown the previous church), but the scheme was abandoned and the land donated for it in Paddington Street purchased for a burial ground.

In 1810–11[citation needed] a site was secured to build a chapel-of-ease on the south side of the new road near Nottingham Place.[8] facing Regent's Park.[9] Plans were drawn up by Chambers's pupil Thomas Hardwick [10] and the foundation stone was laid on 5 July 1813. When construction was almost complete, it was decided that this new building should serve as the parish church, and so alterations were made to the design. On the north front, towards the new road, a Corinthian portico with eight columns (six columns wide, and two deep at the sides), based on that of the Pantheon in Rome, replaced the intended four-column Ionic portico surmounted by a group of figures. A steeple was built, instead of a planned cupola.[11] No changes were made to the design of the interior, but plans to build houses on part of the site were abandoned.[12]

Entrance to the church from the north is through three doorways beneath the portico, each leading into a vestibule.[13] There are arched windows above the outer doorways. A blank panel above the central one was intended to house a bas-relief depicting Christ's entry into Jerusalem. Hardwick's church was basically rectangular in plan, with two small extensions behind the entrance front, and two wings placed diagonally flanking the far end (the liturgical east),[14] which originally housed private galleries equipped with chairs, tables and fireplaces.[15][16] Two tiers of galleries, supported on iron columns ran around three sides of the church.[17] The organ case was immediately above the altar screen; in the centre of the organ case was an arched opening with a "transparent painting" by Benjamin West, of the angel appearing to the shepherds. Other church furniture included a large pulpit and reading desk and high box pews.

The steeple, placed over the central vestibule, rises around 75 feet (23 m) above the roof (and thus about 120 feet (37 m) above the ground).[18] It is in three storeys;the first, square in plan, contains a clock, the second circular in plan, has twelve Corinthian columns supporting an entablature, while the third is in the form of a miniature temple raised on three steps and surrounded by eight caryatids, with arched openings between them. The whole structure is topped by a dome and weathervane.[19]

The vaulted crypt, extending under the whole church, with extensive catacombs under the west side was used for burials until being bricked up in 1853. Since 1987, following the reinterment of the 850 coffins it previously contained at Brookwood Cemetery in Surrey, it has housed a healing and counselling centre.

A local resident was Charles Dickens (1812–1870), in Devonshire Terrace, whose son was baptised in this church (a ceremony fictionalised in "Dombey and Son"). Robert Browning and Elizabeth Barrett were married in this phase of the church in 1846 (their marriage certificate is preserved in the church archives). The church was also used in location filming for the 1957 film recounting their story, The Barretts of Wimpole Street.[20]

Composer Sir John Stainer wrote an oratorio specifically for the choir at St Marylebone; the The Crucifixion was first performed in the church on 24 February 1887, which was the day after Ash Wednesday. It has been performed annually at the church ever since, usually on Good Friday.[21]

In 1826, the transparency above the altar was removed, the organ case reduced in size and the private galleries replaced by new ones for pupils of the National School.[22]

In 1882 the energetic new rector, the Revd. W. Barker led the parish council to extensively redevelop the church, to (in Barker's words) "bring it more into harmony with the arrangements and decorations suited to the religious demands of the present day". The new plans, by Thomas Harris (architect and churchwarden of the parish), removed the end wall and the upper galleries along the sides of the church (uncovering the windows' full length and letting in more light), created a chancel for a robed choir (with new carved mahogany choir stalls with angel ends) and a sanctuary within the new apse, and added a marble mosaic floor, a fine marble pulpit and two balustrades (with Alpha and Omega on the latter). This new scheme combined Neo-Classicism with Pre-Raphaelitism, and included a gilded cross in the ceiling above the site of the original altar. Funded by subscription, it began in 1884 (with a memorial stone, laid by Mrs Gladstone, wife of the Prime Minister, in the outside wall of the apse) and was completed a year later.

A bomb fell in the churchyard close by during the Second World War, blowing out all the windows, piercing the ceiling over the reredos in two places with pieces of iron railing from the school playground and necessitating the church's closure for repairs until 1949, when fragments of the original coloured glass were incorporated into the new windows and a Browning Chapel created at the back of the church to commemorate the Brownings marriage. This chapel later became a parish room known as the Browning Room, with the chapel transferred to the side of the church as the Holy Family Chapel. This room contained several items of Browning furniture which have since largely been stolen.

The church contains a four manual organ by Rieger Orgelbau. A specification of the organ can be found on the National Pipe Organ Register.[23] 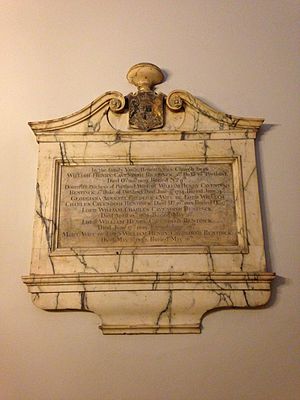