St Peter's Church is a Church of England parish church located in the heart of Bournemouth, Dorset, England. It is a Grade I listed building and was completed in 1879 to a design by G.E. Street as the founding mother church of Bournemouth. The building incorporates work by some of the finest Gothic Revival architects and artists, including Street, George Frederick Bodley, Ninian Comper, Arthur Blomfield and Edward Burne-Jones, with stained glass and frescoes by Clayton and Bell. The chancel has been described as 'one of the richest Gothic Revival interiors in England'.[1]

The 202-foot (62 m)-high spire is a landmark in the town centre, where it forms part of the Town Centre Parish, together with the churches of St. Stephen and St. Augustine.

St. Peter's was built over a period of twenty-four years from 1855 at the instigation of the vicar, the Reverend Alexander Morden Bennett, to replace an earlier building. G.E. Street was commissioned to create a finer church to match the beauty of the town. It was constructed between 1854 and 1879 on the foundations of the 1840s predecessor. (G.E. Street later designed the Royal Courts of Justice in The Strand in London.)

The church, which sits opposite Beales department store in the heart of the town centre, was the founding mother church of Bournemouth. The 202-foot (62 m) spire is a landmark across the town centre and beyond.[2] It has unusual paintings, notable stained glass and alabaster. 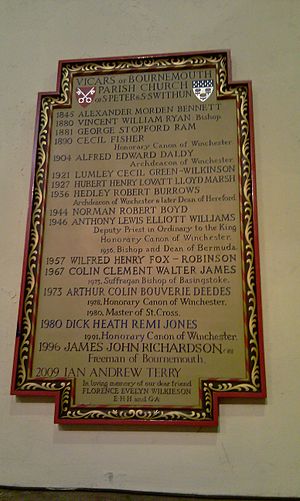 The team rector is the Reverend Dr. Ian Terry, who joined the parish in September 2009. Ian and his family had been previously based in Hereford for seven years, where he was Diocesan Director of Education and Honorary Team Vicar in the West Hereford Team.[3]

The previous rector, the Reverend Canon Jim Richardson, was awarded the OBE in 2006 for services to the Church of England.[4]

St. Peter's has had a strong musical tradition since its foundation.

St. Peter’s Church proudly maintains a choral tradition as an important part of its ministry. The choir leads the music at two choral services each Sunday, with boys and girls joining to sing each week. Adult altos, tenors and basses sing with the trebles at each service.[6] The St. Peter's Singers, a mixed adult voluntary choir who rehearse once a month, sing at occasional services and festivals.

The first organ in St. Peter's was built for the opening of Tulloch's old 'Mock-Gothic' building of 1845. It was built by a Mr. J. Duncan of Poole, who was also the first organist. As Street's work began to replace the old building from 1855, this instrument was moved about, first from its west gallery to the new north aisle in 1856, then into the north-east transept soon after 1864 when the east end was completed. In this last position, with the majority of the new church complete, the organ was found to be 'nearly worn out' and of 'insufficient power'.[7] As a temporary measure, a second-hand instrument was bought from Vauxhall Pleasure Gardens in London, probably in 1865. This had been built by Bates of London in 1840, and originally consisted of seven stops on a single manual.[8] There is no record of its specification after being rebuilt in Bournemouth, but the organ was sold to St. John's, Carlton Hill in Brighton in 1870, and the pipework was later re-used in a 1997 instrument in St. Laurence, Falmer in East Sussex – this specification is not much larger. It is reasonable to speculate that the move to Bournemouth may have only added the Bourdon pedal pipes.[9] Nonetheless, contemporary sources described the Bates organ as 'ugly-looking' and as occupying the whole north transept. Funds were sought to provide a case and pipe decoration, but Alexander Morden Bennett desired an instrument more worthy of the church and attention quickly turned to the idea of a new organ.[10]

In 1869 Alexander Morden Bennett placed an order with Henry Willis for a new organ costing £700. Street's new building was largely completed, lacking only west transepts and tower, and the temporary Bates instrument was ineffectual in the new building. Morden Bennett's choice may also have been influenced by the largely-new organ by Willis in nearby Christchurch Priory which was of a similar size to the new St. Peter's instrument and completed in 1865.[11] The entirely new organ, of 24 stops over three manuals and pedals and with 1292 pipes, was dedicated on St. Luke's Day in 1870. The organ occupied a chamber on the east side of the north transept, next to the sanctuary, and the front pipes were decorated with coloured diaper work in 1873 in keeping with its location.[12] The specification of the organ is here:.[13] Willis cleaned the instrument in 1892, but by 1912 it was described as 'nearly worn out and hardly worth repairing'.[14]

The Harrison Organ (1914 to present day)

In 1913, the church launched an appeal for a new and much larger organ, together with new purpose-built vestries on the north-east corner of the church. A contract was signed with Harrison and Harrison of Durham to build an instrument of 48 stops over three manuals and pedals, eventually costing over £2700. The organ was built in a new chamber created in the space formerly occupied by the vestries on the east side of the north-east transept, and the area next to it formerly occupied by the Willis organ was made into a chapel. Much of the Willis pipework was incorporated into the new specification, which can be seen here:.[15] Arthur Harrison is said to have taken 'infinite pains with it, and had special difficulties to contend with owing to the distance of the instrument from the main body of the church'. A case for the new instrument was designed by Ninian Comper, but the estimated cost of £750 was never found and the instrument remains caseless except for plain dark pine panelling up to the pipe feet. The organ was overhauled by the Liverpool firm of Rushworth and Dreaper in 1976, increasing the size to 54 stops and adding a detached console on a moveable platform at the front of the nave. Cleaning and various repairs and modifications have taken place over the years, but the instrument is again in need of an overhaul as it approaches its centenary.

St. Peter's has the oldest and heaviest ring of bells in Bournemouth.[17] There are eight bells hung for full circle ringing in the English style of change ringing and a Sanctus bell which is chimed by a switch in the chancel.

When the tower was completed in 1870, it was intended to be equipped with a peal of bells, and a bell-chamber, ringing chamber, and circular stairway were provided. When Morden Bennett, the founding priest, succumbed to a serious illness, members of the church and town organised an appeal to raise funds for an additional six bells, augmenting the existing two, to honour him. The bells were manufactured by Taylor's of Loughborough and were dedicated at Whitsun in 1871, on Morden Bennett's recovery. At the dedication, the Ancient Society of College Youths rang a peal consisting of 518 grandsire triples, 672 and 216 Stedman's triples, and 576 treble bob majors.[18]

In 1936, the church proposed re-hanging and re-tuning the existing ring and adding a Sanctus bell as "a distinct and beautiful memorial" to Alfred Daldy, a previous incumbent who had died the previous year. It was found that the bells were in a poor state, and Taylor's suggested re-casting the bells because many improvements had been made in bell-casting since 1871, a transitional period in this skill. At the time, this was still the only peal of bells in Bournemouth, and after recasting by Taylor's, they were dedicated on 20 November 1937.[19] 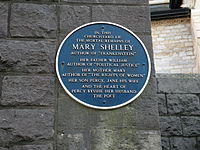 The Shelley Family has a long connection with St. Peter's Bournemouth. Mary Wollstonecraft, a feminist author, and William Godwin, a radical thinker, are buried here alongside their daughter, Mary Shelley, author of Frankenstein.

Mary Shelley's husband, Percy Bysshe Shelley died in the Gulf of Spezia in 1822. When his body was recovered, his friend took his heart. It now sits in the Shelley family vault. Mary Shelley's son, Sir Percy Florence Shelley bought land in Boscombe to build a house, believing that the balmy climate would help his sick wife and his mother. However, Mary Shelley never lived in Boscombe Manor. Sir Percy died in 1889 and his wife, Lady Jane Shelley died 10 years later. The family now rests in the family vault at St Peter's Church.