St Peter's College is one of the constituent colleges of the University of Oxford and is located in New Inn Hall Street, Oxford, United Kingdom. It occupies the site of two of the university's oldest inns, both of which were founded in the 13th century. In 1979, it began admitting women. The modern college was founded as St Peter's Hall in 1929 by Francis James Chavasse, Bishop of Liverpool, and achieved full collegiate status in 1961, becoming St Peter's College.

St Peter's occupies the site of two of the university's oldest inns, or medieval hostels - Bishop Trilleck's, later New Inn Hall, and Rose Hall - both of which were founded in the 13th century and were part of the university in their own right. During the First English Civil War, the university's college plate was requisitioned by the King's Oxford Parliament and taken to New Inn Hall to be melted down into "Oxford Crowns".[3] In the 18th century, William Blackstone became the Principal of New Inn Hall after being appointed the Vinerian Professor of English Law at Oxford. New Inn Hall and Rose Hall later became part of Balliol College.

The modern history of the college in its present form began in 1928 when St Peter's Hall opened as a hostel with 13 residents.[4] In 1929 it received a licence as a hall with 40 members. The founder of the institution was Francis James Chavasse, Bishop of Liverpool, who was concerned at the rising cost of education in the older universities in Britain, and projected St Peter's as a college where promising students, who might otherwise be deterred by the costs of college life elsewhere, could obtain an Oxford education.

In 1961, the university approved a statute giving St Peter's Hall full collegiate status. With the granting of its royal charter in the same year, it took the name St Peter's College.

The colours of the college are green and gold.

Taking the original name of the college, GWR 6959 Class steam locomotive no. 7900 was built in 1949 for British Railways and named "Saint Peter's Hall" (no abbreviation). One of the brass nameplates from the now-scrapped locomotive survives in the college. 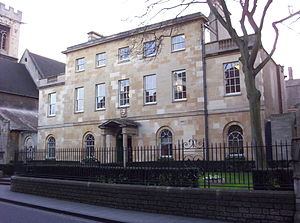 St Peter's has an interesting and varied set of buildings, many of them much older than the college itself. The college has, in effect, adapted existing buildings to provide the collective facilities needed for college life, and built new ones to provide for student accommodation. Linton House, a Georgian rectory, dating from 1797, is the entrance to the college and houses the porters' lodge and college library. Canal House, the master's lodge, dates from the early 19th century.

The college dining hall, known as Hannington Hall after the Victorian missionary Bishop James Hannington, dates from 1832 and is the only surviving part of New Inn Hall. The buildings of the former Oxford Girls' School, which adjoin the original site of the college, have been acquired more recently and provide living accommodation for students, seminar rooms, a Middle Common Room (for postgraduates) and a music room.

The college chapel was originally the Church of St Peter-le-Bailey, built in 1874, and the third church of that name on this site. The chapel is filled with memorials to members of the Chavasse family, including Captain Noel Chavasse's original grave cross, the Chavasse memorial window and a large bas-relief of Bishop Francis Chavasse at prayer.[5] 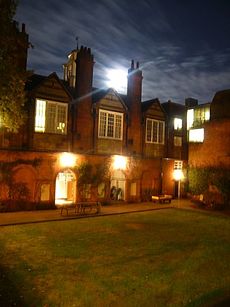 The Chavasse Building at night

The college has four quads: Linton Quad (the main quad), Mulberry Quad, Hannington Quad and Chavasse Quad. On-site, students are housed in the modern New Block, in the spacious Chavasse building, in Staircase IV and in the Matthews block (this latter building also housing a spacious JCR and student run bar). The senior executive of the MCR are generally provided with housing in the Morris Building. Fellows and college staff occupy rooms mostly in Staircases I-III, the Latner building and Staircase IV.

St Peter's also has a few off-site accommodation blocks for students, all just a few minutes away from the main college site. St Thomas' Street and St George's Gate house undergraduates, while Paradise Street (which was only officially opened in June 2008) houses postgraduates and fourth-year undergraduates. 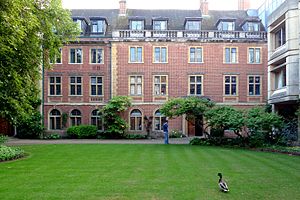 The student-run Junior Common Room organises a wide variety of social events throughout the academic year, ranging from formal events to celebrate such things as Burns Night (complete with haggis and poetry) to creatively themed parties that run into the early hours of the morning. The college is one of the few to feature its own student-edited arts magazine, Misc, which is published termly.

The college has sports teams competing in rowing, cricket, football, table football and rugby. It shares a sports field with Exeter and Hertford which has two cricket pitches and pavilions, two rugby and football pitches, a hockey pitch, tennis courts and a squash court.[6]