Stafford County is a county located in the Commonwealth of Virginia. As of the 2010 census, the population was 128,961.[1] Its county seat is Stafford.[2]

Located across the Rappahannock River from the City of Fredericksburg, Stafford County is part of the Washington-Arlington-Alexandria, DC-VA-MD-WV Metropolitan Statistical Area. In 2006, and again in 2009, Stafford was ranked as the 11th highest income county in America by Forbes magazine.

For thousands of years, various cultures of indigenous peoples succeeded each other in their territories along the Potomac River and its tributaries. By the time of English colonization, there were 32 Algonquian-speaking American Indian tribes in the present-day coastal Tidewater Virginia area, including those of the Patawomeck and numerous tribes that were part of the Powhatan Confederacy. The former small tribe, still centered in Stafford County, was recognized by the state of Virginia in 2010.

The Native Americans' first recorded encounter with Europeans in this area was in 1608, with John Smith of the Jamestown Settlement. During a time of recurring tension between the early English colonists and local Native Americans, the colonists led by Samuel Argall captured Chief Powhatan's daughter, Pocahontas while she was residing with her husband, Kocoum. It occurred in the eastern part of this county, from where they took her to a secondary English settlement, known as Henricus (or Henrico Town). Alexander Whitaker converted Pocahontas to Christianity during her captivity. He renamed the princess "Rebecca" at her baptism. Rebecca married English colonist John Rolfe on April 5, 1614 in Jamestown.[3][4]

The English colonial government of Virginia imposed its own order on the land and peoples. In 1664 it established Stafford County from territory previously part of Westmoreland County.[5] It was named after Staffordshire, England. As originally delineated, Stafford County included a much larger area than its current borders, and in fact encompassed what would later become Arlington, Fairfax, and Prince William, and the City of Alexandria.[5] It is part of the area now considered Northern Virginia. George Washington spent much of his childhood in the lower part of the county on his family's home, Ferry Farm, along the Rappahannock River across from Fredericksburg. Colonial Forge High School was built on a tract of land owned in colonial times by his father Augustine Washington.[6] George Mason, another Founding Father of the nation, also spent his formative years in Stafford.[7]

Aquia Church, built in 1757, is unusual among local structures for having been designed on the plan of a Greek cross rather than the more standard Roman Cross design. In addition, Aquia Church has a rare three-tiered pulpit; it has been designated a National Historic Landmark. The Episcopal church continues to be active today.[8]

Stafford County industry and resources were important to the colony and early nation. During the Revolutionary War, the Stafford ironworks furnished arms for the colonial rebel soldiers.[9] Aquia Creek sandstone, quarried from Government Island, was used to build the White House and the U.S. Capitol.[10]

During the American Civil War, the county was part of the battlegrounds, occupied by more than 100,000 troops for several years. The Battle of Aquia Creek took place in the Aquia Harbour area.[11] Both the Union Army and Confederate Army struggled to control the strategic Potomac Creek Bridge at various times during the war.

Stafford County today is considered part of the Washington, D.C. metropolitan area. Many residents commute to work in Washington and its environs north on Interstate Highway 95, U.S. Route 1, and Virginia Railway Express.

In the early morning hours of May 9, 2008, a tornado touched down in the southern part of the county, severely damaging about 140 suburban homes.[12][13]

The county was also severely affected by "Snowmageddon," the massive blizzards of December 2009 and February 2010. Stafford received some of the heaviest snow in the D.C. metropolitan area, with about 25 inches of snow in December, and 19 inches in February.[14][15]

The county is divided into seven magisterial districts: George Washington, Hartwood, Falmouth, Griffis-Widewater, Aquia, Garrisonville, and Rockhill. The magisterial districts each elect one supervisor to the Board of Supervisors which governs Stafford County. The County operates under the county form of the County Executive system of government, with an elected Board of Supervisors. The Board then appoints a professional, nonpartisan County Administrator to manage government agencies. 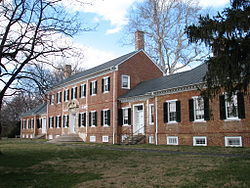 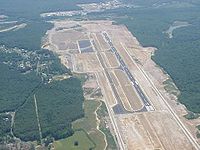