Sir Richard Stafford Cripps CH PC FRS[1] (24 April 1889 – 21 April 1952) was a British Labour politician of the first half of the 20th century. During World War II he served in a number of positions in the wartime coalition, including Ambassador to the Soviet Union and Minister of Aircraft Production. After the war he served in the Attlee Ministry, firstly as President of the Board of Trade and between 1947 and 1950 as Chancellor of the Exchequer. In the latter position, Cripps was responsible for laying the foundations of Britain’s post-war economic prosperity, and was, according to historian Kenneth O. Morgan, “the real architect of the rapidly improving economic picture and growing affluence from 1952 onwards.”[2] The economy improved after 1947, benefiting from the American money given through the Marshall Plan, but was hurt by the forced devaluation of the pound in 1949. He kept rationing in place to hold down consumption during an "age of austerity," promoted exports, and maintained full employment with static wages. A leading spokesman for the left and cooperation in a Popular Front with Communists before 1939, he grew wary of the Soviet Union after his term as ambassador, 1940–42. He failed in his efforts to resolve the wartime crisis in India, where the proposals he drafted himself were too radical for Churchill and the cabinet, and too conservative for Gandhi and his people. The public especially respected "his integrity, competence, and Christian principles."[3]

Born in London, Cripps grew up in a wealthy family and was educated at Winchester College where the Headmaster described him as "a thoroughly good fellow"[4] and at University College London, where he studied chemistry. He left science for the law, and in 1912 was called to the bar as a barrister. He served in the First World War as a Red Cross ambulance driver in France, and then managed a chemical factory producing armaments. He remained a barrister during the 1920s, where he specialised in patent cases, and was reported to be the highest paid lawyer in England.[5]

He was intensely religious all his life, but belonged to no church. In the 1920s he became a leader in the World Alliance to Promote International Friendship through the Churches, as his father had been. In 1923 to 1929 Cripps was the group's treasurer and its most energetic lecturer.[6]

At the end of the 1920s Cripps moved to the left in his political views, and in 1930 he joined the Labour Party. The next year, Cripps was appointed Solicitor-General in the second Labour government. This post was customarily accompanied by a knighthood, making him Sir Stafford Cripps. In 1931, Cripps was elected in a by-election for Bristol East. During this time in parliament, he was a strong proponent of Marxist social and economic policies, although his strong faith in evangelical Christianity prevented him from subscribing to the Marxist rejection of religion.

In the 1931 general election, Cripps was one of only three former Labour ministers to hold their seats alongside the party leader George Lansbury and deputy leader Clement Attlee.

In 1932 he helped found and became the leader of the Socialist League, which was composed largely of intellectuals and teachers from the Independent Labour Party who rejected its decision to disaffiliate from Labour. The Socialist League put the case for an austere form of democratic socialism. He argued that on taking power the Labour Party should immediately enact an Emergency Powers Act, allowing it to rule by decree and thus "forestall any sabotage by financial interests,” and also immediately abolish the House of Lords.[6]

In 1936, Labour's National Executive Committee dissociated itself from a speech in which Cripps said he did not "believe it would be a bad thing for the British working class if Germany defeated us".[7] Cripps also opposed British rearmament:

"Money cannot make armaments. Armaments can only be made by the skill of the British working class, and it is the British working class who would be called upon to use them. To-day you have the most glorious opportunity that the workers have ever had if you will only use the necessity of capitalism in order to get power yourselves. The capitalists are in your hands. Refuse to make munitions, refuse to make armaments, and they are helpless. They would have to hand the control of the country over to you".[8]

Cripps was an early advocate of a United Front against the rising threat of fascism and he opposed an appeasement policy towards Nazi Germany. In 1936 he was the moving force behind a Unity Campaign, involving the Socialist League, the Independent Labour Party and the Communist Party of Great Britain, designed to forge electoral unity against the right. Opposed by the Labour leadership, the Unity Campaign failed in its intentions. Rather than face expulsion from Labour, Cripps dissolved the Socialist League in 1937. Tribune, set up as the campaign's newspaper by Cripps and George Strauss, survived. In early 1939, however, Cripps was expelled from the Labour Party for his advocacy of a Popular Front with the Communist Party, the Independent Labour Party, the Liberal Party and anti-appeasement Conservatives. 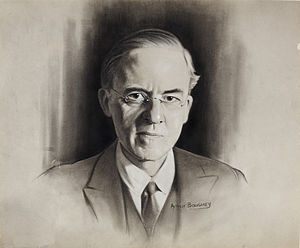 When Winston Churchill formed his wartime coalition government in 1940 he appointed Cripps Ambassador to the Soviet Union in the view that Cripps, who had Marxist sympathies, could negotiate with Joseph Stalin who was at this time allied with Nazi Germany through the Molotov-Ribbentrop Pact. When Hitler attacked the Soviet Union in June 1941, Cripps became a key figure in forging an alliance between the western powers and the Soviet Union.

In 1942 Cripps returned to Britain and made a broadcast about the Soviet war effort. The popular response was phenomenal, and Cripps rapidly became one of the most popular politicians in the country, despite having no party backing. He was appointed a member of the War Cabinet, with the jobs of Lord Privy Seal and Leader of the House of Commons, and was considered for a short period after his return from Moscow as a rival to Churchill in his hold on the country.[9]

Churchill responded by sending Cripps to India on a mission ("the Cripps Mission") to negotiate an agreement with the nationalist leaders Gandhi, claiming to speak on behalf of all Indians and Jinnah claiming to speak on behalf of the Muslims, that would keep India loyal to the British war effort in exchange for a promise of full self-government after the war. Cripps designed the proposals himself, but they were too radical for Churchill and the Viceroy, and too conservative for the Indians, and no middle way was found.[10][11]

Later in 1942 Cripps stepped down from being Leader of the House of Commons and was appointed Minister of Aircraft Production, a position outside the War Cabinet in which he served with substantial success. In 1945 he rejoined the Labour Party.

Cripps was unhappy with the British black propaganda campaign against Germany. When Cripps discovered what Sefton Delmer was involved with (through the intervention of Richard Crossman) he wrote to Anthony Eden, then Foreign Secretary: "If this is the sort of thing that is needed to win the war, why, I'd rather lose it." Delmer was defended by Robert Bruce Lockhart who pointed out the need to reach the sadist in the German nature.[12]

When Labour won the 1945 general election, Clement Attlee appointed Cripps President of the Board of Trade, the second most important economic post in the government. Although still a strong socialist, Cripps had modified his views sufficiently to be able to work with mainstream Labour ministers. In Britain's desperate post-war economic circumstances, Cripps became associated with the policy of "austerity." As an upper-class socialist he held a puritanical view of society, enforcing rationing with equal severity against all classes. Together with other individuals he was instrumental in the foundation of the original College of Aeronautics, now Cranfield University, in 1946. The Vice-Chancellor's building is known as "Stafford-Cripps".

In 1946 Soviet jet engine designers approached Stalin with a request to buy jet designs from Western sources to overcome design difficulties. Stalin is said to have replied: "What fool will sell us his secrets?" However, he gave his assent to the proposal, and Soviet scientists and designers travelled to the United Kingdom to meet Cripps and request the engines. To Stalin's amazement, Cripps and the Labour government were perfectly willing to provide technical information on the Rolls-Royce Nene centrifugal-flow jet engine designed by RAF officer Frank Whittle, along with discussions of a licence to manufacture Nene engines. The Nene engine was promptly reverse-engineered and produced in modified form as the Soviet Klimov VK-1 jet engine, later incorporated into the MiG-15 which flew in time to deploy in combat against UN forces in North Korea in 1950, causing the loss of several B-29 bombers and cancellation of their daylight bombing missions over North Korea.[13]

Also in 1946, Cripps returned to India as part of the "Cabinet Mission", which proposed various formulae for independence to the Indian leaders. The other two members of the delegation were Lord Pethick-Lawrence, the Secretary of State for India, and A. V. Alexander, the First Lord of the Admiralty. However, the solution devised by the three men, known as the Cabinet Mission Plan, was unsatisfactory to the Indian National Congress mainly its principal leaders, and instead of having to hold together the emerging one nation, Indian National Congress leaders travelled further down the road that eventually led to Partition.

In 1947, amid a growing economic and political crisis, Cripps tried to persuade Attlee to retire in favour of Ernest Bevin; however, Bevin was in favour of Attlee remaining. Cripps was instead appointed to the new post of Minister for Economic Affairs. Six weeks later Hugh Dalton resigned as Chancellor of the Exchequer and Cripps succeeded him, with the position of Minister for Economic Affairs now merged into the Chancellorship. He increased taxes and forced a reduction in consumption in an effort to boost exports and stabilise the Pound Sterling so that Britain could trade its way out of its crisis. He strongly supported the nationalisation of strategic industries such as coal and steel.[14]

Despite financial problems from 1948 to 1949, Cripps maintained a high level of social spending on housing, health, and other welfare services, while also maintaining the location of industry policy. In addition, levels of personal prosperity continued to rise, as characterised by cricket and football enjoying unprecedented booms, together with the holiday camps, the dance hall, and the cinema.[15] In his last budget as chancellor (introduced in 1950), the housebuilding programme was restored to 200,000 per annum (after having previously been reduced due to government austerity measures), income tax was reduced for low-income earners as an overtime incentive,[16] and spending on health, national insurance, and education was increased.[17]

His name once induced an infamous Spoonerism when the BBC announcer McDonald Hobley introduced him as 'Sir Stifford Crapps'.[18]

Cripps had suffered for many years from colitis, inflammation of the lower bowel, a condition aggravated by stress. In 1950 his health broke down and he was forced to resign his office in October. He resigned from Parliament the same month, and at the resulting by-election on 30 November he was succeeded as MP for Bristol South East by Tony Benn. Cripps died two years later of cancer.

Cripps was the sororal nephew of Beatrice Webb and Catherine Courtney. His mother died when he was four years old. His stepmother, Marian Ellis, had a profound influence on him. He was married to Isobel, Lady Cripps, better known as Dame Isobel Cripps (1891–1979), and had four children

Cripps was a vegetarian, certainly for health reasons and possibly also for ethical reasons. "Cripps suffered from recurring illness which was alleviated by nature cure and a vegetarian diet...".[23]

Cripps is buried in the churchyard in Sapperton, Gloucestershire, and his wife is buried beside him.[24]