Staffordshire Police is the territorial police force responsible for policing Staffordshire and Stoke-on-Trent in the West Midlands of England. It is made up of nine Local Policing Teams, whose boundaries are matched to the nine local authorities within Staffordshire. 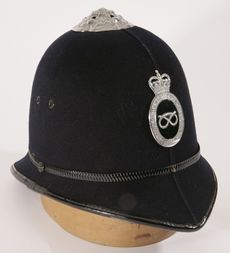 Under proposals made by the Home Secretary on 6 February 2006, it would have merged with Warwickshire Constabulary, West Mercia Constabulary and West Midlands Police to form a single strategic force for the West Midlands region.[3] However these plans have not been taken forward largely due to public opposition.

For 2005/06 Staffordshire police topped the Home Office chart as being the best performing police force in England and Wales.[4]

Staffordshire Police is one of three forces involved in the Central Motorway Police Group along with West Midlands Police and West Mercia Police. This unit provides roads policing for the motorway network in the West Midlands (mainly M5, M6 and M42). Staffordshire Police has no other roads policing capacity; this was disbanded in 1999 during the major force reorganisation that also saw the mounted branch disbanded. The Force shares air support with the adjoining West Mercia Constabulary which forms the Central Counties Air Operations Unit.[5] based at Wolverhampton Airport in South Staffordshire.

In September 2008, the force announced that it intended to vacate the Cannock Road site and sell it for housing development, moving HQ staff to Lanchester Court, next to the existing Weston Road premises.[6][7]

Staffordshire Police Authority, a separate organisation charged with oversight of the force, has 9 councillors (drawn from both Staffordshire County Council and Stoke-on-Trent City Council), 3 justices of the peace, and 5 independent members.

The Police Roll of Honour Trust lists and commemorates all British police officers killed in the line of duty, and since its establishment in 1984 has erected over 38 memorials to some of those officers.

The following officers of Staffordshire Police are listed by the Trust as having died attempting to prevent, stop or solve a crime, since the turn of the 20th century:[8]

The Staffordshire Police Cadet scheme aims to strengthen links between the police and young people and promote good citizenship.{[9]}

In November 2012, the Staffordshire's first Police and Crime Commissioner, Matthew Ellis, was elected. The Office of the Police and Crime Commissioner and the individual elected is responsible for reducing crime and making the area they represent safer. The PCC decides how much council tax people will pay towards community safety services and policing and is personally accountable for all the public money spent.