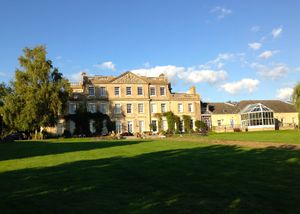 Stagenhoe is a Grade II listed stately home and surrounding gardens located in the village of St Paul's Walden in Hertfordshire. It is approximately 5 miles (8 km) south of Hitchin.

It is one of two large manors with fine grounds in the village, the other being the historic home of the Bowes-Lyon family St Paul's Walden Bury.

Records about the manor of Stagenhoe date back to before the Norman Conquest, when it was one 'hide' (approximately 120 acres).[1]

In 1595 (37th Eliz.), the manor of Stagenhoe was conveyed to William Hale, of King's Walden. His seventh son and eleventh child, John Hale, was knighted in 1660, built Stagenhoe Manor House about that time, was sheriff of the county in 1663, and died in 1672. Dame Elizabeth, was the wife of this John Hale, and died one year after him. They were the last of the Hales of Stagenhoe ; their daughter, Rose, who died 1695, carried the property to Sir John Austen, of Hall Place, Bexley, he died 1689. His son, Sir Robert Austen (died 1706) sold it to the Heyshams.

The current manor was built in the 18th century, after a fire in about 1737. It has many 19th-century and later additions, including extensions to the rear and a porch on the west side. The main feature is the stuccoed south facade. The property was listed in 1968.[3]

Having passed out of private hands, the house is much altered internally. It is now used as a Sue Ryder Care home.[3] The grounds contain a registered campsite with five caravan pitches.[4]