Stalbridge /ˈstɔːlbrɪdʒ/ is a small town and civil parish in Dorset, England, situated in the Blackmore Vale area of North Dorset district, near the border with Somerset. In the 2011 census the civil parish—which includes the small settlement of Stalbridge Weston to the southwest—had 1,160 households and a population of 2,698.[1] The nearest towns are Sturminster Newton, 4 miles (6.4 km) south east, Sherborne, 6 miles (9.7 km) west, and Shaftesbury, 7 miles (11 km) north east. Stalbridge is situated on the A357 road on a low limestone ridge, one mile west of the River Stour. It officially became a town in April 1992.[2]

Though relatively small, Stalbridge has its own independent supermarket, a newsagent, electronics store, GP surgery, dentist and optician, as well as many other services, reflecting its catchment area of surrounding farms and hamlets. It is also home to the local free newspaper, the Blackmore Vale Magazine. 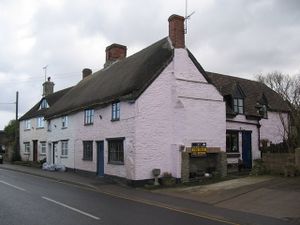 There was a settlement near Stalbridge in Roman times. The town has a 15th-century church with a 19th-century tower, dedicated to Saint Mary and restored to designs by T. H. Wyatt,[3] in 1878, which overlooks the town from a hill. The town has had market rights since the time of King George I, though it has not held a regular market for many years. In the town centre stands a 10 metre (30 ft) tall market cross, said to be the finest in the country.[4]

Stalbridge was home to scientist Robert Boyle (see below), and writer Douglas Adams, who wrote much of "The Hitch Hiker's Guide to the Galaxy" in the town. The town also boasts that it is home to the oldest living male twins in the world.

Artist Sir James Thornhill lived just south of the town, in Thornhill Park, which he bought in 1725. The house is believed to have been originally owned by Sir Walter Raleigh in the 16th century.[citation needed] In 1727, Sir James Thornhill erected an obelisk in the park to honour the accession of King George II.[4]

From September 1863 Stalbridge was served by Stalbridge railway station on the Somerset and Dorset Joint Railway, with trains to Bath and Bournemouth. During World War II a Ministry of Food depot was situated here. The last train ran on 7 March 1966, and most of the tracks, station and goods yard have been replaced, though tracks still cross the road.[5]

In 1618 Mervyn Tucher (or Audley), 2nd Earl of Castlehaven, who had inherited Stalbridge Park from his father, decided to build a mansion house on his Stalbridge estate. He enclosed an area used as common land to the northwest of the church, moving tenant farmers out, and built a Jacobean style mansion, the fifth largest house in Dorset.

In 1631 the earl's eldest son James brought a case against him for "unnatural practices", and he was subsequently executed.

James sold the house to Richard Boyle, 1st Earl of Cork. After his father's death, the scientist Robert Boyle became Lord of the Manor, and the house was his residence between 1644 and 1655. It was here that he conducted many of his experiments.[3]

At some point during the house's history a 2 metre high stone wall was built around the boundary of Stalbridge Park. There is some argument as to when and why the wall was built. It may have been commissioned by Castlehaven as a status symbol, work for French prisoners of the Napoleonic Wars, or as work for local labourers in times of high unemployment.

By 1822 the house was in poor repair and the current owner, the Marquess of Anglesey, had it demolished.[6] By 1827 all that remained was the raised area where it had stood. The stone was sold off and much of it is in use elsewhere in the town, including the large farm house which now stands in the park.

There are many popular local myths and ghost stories about the demise of the house, mostly involving a fire destroying the house.

Stalbridge is the major part of Blackmore electoral ward. The ward also includes Stourton Caundle and south to the Lydlinch area. The ward population at the 2011 census was 3,574.[7]