Stamford Bridge is a village and civil parish on the River Derwent in the East Riding of Yorkshire, England, approximately 7 miles (11 km) east of York and 22 miles (35 km) west of Driffield. The village lies on the border with the Ryedale district of North Yorkshire.

The village sits astride an ancient ford on the River Derwent.

The Romans established a fort here about 70 AD, around which later developed a large linear civilian settlement focused on a bridge one mile (1.6 km) south of the present town. Iter I of the Antonine Itinerary lists "Derventio" as being seven Roman miles from Eboracum (York) which matches the distance from York. In relation to known discoveries under the town of Malton, antiquaries always assumed that Malton should be called Derventio. The remains at Stamford Bridge were not known to them, lying undiscovered under arable and pasture fields until quite recently.

The Battle of Stamford Bridge on 25 September 1066 marked the end of the Viking era in Britain.

The settlement was called Pons Belli by the Normans, meaning battle bridge. Rents of freeholders and cottagers were recorded in 1368 and there was a common oven recorded the same year.

The A166 east-west road crossing the river at Stamford Bridge is one of the main roads from York to the East Riding and the coast. The road bridge in the village was closed on 5 March 2007, for just over 11 weeks, so that essential repairs could be carried out, in light of the enormous volume of traffic that uses it, exceptional for such an old bridge (dating from 1727). The bridge re-opened on 22 May.

The village suffered from record floods in November 2000 which seriously flooded 30 businesses and homes. Flood defences have now been installed, costing £3.7 million.

The River Derwent divides Stamford Bridge into two. It rises in the North Yorkshire Moors and flows south-west rather than taking a direct route to the North Sea. It eventually joins the River Ouse north of the village of Long Drax, before flowing ultimately into the Humber Estuary.

During 4/5 March 1999, exceptional levels of rainfall were experienced in the Derwent catchment area, reaching 125 millimetres (4.9 in) inside a 24‑hour period. The situation was worsened by melting snow which had earlier accumulated on the North York Moors. 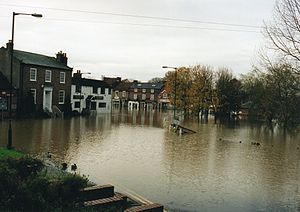 The Village flood in October 2000

The conditions deteriorated and by Sunday 7 March large areas of Stamford Bridge were under water and a final flooding depth of approximately 1.5 metres (4.9 ft) was recorded by Monday 8 March.

At the height of the flooding the River Derwent reach the peak of 5m above its normal level, the highest level ever recorded exceeding the previous highest in 1931 by 0.5 metres (20 in).

However, the following year a new record flood level was set. In October 2000 the Derwent again burst its banks and peaked slightly above the 1999 flood level.

The flood defences were breached, and much of the village square was under water, on the morning of 26 June 2007, in the wake of exceptional rainfall over the previous 24 hours.

Stamford Bridge has several notable landmarks, including the Corn Mill; the stone arched bridge over the River Derwent; the York-Market Weighton railway viaduct,[6] and Stamford Bridge railway station, both c. 1847;[7] a Wesleyan Methodist Chapel, built 1828 in yellow brick;[8][9] the Bay Horse Inn, late 18th to early 19th century public house;[10] as well as "Derwent Plastics factory", on the west side of the river, established in 1934 from a former brewery building; and a memorial commemorating the Battle of Stamford Bridge overlooking the field where the battle is thought to have taken place.

Just east of Stamford Bridge is the manor house Burtonfields Hall, built in 1837 by the architect Anthony Salvin for Charles Darley. Darley was married to Salvin's sister-in-law Marianne Nesfield, and their daughter married Anthony Salvin Junior. The original house was extended by W H Brierley in about 1898.

The current mill was possibly expanded in 1847–50 when nearly £1,000 was spent on it. Subsequently there were two water wheels and seven pairs of grinding stones. The mill ceased operation in 1964 and was converted into a restaurant in 1967. More recently the Cornmill was converted into twelve two-bedroom apartments but some of the original equipment remains.

There has been a river crossing since at least Roman times. The river 270 yards (250 m) upstream of the current bridge was passable except at times of flood via a natural rock ford. There was a bridge at or near the village in the 11th century as one is referred to in accounts of the battle of 1066, noted in the Anglo-Saxon Chronicle, Manuscript 'C'. Archaeological research has shown that there was a bridge crossing of the River Derwent one mile (1.6 km) south of the present village which linked the east and west bank of the Roman settlement of Derventio.

In the medieval period a new bridge made of timber supported on three stone piers was erected. Records show that this was repaired in the 13th and 16th centuries. A map from 1724 shows this bridge to have been 77 yards (70 m) upstream from the current bridge.

In the 18th century the weir and the by-pass canal and lock, known as the New Cut, were built and the medieval bridge was replaced with the current structure.

The present bridge was designed by William Etty under an Act of 1725 and completed in 1727. The bridge was strengthened in the 1960s and at the same time the adjacent pedestrian bridge was erected.[12]

The bridge is a Grade II* listed monument.[13]

Opened on 3 October 1847, the viaduct originally carried the York to Beverley railway line across the Derwent, closed 1965. It consists of red brick arches on either side of a single wider wrought-iron span that crosses the river. The viaduct now forms part of a public cycle route, and is Grade II* listed.[14]

The village school was first built in Main Street in 1795 as a result of a legacy left by Christopher Wharton. Education was provided free for 12 poor boys and 6 poor girls who had to provide one shilling a year for kindling. Pay scholars were also taught and by 1822 the school population numbered 30. 1874 saw compulsory education and in 1911 the East Riding County Council took over and built a school on the present Church Road site.

This original building was modernised and extended in 1968 and because of the rapid development of the village a further extension was added in 1978. In April 1983 a new infants building, in Godwinsway, Stamford Bridge, was added to the school. Built for 120 infant children it makes the school a split site establishment, but adds greatly to the educational provision for the children. In 2000 this building was also extended.

Even though the journey from York to the North Sea coast is just an hour, Stamford Bridge remains a popular stopping point for travellers on the A166. Most stops are for refreshment, usually required due to the long queues to get over the one lane bridge, at one of the establishments located around The Square.

The facilities located in central Stamford Bridge include:

In recent years Stamford Bridge has lost the services of a petrol filling station (once the village had three), ladies clothing shop, HSBC bank, a cafe and hotel which have all closed.

The village has several other facilities available for locals and visitors.

The village is served by two bus routes. The number 10 route is operated by First York (and York Pullman in the evenings) with a regular service via Dunnington to the centre of York and then Poppleton. East Yorkshire Motor Services operate an occasional service (No 747) between York and Stamford Bridge continuing to Full Sutton, Fangfoss and Pocklington. Information as at October 2011.

Stamford Bridge railway station closed in 1965 as part of the Beeching cuts.[15] The Minsters Rail Campaign is campaigning to re-open the railway line between Beverley and York (with stops at Stamford Bridge, Pocklington and Market Weighton). The proposed re-opened railway would skirt the eastern edge of the village as the former alignment has since been developed.[16]