Stamford School is an English independent school situated in the market town of Stamford, Lincolnshire, England. It has been a member of the Headmasters' and Headmistresses' Conference since 1920. With the girls-only Stamford High School and the coeducational Stamford Junior School, it is part of the Stamford Endowed Schools.

The school was founded in 1532 by a local merchant and alderman, William Radcliffe, who had been encouraged when younger by Lady Margaret Beaufort, (d.1509) mother of Henry VII, though there is evidence to suggest that a school existed from the beginning of the fourteenth century. Founded as a chantry school, it fell foul of the Protestant reformers and was only saved from destruction under the Chantries Act of Edward VI by the personal intervention of Sir William Cecil (later Lord Burghley) who worked in the service of Edward Seymour, 1st Duke of Somerset and who secured a specific Act of Parliament in 1548 ensuring its survival. Apart from the chantries of the University of Oxford and the University of Cambridge, only those of Eton College, Winchester College, Berkhamsted, St Albans and Stamford schools survived. 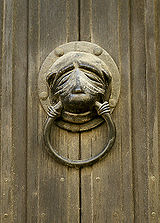 A copy of the original Brazenose Knocker is mounted on a gate
File:Brazenose House from Stamford School - geograph.org.uk - 601606.jpg
Brazenose House

Teaching is believed to have begun in the Corpus Christi chapel of Stamford's twelfth century church of St Mary, but by 1566 was taking place in the remaining portion of the redundant St Paul's Church, originally built no later than 1152. This building continued in use as a school room until the early twentieth century when it was reclaimed and extended and, in 1930, returned to use as a chapel. About thirty years later an interesting nineteenth century Gray and Davison pipe organ was installed although this was removed in the 1990s and replaced with an electronic substitute. Over its history the school has built or absorbed seventeenth, eighteenth and nineteenth century buildings, besides the site of a further demolished medieval church (Holy Trinity/St Stephen's) and remains of the hall of Brasenose College built by the secessionists from the University of Oxford in the fourteenth century. Brasenose College bought the house in 1890 to recover the original medieval Brazenose Knocker.

The right of appointment of the school's master, a position hotly contested in past centuries on account of the post's disproportionately large salary, was shared between the Mayor of Stamford and the Master of St John's College, Cambridge. This arrangement continues to be reflected in the fact that both Stamford Town Council and St John's College have nominees on the school's governing body. Stamford School has a sister school, Stamford High School which was founded in 1877. The funds for the foundation of the High School and the further endowment of the existing boys' school were appropriated from the endowment of Browne's Hospital by Act of Parliament in 1871. This trust had originally been established for the relief of poverty by William Browne (died 1489), another wealthy wool merchant and alderman of the town, and his gift is commemorated in the name of a school house.

In recent years, the two schools have been united under the leadership of a single principal as the Stamford Endowed Schools. This organisation now comprises Stamford Junior School, a co-educational establishment for pupils aged between 2 and 11 years, Stamford School for boys aged 11–18, and Stamford High School catering for girls of the same age group. Sixth form teaching is carried out jointly between Stamford School and Stamford High School.

Lincolnshire County Council purchased places at the fee-paying schools from 1975 on the basis that Stamford had no grammar school (unlike the county's other towns). The Conservative-controlled County Council decided to end the scholarship scheme in 2006 and the 50 annual scholarship places[clarification needed] (at the cost of £1.9 million a year[citation needed]) will be gradually reduced to zero by 2012.

Stamford School has four senior (Y10–Y13) houses. These are called Brazenose (sic), Radcliffe, Ancaster and Exeter, there are also four junior house systems, each the same colour as their senior counterparts and are named St Peter's, St Paul's, Willoughby and Cecil respectively. There are also two boarding houses called Byard, for boys aged 11 to 14, and Browne, which houses boys aged 14 to 18. The four junior (Y7–Y9) houses are Cecil (feeder house to Exeter), Willoughby (feeder house to Ancaster), St. Paul’s (feeder house to Radcliffe) and St Peter’s (feeder house to Brazenose). The house names, which date back over half a century, reflect various aspects of the school's history. Brazenose and Radcliffe traditionally housed town boys, while Ancaster and Exeter accommodated boys who lived north and south respectively of the River Welland.

The school's crest is a stork with wings displayed on a wool bale over the motto + me spede, that Christ me spede. The emblem was adopted from medieval wool merchant, William Browne, after the school had been re-endowed from Browne's Charity in 1873. (The stork is supposed to be a rebus on his wife, Margaret's maiden name of Stoke). The current form was designed by Nelson Dawson. The crest is worn on the breast pocket of the blazer. Until 1960 all boys wore a white crest, nowadays however, the privilege of the white crest is worn by Sixth-Form prefects. Most boys wear a maroon crest. House prefects, in the lower school, wear a maroon crest with a maroon ribbon attached to the top of the pocket. Blue crests are worn by Fifth-Form prefects. Badges, awarded for extensive house activity are worn usually on the left lapel. Boys can be seen wearing an array of different school ties. Every boy receives his tie specific to his house upon joining the school, but may be awarded others as a mark of his achievements through the school. These include house colours, middle school colours, representative colours (known as half school colours), and full school colours. Stamford School Club ties are worn on Saturdays by boys representing the school in the day's fixtures. Lower school house captains are also awarded ties as are boarders from Browne and Byard Houses. All boys wear black or charcoal-grey trousers (shorts in the junior school) and a school blazer, which is navy blue.

Since 1885 The Stamfordian has been the school magazine of Stamford School. Currently published annually at the end of the Autumn term, it provides for current pupils and parents as well as Old Stamfordians and prospective parents an account of a year in the life of the school. It includes sections on:

Articles are written by staff and pupils and submitted for editing. The Stamfordian Team (a small group of staff and senior pupils) then work mostly after school and at weekends to collate written material and photographs for publication. The magazine is printed to a very high specification and distributed to all pupils. Copies are available from the school office. 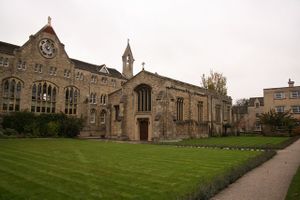 Literature and the arts

Academia and the Church

The recent issues of the Stamfordian magazine can be downloaded