Standing on the shoulders of giants

From Infogalactic: the planetary knowledge core
Jump to: navigation, search
For the Oasis album, see Standing on the Shoulder of Giants. For Stephen Hawking's book, see On the Shoulders of Giants (book). 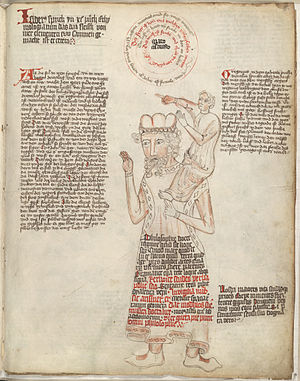 This picture is derived from Greek mythology, where the blind giant Orion carried his servant Cedalion on his shoulders.

The metaphor of dwarfs standing on the shoulders of giants (Latin: nanos gigantum humeris insidentes) expresses the meaning of "discovering truth by building on previous discoveries". While it can be traced to at least the 12th century, attributed to Bernard of Chartres, its most familiar expression in English is found in a 1676 letter of Isaac Newton:

If I have seen further, it is by standing on the shoulders of giants.

The attribution to Bernard is due to John of Salisbury. In 1159, John wrote in his Metalogicon:[1][2]

Bernard of Chartres used to compare us to [puny] dwarfs perched on the shoulders of giants. He pointed out that we see more and farther than our predecessors, not because we have keener vision or greater height, but because we are lifted up and borne aloft on their gigantic stature.[3]

According to medieval historian Richard Southern, Bernard is comparing the modern scholar (12th century) to the ancient scholars of Greece and Rome:[4]

[The phrase] sums up the quality of the cathedral schools in the history of learning, and indeed characterizes the age which opened with Gerbert (950–1003) and Fulbert (960–1028) and closed in the first quarter of the 12th century with Peter Abelard. [The phrase] is not a great claim; neither, however, is it an example of abasement before the shrine of antiquity. It is a very shrewd and just remark, and the important and original point was the dwarf could see a little further than the giant. That this was possible was above all due to the cathedral schools with their lack of a well-rooted tradition and their freedom from a clearly defined routine of study. 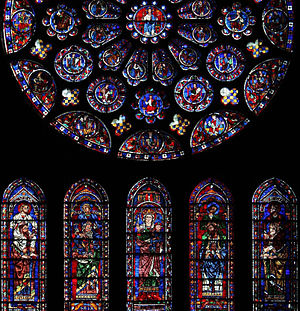 An illustration of New Testament evangelists on the shoulders of Old Testament prophets, looking up at the Messiah (from the south rose window of Chartres Cathedral)

The visual image (from Bernard of Chartres) appears in the stained glass of the south transept of Chartres Cathedral. The tall windows under the Rose Window show the four major prophets of the Hebrew Bible (Isaiah, Jeremiah, Ezekiel, and Daniel) as gigantic figures, and the four New Testament evangelists (Matthew, Mark, Luke, and John) as ordinary-size people sitting on their shoulders. The evangelists, though smaller, "see more" than the huge prophets (since they saw the Messiah about whom the prophets spoke).

Should Joshua the son of Nun endorse a mistaken position, I would reject it out of hand, I do not hesitate to express my opinion, regarding such matters in accordance with the modicum of intelligence alloted to me. I was never arrogant claiming "My Wisdom served me well". Instead I applied to myself the parable of the philosophers. For I heard the following from the philosophers, The wisest of the philosophers asked: "We admit that our predecessors were wiser than we. At the same time we criticize their comments, often rejecting them and claiming that the truth rests with us. How is this possible?" The wise philosopher responded: "Who sees further a dwarf or a giant? Surely a giant for his eyes are situated at a higher level than those of the dwarf. But if the dwarf is placed on the shoulders of the giant who sees further? ... So too we are dwarfs astride the shoulders of giants. We master their wisdom and move beyond it. Due to their wisdom we grow wise and are able to say all that we say, but not because we are greater than they.

References during the sixteenth to nineteenth centuries 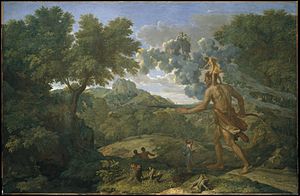 Diego de Estella took up the quote in the 16th century; by the 17th century it had become commonplace. Robert Burton, in The Anatomy of Melancholy (1621), quotes Stella thus:

I say with Didacus Stella, a dwarf standing on the shoulders of a giant may see farther than a giant himself.

Later editors of Burton misattributed the quote to Lucan; in their hands Burton's attribution Didacus Stella, in luc 10, tom. ii "Didacus on the Gospel of Luke, chapter 10; volume 2" became a reference to Lucan's Pharsalia 2.10. No reference or allusion to the quote is found there.

Later in the 17th century, George Herbert, in his Jacula Prudentum (1651), wrote "A dwarf on a giant's shoulders sees farther of the two."

What Des-Cartes [sic] did was a good step. You have added much several ways, & especially in taking the colours of thin plates into philosophical consideration. If I have seen further it is by standing on the sholders [sic] of Giants.

This has recently been interpreted by a few writers as a sarcastic remark directed at Hooke's appearance.[7] Although Hooke was not of particularly short stature, he was of slight build and had been afflicted from his youth with a severe kyphosis. However, at this time Hooke and Newton were on good terms and had exchanged many letters in tones of mutual regard. Only later, when Robert Hooke criticized some of Newton's ideas regarding optics, Newton was so offended that he withdrew from public debate, and the two men remained enemies until Hooke's death.

The dwarf sees farther than the giant, when he has the giant's shoulder to mount on.

Against this notion, Friedrich Nietzsche argues that a dwarf (the academic scholar) brings even the most sublime heights down to his level of understanding. In the section of Thus Spoke Zarathustra (1882) entitled "On the Vision and the Riddle", Zarathustra climbs to great heights with a dwarf on his shoulders to show him his greatest thought. Once there however, the dwarf fails to understand the profundity of the vision and Zarathustra reproaches him for "making things too easy on [him]self." If there is to be anything resembling "progress" in the history of philosophy, Nietzsche in "Philosophy in the Tragic Age of the Greeks" (1873) writes, it can only come from those rare giants among men, "each giant calling to his brother through the desolate intervals of time," an idea he got from Schopenhauer's work in Der handschriftliche Nachlass.[8]