Stanford is a city in Lincoln County, Kentucky, United States. It is one of the oldest settlements in Kentucky, having been founded in 1775. Its population was 3,487 at the 2010 census. It is the county seat of Lincoln County.[1] Stanford is part of the Danville Micropolitan Statistical Area. 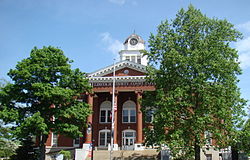 Stanford was founded in 1775 by Benjamin Logan as Logan's Fort, alternately known as St. Asaph, the name given it by Logan.[2] The site of the fort is about one mile west of the courthouse at the center of town. The name "Fort Logan" is still used to this day by local businesses, including the Fort Logan Hospital and Standing Fort Collectibles. The main street was built on what was originally a buffalo trail.[3]

The name Stanford may have come from "Standing Fort", which Fort Logan became known as because it survived multiple attacks by British-led Native Americans during the American Revolution. Alternately, it may have been named for Stamford, England.[2] Although it was one of the smaller pioneer forts, it never fell to an attack. In 1781, the original settlement expanded when Benjamin Logan donated part of his own land as the site for a courthouse.

Nevertheless, the county court met at Fort Harrod (now Harrodsburg) until 1785, when Mercer County was established. By 1786 Stanford had received its charter, making it one of the first towns in the former (1776–1780) Kentucky County, Virginia, with a formal charter. In 1787 the courthouse opened in a building made of logs. It has been expanded and upgraded over time, the courthouse remains on the same site. Unlike most courthouses in Kentucky, it has never suffered from a fire or other major loss of records. Lincoln County has all its original records and archives dating from November 1789, making it one of the more complete archives in Kentucky. Among its original land deeds kept on vellum are deeds granting land to both Daniel Boone and Simon Kenton,

The first recorded church in Stanford was a Presbyterian church built in 1790, reflecting the staunch Presbyterian beliefs of the Logan family. The building still stands and is now part of the Harvey Helm Memorial Historic Library and Museum on Main Street. Other denominations, including Baptist and Methodist, were not established in the area until the 1830s. The current Presbyterian Church in Stanford has stood on the same site since around 1850.[3]

A small local library was first established in the 1830s. The library was renamed in 1970 in honor of Harvey Helm, a native son who became a Kentucky statesman and member of the United States House of Representatives between 1909 and 1917.[3]

The first school was built sometime in the 1850s, as the Male Academy. It was established in a building that is now the Fox Funeral Home on West Main Street. The corresponding Female Academy was built in the 1870s. The Stanford School was founded in 1900, and after much expansion, still serves, now as the Lincoln County Alternative school.[3]

Largely untouched by the American Civil War (the nearest conflict was the Battle of Perryville, 20 miles (32 km) away), Stanford grew significantly in the post-war period. In the late 1860s, the town gained own newspaper, the Stanford Banner, which is still publishing as the Interior Journal. The city continued to grow, especially after the Louisville and Nashville Railroad built a station and line into the town in late 1865. Now the railroad line has closed, and even the tracks were removed in 1988, leaving only a small spur line that connects to Mount Vernon, Kentucky. However, the railway depot has been restored, and Stanford is notable as the location of the first automobile garage in Kentucky, which opened in 1905.

According to the United States Census Bureau, the city has a total area of 3.1 square miles (8.0 km2), all land.

There were 1,417 households out of which 29.6% had children under the age of 18 living with them, 46.1% were married couples living together, 15.9% had a female householder with no husband present, and 35.1% were non-families. 31.8% of all households were made up of individuals and 15.2% had someone living alone who was 65 years of age or older. The average household size was 2.27 and the average family size was 2.85.