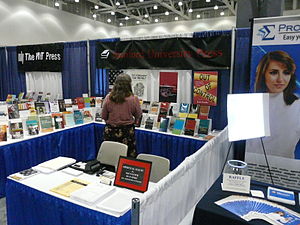 In 1999, the press became a division of the Stanford University Libraries. It was located on Page Mill Road in the Stanford Research Park to the southeast of the Stanford campus before moving to its current location, Redwood City, in 2012-2013.[1] It publishes about 130 books per year. Stanford relies on the University of Chicago Press to perform the actual distribution of titles.[2]

In 1933, David Lamson, a sales manager at SUP, was accused of murdering his wife, Allene, at their home on the Stanford campus. Janet Lewis, wife of Stanford poet Yvor Winters, campaigning for Lamson's acquittal, wrote a pamphlet emphasizing the dangers of using circumstantial evidence. Lamson was ultimately acquitted of murder.[3]