From Infogalactic: the planetary knowledge core
Jump to: navigation, search
For other uses of "Stanisław Kostka", see Stanisław Kostka (disambiguation).

Stanisław Kostka S.J. (28 October 1550 – 15 August 1568) was a Polish novice of the Society of Jesus. In the Catholic Church he is venerated as Saint Stanislaus Kostka.

His father, Jan (John) Kostka, was a senator of the Kingdom of Poland and Lord of Zakroczym; his mother was Małgorzata Kryska from Drobni (Margaret de Drobniy Kryska), the sister and niece of the voivodes of Masovia and the aunt of the celebrated Chancellor of Poland, Feliks Kryski (Felix Kryski)(Szczęsny Kryski). He was the second of seven children. His older brother Paweł (Paul) survived to be present at beatification ceremony of Stanislaus in 1605. At home, the two brothers were taught with firmness, even severity; its results were their piety, modesty, temperance, and submission.

On 25 July 1564, they arrived at Vienna with their tutor to attend the Jesuit college that had been opened four years before. Stanislaus was soon conspicuous, among his classmates during his 3 years of schooling, not only for his amiability and cheerfulness of expression, but also for his growing religious fervour and piety. His brother Paul said during the process of beatification: "He devoted himself so completely to spiritual things that he frequently became unconscious, especially in the church of the Jesuit Fathers at Vienna. It is true," added the witness, "that this had happened at home to my brother at Easter when he was seated at table with our parents and other persons." Among other practices of devotion he joined while at Vienna the Congregation of St. Barbara, to which many students of the Jesuit college belonged. If the confidences he then made to his tutor and later to a fellow-member of the Society at Rome are to be believed, it was Saint Barbara who brought two angels to him during the course of a serious illness, in order to give him the Eucharist. So much piety, however, did not please the older brother Paul; his exasperation led him to treat the innocent Stanislaus with violence. Stanislaus suffered the unjust treatment with remarkable stoicism and patience, but there came one night when, after having again suffered the harsh comments and blows from his brother, he turned on Paul with the words: "Your rough treatment will end in my going away never to return, and you will have to explain my leaving to our father and mother." Paul's sole reply was to swear violently at him.

Entry into the Society of Jesus

Meantime the thought of joining the Society of Jesus had already entered his mind. It was six months, however, before he ventured to speak of this to the superiors of the Society. At Vienna they hesitated to receive him, fearing the tempest that would probably be raised by his father against the Society, which had just quieted a storm unleashed by others entering the Order. Stanislaus quickly grasped the situation and formed the plan of applying to the general of the Society at Rome. The distance was five hundred leagues, which had to be made on foot, without equipment, or guide, or any other resources but the precarious charity that might be received on the road. The prospective dangers and humiliations of such a journey, however, did not deter him.

On the morning of the day on which he was to carry out his project he called his servant to him early and told him to notify his brother Paul and his tutor in the course of the morning that he would not be back that day to dinner. Then he started, exchanging the dress of gentleman for that of a mendicant, which was the only way to escape the curiosity of those he met. By nightfall Paul and the tutor comprehended that Stanislaus had fled as he had threatened. They were seized with a fierce anger, and as the day was ended the fugitive had gained a day over them. They started to follow him, but were not able to overtake him; either their exhausted horses refused to go further, or a wheel of their carriage would break, or, as the tutor frankly declared, they had mistaken the route, having left the city by a different road from the one which Stanislaus had taken. It is noticeable that in his testimony Paul gives no explanation of his ill-luck. 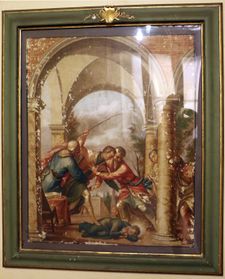 Stanislaus Kostka beaten by his brother, painting by Andrea Pozzo

Stanislaus stayed for a month at Dillingen, where the provincial of that time, the Saint Peter Canisius, put the young aspirant's vocation to the test by employing him in the boarding-school. He arrived 25 October 1567 in Rome. As he was greatly exhausted by the journey, the general of the order, Saint Francis Borgia, would not permit him to enter the novitiate of Saint Andrew until several days later. During the ten remaining months of his life, according to the testimony of the master of novices, Father Giulio Fazio, 'he was a model and mirror of religious perfection. Notwithstanding his very delicate constitution he did not spare himself the slightest penance.[1] He had such a burning fever his chest that he was often obliged to apply cold compresses. 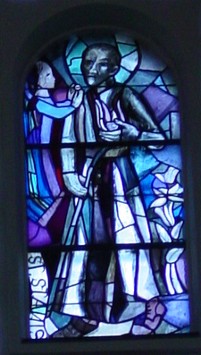 On the eve of the feast of Saint Lawrence, Stanislaus felt a mortal weakness made worse by a high fever, and clearly saw that his last hour had come. He wrote a letter to the Blessed Virgin begging her to call him to the skies there to celebrate with her the glorious anniversary of her Assumption.[2] His confidence in the Blessed Virgin, which had already brought him many signal favours, was this time again rewarded; on 15 August, towards four in the morning, while he was rapt in pious utterances to God, to the saints, and to the Virgin Mary, he died. The entire city proclaimed him a saint and people hastened from all parts to venerate his remains and to obtain, if possible, some relics.[3]

The Holy See ratified his beatification in 1605; he was canonized in 1726. St. Stanislaus is a popular saint of Poland and many religious institutions have chosen him as the protector of their novitiates. The representations of him in art are very varied; he is sometimes depicted receiving Holy Communion from the hands of angels; sometimes receiving the Infant Jesus from the hands of the Virgin; or he is shown in the midst of a battle putting to flight the enemies of his country. At times he is depicted near a fountain putting a wet linen cloth on his breast. He is invoked for palpitations of the heart and for dangerous cases of illness (Cahier, "Caractéristiques des Saints").

There is a portrait by Scipione Delfine and the oldest of St. Stanislaus in existence. Having probably been painted at Rome the year of his death, perhaps after death, it may be regarded as the best likeness. The face is strikingly Slavic, a fact that is not noticeable in his other portraits. Pierre Le Gros the Younger also portrayed him as a statue. 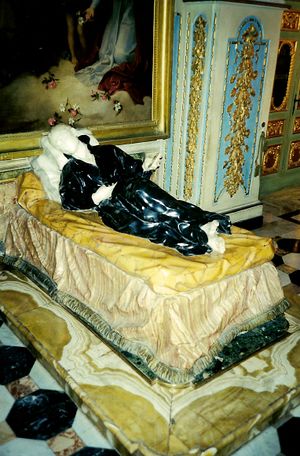 St. Thérèse of Lisieux wrote a “play” or “pious recreation” about Saint Stanislaus Kostka. Her sister Pauline had asked Thérèse to write verses and theatrical entertainment for liturgical and community festivals.

San Stanislao Kostka, a church in Palermo, Sicily. Saint Stanislaus College in Bay Saint Louis, Mississippi, a Catholic day and residential school for boys in grades 7 to 12, founded in 1854 and chartered in 1870 as Saint Stanislaus College. The novitiate of the Missouri and New Orleans Provinces of the Society of Jesus—The Jesuit novitiate of Saint Stanislaus Kostka at Saint Charles College—located in Grand Coteau, Louisiana is dedicated under his patronage. Saint Stanislaus is also a co-patron saint (along with Saint Ignatius of Loyola, founder of the Society of Jesus) of Strake Jesuit College Preparatory in Houston, Texas. A statue of his image was erected and is located in front of the Parsley Center, which houses an auditorium and music facilities. In 2008, Saint John's Jesuit of Toledo, Ohio adopted a house system to their High School: there are eight houses all named after Jesuit Saints, one of them being Kostka. St. Stanislaus Catholic Church in the Historic Polonia District of Buffalo, New York, was founded in 1873.

St. Stanislaus High School in Bandra, Bombay is named after him and was founded in 1863. The school is run by Jesuits.

The St. Stanislaus Institute in Ljubljana, Slovenia, an educational institution founded in 1901, is named for Stanislaus Kostka.[4] 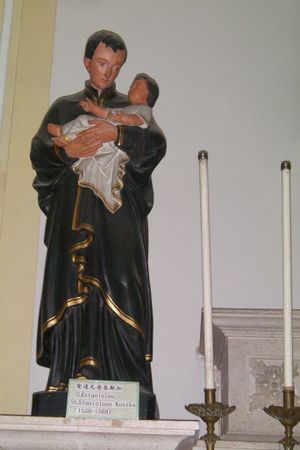 The high school campus of the Ateneo de Manila University has a Saint Stanislaus Kostka chapel, noticeably at the center of the compound. Saint Kostka is also the patron saint of the Ateneo de Manila High School. The grade school campus also has a section in the seventh grade after him. In Sacred heart School-Ateneo de Cebu both Grade 4 & Grade 8 have a section named after him. As for the Ateneo de Davao University, the grade school chapel, adorned with stained glass depictions of the life of Jesus Christ, was named after him.

A school was named after him, it is the Kostka School of Quezon CIty located at Katipunan Avenue, Quezon City in front of Ateneo de Manila University, and Kostka School of Marikina located at Marikina Heights, Marikina City.[citation needed] Saint Stanislaus Kostka is the patron saint of the attendees of Oblates of Saint Joseph Minor Seminary (a high school-level seminary in San Jose, Batangas, Philippines), as well as Manukan, Zamboanga del Norte Philippines.

One of the junior campuses of the Jesuit school Xavier College in Melbourne, Australia, is named Kostka Hall; Boston College also has named one of their freshman dorms Kostka Hall. He is also a patron of the minor seminarians of the Oblates of St. Joseph Minor Seminary.

Beaumont College, formerly a public school in Berkshire, was dedicated to Saint Stanislaus. Saint Stanislaw Kostka is also the patron saint of The Polish Saturday School in Manchester, Lancashire – [1] - which was founded in 1949 by the Manchester Polish Ex-Combatants Association and which supports the school to this day. The Polish name of the school is Polska Szkoła Przedmiotów Ojczystych im. św. Stanisława Kostki w Manchesterze.

Also, a public school in Guyana is named after him. It is the St. Stanislaus College.

In September, 2011, St. Stanislaus Kostka Parish began a project of essential repair and restoration of the church building. The vision is that the parish will continue to be a beacon of hope for the next generations of Catholics of Chicago.