From Infogalactic: the planetary knowledge core
Jump to: navigation, search
This article is about the village. For other uses, see Stanwell (disambiguation).

Stanwell is an urban and suburban village located in the Surrey borough of Spelthorne, 15.7 miles (24.8 km) WSW of Charing Cross and centred half a mile (0.8 km) from the southern boundary of London Heathrow Airport, adjoining its cargo depot. It is the northernmost settlement in Surrey.

The 'village' of Stanwell Moor, a semi-rural neighbourhood has broken away from Stanwell by having its own village association, and is separated from the village centre by a field, large reservoir and dual carriageway, which includes most of the remaining village farms. However it is included within a ward and parish of Stanwell. In common, both localities have large areas of reservoir and are within 2 miles (3.2 km) of a junction of the M25 London Orbital Motorway. To the west of the village proper stretch further areas of open land, much of which is part of the Metropolitan Green Belt and is important primarily for fish and bird life, including the Staines Moor SSSI and the Colne Valley regional park.

Stanwell lost land to a fraction of the adjoining airport and to Berkshire in the mid and late 20th century respectively. Its main industrial and business area, Poyle, broke away to join Colnbrook, Berkshire in 1995 due to the completion of the M25 London Orbital Motorway. Stanwell is adjoined by two towns and includes Ashford Hospital and the Staines Reservoirs named after these. The largest of its neighbours is Staines upon Thames which is a retail, entertainment, dining and leisure venue and has corporate offices. The nearest railway station is centred 1 mile (1.6 km) south, or 1.5 miles south of the parish church in the conservation area of the village. 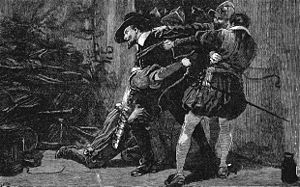 The first secular (and non-royal) owner, of the land representing most of Staines and Stanwell since the Norman Conquest, was Thomas Knyvet, 1st Baron Knyvet.

He arrested Guy Fawkes in the cellar of the Houses of Parliament when Fawkes was planting explosives to kill King James VI and I and was convicted of high treason while rough justice was dispensed on others alleged to have conspired. Knyvet's actions and those of the Catholic peer who was forewarned, and Edward Doubleday in preventing this intended murder are celebrated annually on Bonfire Night.

He was often seated in his earlier acquisition at Stanwell Manor, Stanwell and rented Knyvett House on the site of what later became 10 Downing Street, Westminster.

There are two theories regarding the origin of the name Stanwell. One is that it was named after St Ann(e)'s well in the village but the parish church has been dedicated according to all known records to St Mary. The second is that it means 'stone well' in turn referring to stony soil or the adjoining street to the south. The first few letters of the name are the same as in the name of neighbouring Staines-upon-Thames, which also is said to mean 'stones', in the same way as the Great Vowel Shift failed to influence the spelling and pronunciation of the contemporaneously pronounced Stane Streets (i.e. stone streets), the Old English for many of the stone-laid Roman roads in Britain.

Stanwell appears in the Domesday Book of 1086 as 'Stanwelle' held by Walter, son of Othere, Anglo Saxon names. Its domesday assets were: 15 hide, 4 mills worth £3 10s 0d and 375 eels, 3 weirs worth 1000 eels, 10 ploughs, meadow for 12 ploughs and woodland worth 12 hogs. It rendered £14 per year to its feudal system overlords. The fruitful watercourse was the western border of the village and of Middlesex, the River Colne[2] West Bedfont may have been a hamlet of Stanwell in 1086 however the dividing line between West Bedfont hamlet in Stanwell parish and East Bedfont in the parish of Bedfont (now in Greater London) may not have been drawn before the 11th or 12th century. In the Middle Ages the parish was mostly open fields[3]

In 1603, Thomas/Lord Knyvet(t) was granted the manor of Stanwell. Thomas Knyvett was the man who arrested Guy Fawkes in his attempt to blow up the Houses of Parliament. In his will Lord Knyvett made provision for the foundation of free school in Stanwell and the school was founded in 1624.[4] The school building still exists in the High Street, converted into residential flats. James VI and I's daughter Princess Mary died at Stanwell and several members of the aristocracy lived there in the 17th and 18th centuries. The Cox's Orange Pippin was first grown c. 1830 by Richard Cox in his garden on the Bath Road within the parish, see Colnbrook which now has this piece of land.[3]

In 1838, an unknown species of rose was found in a local garden and given the name of Stanwell Perpetual.

Until 1792 Hounslow Heath extended over the area north of Bedfont Road, and a strip of moorland (Borough Green and Spout Moor) along the present Spout Lane joined it to Hither Moor and Farther Moor, which stretched towards Staines Moor. There were lammas lands in the far east and elsewhere and meadows along many of the river banks, particularly in the north, but the remainder of the parish was largely arable land. Nearly all the land west of Stanwell Moor's clustered centre and that around Hammonds Farm was enclosed by the mid-18th century. Borough Field, to the north and west of the manor-house, and another small field nearby were inclosed in 1771 by the lord of the manor. Most of the area south of Stanwell and West Bedfont villages remained open until 1792 on their enclosure.[3]

By the 18th century the remaining common land was generally known as Stanwell Field or Town Field before its enclosure (privatisation). Orchards and marketgardens began to spread over the parish in the second half of the 19th century. In 1884 the Staines and West Drayton Railway (now closed) was opened, with a station formerly in Stanwell parish at Poyle, named Colnbrook, after the then neighbouring village. The streets of small houses behind the southwest 'Crooked Billet' roundabout (named after a demolished pub) were built in the 1880s. They really formed part of Staines and were transferred to it officially in 1896.

The Staines Union Workhouse was built on the London Road in the mid-19th century. Together with a former boys' home and a former isolation hospital, both opened c. 1913, it became Ashford Hospital. Two large cemeteries open near the A30 between 1895 and 1910. The Staines Reservoirs were completed in 1902 and started supplying water to London in 1904, covering 180 hectares (440 acres).

The two old settlements grew a little, notably by the building of council housing estates in Stanwell in 1919 and in Stanwellmoor in 1930. A private motor-bus served the village by 1926 and London Transport buses began in 1932. Poyle Halt on the defunct railway opened in 1927 and Poyle Industrial Estate Halt in 1953. After the Second World War, housing society and council house building began including 300 pre-fabricated homes. From 1930, having formed part of a 19th-century Sanitary District then Rural District, Stanwell was administered by a U.D. of Middlesex until its 1974 dissolution. In 1965[5] were it not for special provision Stanwell would have seceded with the rest of Middlesex to London: the Staines, Sunbury and Potters Bar Urban Districts transferred variously to Surrey and Hertfordshire, the most distant parts of the county from London.[3]

In the north of what was Stanwell, off Spout Lane, Heathrow Middlesex County Council established 24 small holdings in the early 1930s: Burrows Hill Close estate and Bedfont Court. In 1948 the part of Stanwell New Road north of Park Road opened as a main north-south route. In 1949 most of the former Hounslow Heath land to the north-west of the village became London Airport, the eastern part of 'the Bedfont Road' diverted and the roads running north from it were closed, together with the eastern half of Spout Lane, where houses were demolished.[3]

In 2004, the village won a Bronze Medal in the national Britain In Bloom[6] competition in the urban community category.

Stanwell's 12th-century church of St Mary the Virgin has an active Christian community.[7] It contains monuments to the Knyvet(t)s who bought Staines manor after their unfoiling of the planting of the gunpowder and Fawkes. It is Grade I listed, the highest category architecturally, fusing Norman and Gothic elements including a 14th-century spire.[8]

Stanwell Place was a grand manor house from the 17th century 0.5 miles (0.80 km) west of the village church, north of Park Road.[9] The Gibbons family owned the manorial rights from 1754 to 1933,[10][11] and slowly sold off the estate from the 1800s. Sold to John Watson Gibson in 1933, four years later 330 acres (1.3 km2) were sold off to the Metropolitan Water Board for the development of the King George VI Reservoir, now in Staines. After Gibson's death in 1947, Stanwell Place was sold to King Faisal II of Iraq who owned it until his assassination in 1958.[11] The estate was then purchased for gravel extraction, and despite local attempts to prevent it, the house was allowed to become derelict, and demolished in the 1960s.

What was the north of the parish is a major industrial, distribution and headquarters zone, bound up now in the broad expression 'the M4 corridor'. There was little building in the parish before World War I. The first factory/warehouse at Poyle appeared before 1914 another at West Bedfont in the 1920s. By 1956 there were between 70 and 80 at Poyle, and several at West Bedfont. During the 1920s and 1930s ribbon development spread along the main roads: on the A4 Bath Road Colnbrook remains mainly residential. Garages and a few small factories (now motor manufacturer garages and offices) cropped up by the 1950s and remain along the A30 London Road, including Del Monte, Ford and Suzuki.[3]

At one point British Mediterranean Airways was headquartered at the Cirrus House within the post town but in the London Borough of Hounslow,[12][13] near Stanwell.[14]

The average level of accommodation in the region composed of detached houses was 28%, the average that was apartments was 22.6%.