The origin of the name of Staraya Russa is unclear. The most involved and widespread hypothesis was presented by philologists and linguists R. A. Akheyeva, V. L. Vasilyev, and M.V. Gorbanevsky. According to this hypothesis, Russa comes from Rus'—a people of Finno-Ugric and Varangian composition who settled in the vicinity to control trade routes leading from Novgorod to Polotsk and Kiev—which, in turn, originates from the hydronym "Porus River", which in ancient times was known as "Rus'".

Thought to have originated in the mid-10th century, it was first mentioned as Rusa (Cyrillic: Руса) in chronicles for the year 1167[7] as one of three main towns of the Novgorod Republic, alongside Pskov and Ladoga. After Pskov became independent, Russa became the second most important town and trade center of the Novgorod Republic after Novgorod itself.[citation needed] By the end of the 15th century, it contained about one thousand homesteads. Brine springs made the saltworks the principal business activity in the town, which was the biggest center of salt industry in the Novgorod region.[12]

The wooden fortifications of Russa burned to ashes in 1190 and then in 1194, after which they were replaced by the stone fortress. In 1478, it was incorporated into the Grand Duchy of Moscow together with Novgorod. The word Staraya (Old) was prefixed to the name in the 15th century, to distinguish it from newer settlements called Russa. Nevertheless, the current name firmly established only in the 19th century, when the salt mining settlements around the town became collectively known as Novaya Russa (New Russa).[citation needed]

When Ivan the Terrible ascended the throne in 1533, Staraya Russa was a populous town. During the Time of Troubles, it was held by Polish brigands and heavily depopulated. Only thirty-eight people lived there in 1613.

In the course of the administrative reform carried out in 1708 by Peter the Great, Staraya Russa was included into Ingermanland Governorate (known since 1710 as St. Petersburg Governorate). In 1727, separate Novgorod Governorate was split off. In 1776, Staraya Russa became the seat of Starorussky Uyezd of Novgorod Viceroyalty. In 1796, the viceroyalty was transformed into Novgorod Governorate. In the 1820s, military settlements were organized in Staraya Russa and around, in accordance with the project designed by Aleksey Arakcheyev, an influential statesman. It was inconvenient to have both civil and military administration in Staraya Russa, and therefore the uyezd was abolished in 1824. The town of Staraya Russa and some adjacent territories were directly subordinated to the Defense Ministry. The military settlements were proven inefficient, in particular, in 1831, the area participated in the Cholera Riots.[clarification needed] They were abolished in 1856. In 1857, Starorussky Uyezd was re-established.[13]

The Soviet authority in Staraya Russa was established on November 5(18), 1917.

On September 19, 1939, Staraya Russa was elevated in status to that of a town of oblast significance and thus ceased to be a part of the district.[15] The town was occupied by the Germans between August 9, 1941 and February 18, 1944. Totally destroyed during the war, it was later restored. On July 5, 1944, Staraya Russa was transferred to newly established Novgorod Oblast and remained there ever since.[15] On February 16, 1984, Staraya Russa was awarded the Order of the Patriotic War. 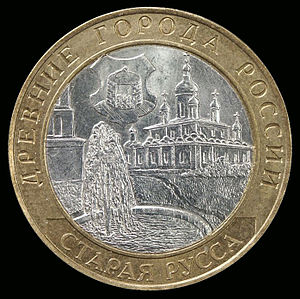 The biggest enterprise in Staraya Russa is the aircraft repair works. The mechanical engineering plant went bankrupt in 2011 and no longer exists.[16]

A railway which connects Bologoye and Pskov passes through Staraya Russa.

Staraya Russa is connected by roads with Novgorod, Demyansk, and Bezhanitsy via Kholm. There are also local roads.

There is a wharf on the Polist River in the Lake Ilmen basin. The Polist is navigable downstream from Staraya Russa.

The town is served by the Staraya Russa Airport.

Staraya Russa is a balneologic resort, celebrated for its mineral springs used for baths, drinking, and inhalations; medicinal silt mud of Lakes Verkhneye and Sredneye and mud from artificial reservoirs. A summer residence of the Russian novelist Fyodor Dostoyevsky, who wrote his novels The Brothers Karamazov and Demons there, is open to visitors as a museum. 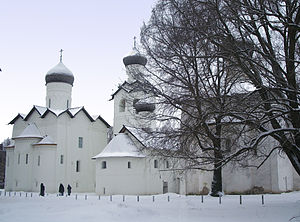 Monuments include the Transfiguration Monastery, which includes a cathedral built in seventy days in 1198 and partly rebuilt in the 15th century, and several 17th-century buildings and churches. The principal city cathedral (1678) is dedicated to the Resurrection of Christ. Other notable churches are consecrated to St. George (1410) (the Dostoyevsky family stayed in the house of the priest of this church[17]), Mina the Martyr (14th century), and the Holy Trinity (1676). 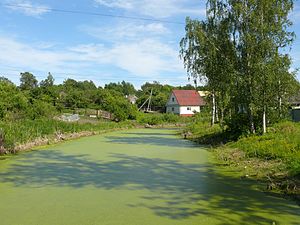 The Malashka River in Staraya Russa