From Infogalactic: the planetary knowledge core
Jump to: navigation, search
This article is about extreme malnutrition. For other uses, see Starvation (disambiguation).

Starvation is a severe deficiency in caloric energy intake needed to maintain human life. It is the most extreme form of malnutrition. In humans, prolonged starvation can cause permanent organ damage[1] and eventually, death. The term inanition refers to the symptoms and effects of starvation. Starvation may also be used as a means of torture or execution.

According to the World Health Organization, hunger is the single gravest threat to the world's public health.[2] The WHO also states that malnutrition is by far the biggest contributor to child mortality, present in half of all cases.[2] Undernutrition is a contributory factor in the death of 3.1 million children under five every year.[3] Figures on actual starvation are difficult to come by, but according to the Food and Agriculture Organization, the less severe condition of undernourishment currently affects about 842 million people, or about one in eight (12.5%) people in the world population.[4]

The bloated stomach, as seen in the picture to the right, represents a form of malnutrition called kwashiorkor which is caused by insufficient protein despite a sufficient caloric intake.[5] Children are more vulnerable to kwashiorkor whose advanced symptoms include weight loss and muscle wasting.[5] 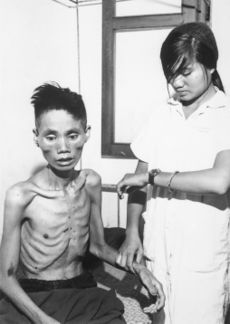 Starved Vietnamese man, who was deprived of food in a Viet Cong prison camp.

The basic cause of starvation is an imbalance between energy intake and energy expenditure. In other words, the body expends more energy than it takes in. This imbalance can arise from one or more medical conditions and/or circumstantial situations, which can include:

The main causes of starvation are as follows:

There is insufficient scientific data on exactly how long people can live without food.[6] Although the length of time obviously varies with an individual's percentage of body fat and general health, one medical study estimates that in adults complete starvation leads to death within 8 to 12 weeks.[7] There are isolated cases of individuals living up to 25 weeks without food.[8] Starvation begins when an individual has lost about 30% of his normal body weight.[9] Once the loss reaches 40% death is almost inevitable.[9]

Individuals experiencing starvation lose substantial fat (adipose) and muscle mass as the body breaks down these tissues for energy.[10] Catabolysis is the process of a body breaking down its own muscles and other tissues in order to keep vital systems such as the nervous system and heart muscle (myocardium) functioning. Vitamin deficiency is a common result of starvation, often leading to anemia, beriberi, pellagra, and scurvy. These diseases collectively can also cause diarrhea, skin rashes, edema, and heart failure. Individuals are often irritable and lethargic as a result.

Early symptoms include impulsivity, irritability, hyperactivity, and other symptoms. Atrophy (wasting away) of the stomach weakens the perception of hunger, since the perception is controlled by the percentage of the stomach that is empty. Victims of starvation are often too weak to sense thirst, and therefore become dehydrated. 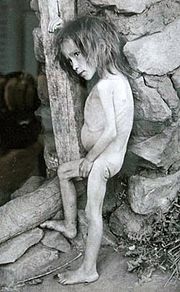 Starving Russian girl during the Russian famine of 1921

All movements become painful due to muscle atrophy and dry, cracked skin that is caused by severe dehydration. With a weakened body, diseases are commonplace. Fungi, for example, often grow under the esophagus, making swallowing painful.

The energy deficiency inherent in starvation causes fatigue and renders the victim more apathetic over time. As the starving person becomes too weak to move or even eat, their interaction with the surrounding world diminishes. In females, menstruation ceases when the body fat percentage is too low to support a fetus.

When food intake ceases, the body enters the starvation response[citation needed]. Initially, the body's glycogen stores are used up in about 24 hours.[citation needed] The level of insulin in circulation is low and the level of glucagon is very high. The main means of energy production is lipolysis. Gluconeogenesis converts glycerol into glucose and the Cori cycle converts lactate into usable glucose. Two systems of energy enter the gluconeogenesis: proteolysis provides alanine and lactate produced from pyruvate, while acetyl CoA produces dissolved nutrients (ketone bodies), which can be detected in urine and are used by the brain as a source of energy.

For the individual, prevention consists of ensuring they eat plenty of food, varied enough to provide a nutritionally complete diet.

Starvation can be caused by factors, other than illness, outside of the control of the individual. The Rome Declaration on World Food Security outlines several policies aimed at increasing food security[11] and, consequently, preventing starvation. These include:

Supporting farmers in areas of food insecurity through such measures as free or subsidized fertilizers and seeds increases food harvest and reduces food prices.[12]

Starving patients can be treated, but this must be done cautiously to avoid refeeding syndrome.[13] Rest and warmth must be provided and maintained. Small sips of water mixed with glucose should be given in regular intervals. Fruit juices can also be given. Later, food can be given gradually in small quantities. The quantity of food can be increased over time. Proteins may be administered intravenously to raise the level of serum proteins.[14]

Many organizations have been highly effective at reducing starvation in different regions. Aid agencies give direct assistance to individuals, while political organizations pressure political leaders to enact more macro-scale policies that will reduce famine and provide aid.

According to estimates by the Food and Agriculture Organization there were 925 million under- or malnourished people in the world in 2010.[15] This was a decrease from an estimate of 1023 million malnourished people in 2009.[16] In 2007, 923 million people were reported as being undernourished, an increase of 80 million since 1990-92.[17] It has also been recorded that the world already produces enough food to support the world's population. 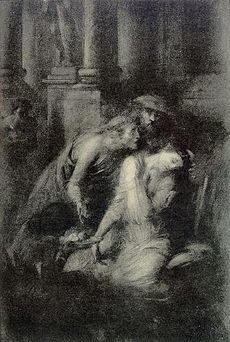 The starving Livilla refusing food.
From a drawing by André Castagne

Historically, starvation has been used as a death sentence. From the beginning of civilization to the Middle Ages, people were immured, or walled in, and would die for want of food.

In ancient Greco-Roman societies, starvation was sometimes used to dispose of guilty upper class citizens, especially erring female members of patrician families. For instance, in the year 31, Livilla, the niece and daughter-in-law of Tiberius, was discreetly starved to death by her mother for her adulterous relationship with Sejanus and for her complicity in the murder of her own husband, Drusus the Younger.

Another daughter-in-law of Tiberius, named Agrippina the Elder (a granddaughter of Augustus and the mother of Caligula), also died of starvation, in 33 AD. (However, it is not clear whether or not her starvation was self-inflicted.)

A son and daughter of Agrippina were also executed by starvation for political reasons; Drusus Caesar, her second son, was put in prison in 33 AD, and starved to death by orders of Tiberius (he managed to stay alive for nine days by chewing the stuffing of his bed); Agrippina's youngest daughter, Julia Livilla, was exiled on an island in 41 by her uncle, Emperor Claudius, and not much later, her death by starvation was arranged by the empress Messalina.

It is also possible that Vestal Virgins were starved when found guilty of breaking their vows of celibacy.

Ugolino della Gherardesca, his sons and other members of his family were immured in the Muda, a tower of Pisa, and starved to death in the thirteenth century. Dante, his contemporary, wrote about Gherardesca in his masterpiece The Divine Comedy.

In Sweden in 1317, King Birger of Sweden imprisoned his two brothers for a coup they had staged several years earlier (Nyköping Banquet). According to legend they died of starvation a few weeks later, since their brother had thrown the prison key in the castle moat.

In the English county of Cornwall in 1671, John Trehenban from St Columb Major was condemned to be starved to death in a cage at Castle An Dinas for the murder of two girls.

Saint Maximilian Kolbe, a martyred Polish friar, underwent a sentence of starvation in Auschwitz concentration camp in 1941. Ten prisoners had been condemned to death by starvation in the wake of a successful escape from the camp. Kolbe volunteered to take the place of a man with a wife and children. After two weeks of starvation, Kolbe and three other inmates remained alive; these were then executed with injections of phenol.

The Makah, a Native American tribe inhabiting the Pacific Northwest near the modern border of Canada and the United States, practiced death by starvation as a punishment for slaves.[21]