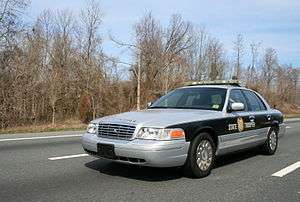 In the United States, state police are a police body unique to each U.S. state, having statewide authority to conduct law enforcement activities and criminal investigations. In general, they perform functions outside the jurisdiction of the county sheriff (Vermont being a notable exception), such as enforcing traffic laws on state highways and interstate expressways, overseeing the security of the state capitol complex, protecting the governor, training new officers for local police forces too small to operate an academy and providing technological and scientific services. They support local police and help to coordinate multi-jurisdictional task force activity in serious or complicated cases in those states that grant full police powers statewide.

The Texas Rangers are the earliest form of state law enforcement in the United States, first organized by Stephen F. Austin in 1823. The original ranger force consisted of ten men charged with protecting settlers from Indian attacks. Though the rangers of this era are today considered law enforcement officers, they rarely wore badges and were little more than volunteers; the Mexican military was officially in charge of law enforcement in the then-Mexican state of Coahuila y Tejas. The Rangers later served as a paramilitary force on the U.S.-Mexico border and in several armed military conflicts, including the Texas Revolution, the Mexican–American War, and the American Civil War. They continued to fill basic law enforcement and frontier protection roles until the close of the "wild west" era. In the early 1900s, they transformed into a criminal investigative agency. The history and legacy of the Texas Rangers has spawned numerous depictions in popular culture. The colloquial image of a Texas Ranger "always [getting] their man" has likewise made the Rangers a revered and highly competitive agency within law enforcement, with fewer than 1 in 100 applicants being considered for a single position.

The Pennsylvania state police force emerged in the aftermath of the anthracite mine strike of 1902, in Pennsylvania. The passage of legislation on May 2, 1905, did not provoke controversy because it was quietly rushed through the mine-owner dominated legislature, but the strike-breaking role of the new police elicited strong opposition from organized labor, who likened them to the repressive Russian cossacks under the tsar.[1] President Theodore Roosevelt, himself a former President of the New York City Police Commission, noted that the Pennsylvania State Police were intended to replace the "infamous" Coal and Iron Police, the private company police used to counter union attacks on private property:

When the laboring masses rocked in mortal combat with the vested interest, the State stepped in to prove her impartial justice by selling her authority into the vested interests' hands! ... whenever the miners elected to go out on strike ... they invariably found the power of the State bought, paid for, and fighting as a partisan on their employers' side. Nor was there any attempt made to do this monstrous thing under mask of decency."[2]

Roosevelt's assertions notwithstanding, the Iron and Coal Police continued to operate in increasing numbers into the 1930s.

The formation of the New York State Police force on April 11, 1917, was done amidst controversy and public debate, and the legislation creating it passed by only one vote.[3] Proponents of a proposal to establish the New York State Police depicted state police as the policemen-soldiers of an impartial state in labor disputes, and saw in them "no gendarmerie, no carabinieri," intimating that labor's opposition was "un-American".[4] Instead, they were to be more like the trooper police of Australia, both of which had a much more respectable reputation than the maligned forces evoked by trade unionists.[4] Outside of Pennsylvania, the new state police were also established to free up the National Guard from strikebreaking duties, which was extensive in the later 19th century and early decades of the 20th.

The strikebreaking demands on the New York state police decreased over time and their mandate modernized with the creation of the inter-state highway system and proliferation of the automobile. While the early "state troopers", as the name implies, were mounted troops, by mid-century they were fully motorized police forces.

The federal government in the 1920s was generally distrustful of southern states establishing state police, fearing the agencies would be used to oppress black citizens from voting and exercising their civil rights. Additionally, southern states were non-union and had little need for such state police, as did some northern mining states. During this time the Ku Klux Klan (KKK) was also on a resurgence. In response, the southern states established agencies to regulate the increasing problems related to motor vehicles and highway safety, such as licensure compliance, vehicle registration, speed enforcement, vehicular equipment safety, vehicle insurance laws and drunken driving. Over time, these agencies were vested with general police powers, but remained focused primarily on highway and vehicular law enforcement.

North Carolina for example established a DMV motor vehicle theft investigations unit in 1921 to combat a rising problem with car theft, but the state realized a need for a larger, uniformed highway patrol agency to solely enforce traffic laws statewide. Local NC sheriffs did not have the personnel, resources or training to do so during that era, but did not want their powers usurped by a per-se state police agency. Thus, the NC State Highway Patrol was established on July 1, 1929. Its original command staff was sent to the Pennsylvania State Police Academy for training. Upon completion, these lieutenants and a captain returned to NC and started the SHP with a training camp for new recruits at Camp Glenn, a WW1 abandoned army post in Morehead City. Chartered to enforce traffic laws only, in the early 1930s the NCSHP had added in its charter that it had powers to deal with among other crimes, bank robbery. This was done at the request of the federal government, so that local states could assist the FBI during the rash of bank robberies in the gangster era of the Great Depression in the 1930s. During this time, the FBI issued 100 spare Thompson .45 caliber sub-machineguns to the NCSHP, to prepare NC troopers to help the FBI combat the rash epidemic of bank robberies at the time. The expected scores of bank robberies never occurred in NC, instead being an epidemic confined to the sparsely-populated and vast areas of the Southwest, Midwest and Great Plains states from Texas to Minnesota. The guns were kept in the main SHP armory in Raleigh and never issued. The weapons were returned to the Federal government in the mid-1980s.

In many states, the state police are known by different names: the various terms used are "State Police," "Highway Patrol," "State Highway Patrol," "State Patrol," and "State Troopers." However, the jurisdictions and functions of these agencies are usually the same, regardless of title. Some agencies' names are actually misnomers with respect to the work regularly done by their members. All but two state police entities use the term "trooper" to refer to their commissioned members - California and New Mexico are the lone exceptions, using the term "officer" instead. (Until 2015, Arizona also used this term, but has since switched to "trooper.") These titles are usually historical and do not necessarily describe the agency's function or jurisdiction. Colloquial or slang terms for a state trooper may include "troop," "statey," stater," or, in trucker slang, "Smokey" or "full-grown bear". Some regional slang terms also exist for specific agencies.

The Texas State Police was formed during the administration of Texas Governor Edmund J. Davis on July 22, 1870, to combat crime associated with Reconstruction statewide in Texas. It worked primarily against racially based crimes, and included black police officers, which caused howls of protest from former slave owners (and future segregationists). It was dissolved by order of the legislature on April 22, 1873.[8] The Texas Highway Patrol currently performs statewide police functions. 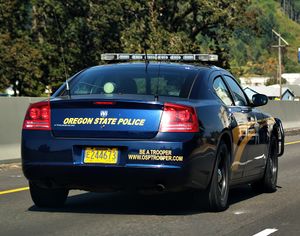 Though many forces use the term "state police," its meaning is not consistent from agency to agency. In many places, it is a full-service law enforcement agency which responds to calls for service, investigates criminal activity, and regularly patrols high-crime areas. On the other hand, some state police agencies, despite the name, are strictly tasked with traffic enforcement, though their members usually retain full police powers; the Arkansas State Police is an example. 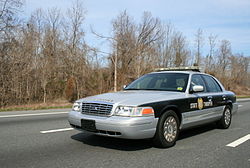 North Carolina State Trooper on I-85

Several agencies use the term "highway patrol," though this name can be misleading in some cases. Some highway patrol agencies are, as their name implies, dedicated to enforcing state traffic laws on the highways; a few are full-service state police agencies which regularly respond to calls and conduct inner-city policing functions; and yet others are a bridge, focusing primarily on traffic enforcement but providing general policing services when and where necessary.

Their primary concern is enforcing motor vehicle laws, but they also assist with other incidents. These include riots, prison disturbances, labor related disturbances, and providing security at sporting events.

Unlike the other 49 states, Hawaii is not a continuous piece of land, but rather an archipelago, consisting primarily of eight major islands. Because of its geography, it is impossible to use roads to get from one local/municipal jurisdiction to another. As a consequence, Hawaii is the only state that does not have a specifically named state police / highway patrol force. Highway patrol functions are instead carried out within each of the state's five counties, each of which has its own police force. The Sheriff Division of the Hawaii Department of Public Safety performs the security policing tasks usually undertaken by a dedicated state police force, in addition to providing bailiffs and corrections officers to the judicial apparatus.

The television series Hawaii Five-O featured a fictional state police detective unit in Hawaii. This was not a uniformed police force, but instead functioned more as a State Bureau of Investigation.

Today, FDLE is headed by a Commissioner who is appointed by the Governor and approved by the Cabinet. Headquartered in Tallahassee, FDLE employs nearly 2,000 members statewide who work at the department’s seven Regional Operations Centers, 15 field offices and seven crime laboratories. The members of FDLE are guided by four fundamental values as they respond to the needs of Florida’s citizens and criminal justice community: service, integrity, respect, and quality. FDLE is structured to deliver services in five program areas:Executive Direction and Business, Support Program, Criminal Investigations and Forensic Science Program, Florida Capitol Police Program, Criminal Justice Information Program, Criminal Justice Professionalism Program.