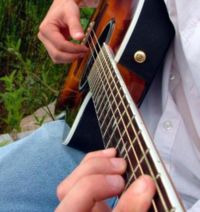 Playing a steel-string guitar without a pick (fingerpicking). 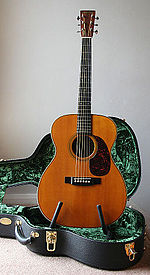 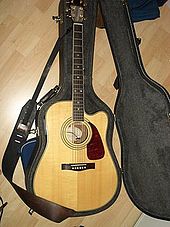 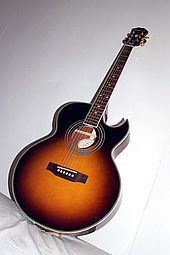 The most common type is often called a flat-top guitar, to distinguish it from the more specialized archtop guitar and other variations.

There are many variations in construction and materials used in steel-string guitars. Different combinations of woods and construction elements (for example, how the top is braced) affect the timbre or "tone" of the guitar. Many players and luthiers feel a well-made guitar's tone improves over time. This is believed to be due to the decrease in the content of hemicellulose, crystallization of cellulose and changes to lignin over time resulting in the wood gaining better resonating properties.

Acoustic guitars are commonly constructed in several different body types. In general, the guitar's soundbox can be thought of as composed of two connected chambers: the upper bouts and lower bouts (a bout being the rounded corner of an instrument body), which meet at the waist, or the narrowest part of the body face near the soundhole. The proportion and overall size of these two parts helps determine the overall tonal balance and "native sound" of a particular body style – the larger the body, the louder the volume.

Any of these body type can optionally incorporate a "cutaway". A cutaway guitar has a redesigned upper bout that removes a section of the soundbox on the underside of the neck, hence the name "cutaway". This allows for easier access to the frets that are located on top of the soundbox past the heel of the neck. The tradeoff is reduced soundbox volume, and often a change in bracing, which can change the resonant qualities and hence the tone of the instrument.

All of the guitars above are relatively traditional in looks and construction, and are commonly referred to as "flattop" guitars. All are commonly seen and heard in popular music genres, including rock, blues, country, and folk. However, other styles of guitar have been introduced and enjoy moderate popularity, generally in more specific genres:

Traditionally, steel-string guitars have been made of a combination of various "tonewoods", or woods that have pleasing resonant qualities when used in instrument-making. Foremost are Sitka spruce, the most common, and Alpine and Adirondack spruce, the most sought-after, woods for the making of guitar tops. The back and sides of a particular guitar are typically made of the same wood; Brazilian or East Indian rosewood and Honduras mahogany are traditional choices, however, maple has been prized for the figuring that can be seen when it is cut in a certain way (such as "flame" and "quilt" patterns). A common non-traditional wood gaining popularity is sapele, which is tonally similar to mahogany but slightly lighter in color and possessing a deep grain structure that is visually appealing.

Due to decreasing availability and rising prices of premium-quality traditional tonewoods, many manufacturers have begun experimenting with alternative species of woods or more commonly available variations on the standard species. For example, some makers have begun producing models with redcedar or mahogany tops, or with spruce variants other than Sitka. Cedar is also common in the back and sides, as is basswood. Entry-level models, especially those made in East Asia, often use nato wood, which is again tonally similar to mahogany but is cheap to acquire. Some have also begun using non-wood materials, such as plastic or graphite. Carbon-fiber and phenolic composite materials have become desirable for building necks, and some high-end luthiers produce all-carbon-fiber guitars.

The steel-string acoustic guitar evolved from the nylon- or gut-string classical guitar, and because steel strings have higher tension, heavier construction is required overall. One innovation is a metal bar called a truss rod, which is incorporated into the neck to strengthen it and provide adjustable counter-tension to the stress of the strings. Typically, a steel-string acoustic guitar is built with a larger soundbox than a standard classical guitar. A critical structural and tonal component of an acoustic guitar is the bracing, a systems of struts glued to the inside of the back and top. Steel-string guitars use different bracing systems from classical guitars, typically using X-bracing instead of fan bracing. (Another simpler system, called ladder bracing, where the braces are all placed across the width of the instrument, is used on all types of flat-top guitars on the back.) Innovations in bracing design have emerged, notably the A-brace developed by British luthier Roger Bucknall of Fylde Guitars.

Most luthiers and experienced players agree that a good solid top (as opposed to laminated or plywood) is the most important factor in the tone of the guitar. Solid backs and sides can also contribute to a pleasant sound, although laminated sides and backs are acceptable alternatives, commonly found in mid-level guitars (in the range of US$300–$1000).

From the 1960s through the 1980s, "by far the most significant developments in the design and construction of acoustic guitars" were made by the Ovation Guitar Company.[2] It introduced a composite "roundback" bowl, which replaced the square back and sides of traditional guitars; because of its engineering design, Ovation guitars could be amplified without producing the obnoxious feedback that had plagued acoustic guitars before. Ovation also pioneered with electronics, such as pickup systems and electronic tuners.[2][3]

See Guitar for more details on the construction of acoustic guitars.

A steel-string guitar can be amplified with a:

The last type of guitar is commonly called an "acoustic-electric" or "electro-acoustic" guitar, as it can be played either "unplugged" as an acoustic or plugged in as an electric. The most common type is a piezoelectric pickup, which is composed of a thin sandwich of quartz crystal. When compressed, the crystal produces a small electric current, so when placed under the bridge saddle, the vibrations of the strings through the saddle, and of the body of the instrument, are converted to a weak electrical signal. This signal is often sent to a pre-amplifier, which increases the signal strength and normally incorporates an equalizer. The output of the preamplifier then goes to a separate amplifier system similar to that for an electric guitar.

Several manufacturers produce specialised acoustic guitar amplifiers, which are designed to give undistorted and full-range reproduction.

Steel-string guitars are also important in the world of flatpicking, as utilized by such artists as Clarence White, Tony Rice, Bryan Sutton, Doc Watson and David Grier. Luthiers have been experimenting with redesigning the acoustic guitar for these players. These flat-top, steel-string guitars are constructed and voiced more for classical-like fingerpicking and less for chordal accompaniment (strumming). Some luthiers have increasingly focused their attention on the needs of fingerstylists and have developed unique guitars for this style of playing.

Many other luthiers attempt to recreate the guitars of the "Golden Era" of C.F. Martin & Co. This was started by Roy Noble, who built the guitar played by Clarence White from 1968 to 1972, and was followed by Bill Collings, Marty Lanham, Dana Bourgeois, Randy Lucas, Lynn Dudenbostel and Wayne Henderson, a few of the luthiers building guitars today inspired by vintage Martins, the pre–World War II models in particular. As prices for vintage Martins continue to rise exponentially, upscale guitar enthusiasts have demanded faithful recreations and luthiers are working to fill that demand.