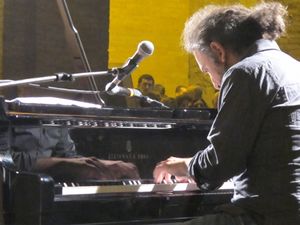 He made his professional debut at fifteen and received his diploma in piano from the Conservatorio Luigi Cherubini in Florence. He performs classical music, smooth jazz, avant-garde jazz, Brazilian jazz, and pop rock. In 1998, Musica Jazz magazine voted him Best Jazz Talent of the Year and later he would be awarded for jazz by a New Swing group in Japan. While he is mostly known for his collaborations with Enrico Rava, he has made several albums as a leader, and has been favourably acknowledged by several long established jazz musicians, such as Martial Solal. The album Mi ritorni in mente, includes an interpretation of the standard "Nature Boy" which has been acclaimed by many.