From Infogalactic: the planetary knowledge core
Jump to: navigation, search
For other uses, see Steinberger (disambiguation).

Steinberger is a series of distinctive electric guitars and bass guitars, designed and originally manufactured by Ned Steinberger. The name "Steinberger" can be used to refer to either the instruments themselves or the company that originally produced them. Although the name has been applied to a variety of instruments, it is primarily associated with a minimalist "headless" design of electric basses and guitars. 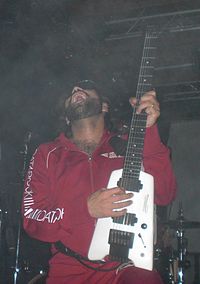 The best-known Steinberger design is the L-series instrument, sometimes described as shaped like a broom, boat oar, or cricket bat. Initially produced as an electric bass and later as a guitar, the instrument was made entirely of the Steinberger Blend, a "proprietary" graphite and carbon fiber mix in two pieces: the main body and a faceplate (the "blend" being an off-the-shelf carbon fiber "system" from the DuPont product line). The headstock was eliminated, the tuning hardware instead installed on a tailpiece mounted to the face of the guitar body. The tuners utilized a finer than normal 18:1 gear ratio, with 40 threads per inch, which gave slower but more precise adjustment and helped reduce string slippage. Depending on the tailpiece, calibrated or uncalibrated double-ball end strings were used, the former required to use the transposing feature of the TransTrem vibrato unit. The rationale for the overall design was the elimination of unnecessary weight, especially the unbalanced headstock, and the use of modern materials, such as graphite, for their advantages over wood.

The all-synthetic construction gave a very smooth sound and feel, immediate note attack, and very even tonal response. Depending upon the preferences of the listener, this was either a good thing, as it made the instrument sonically clean, or a bad thing, as it made the instrument sound synthetic and unnatural. Steinberger was and still is proud of this dichotomy and one of their slogans was "We don't make 'em like they used to."

Another innovation created by Ned Steinberger for some of these instruments was the TransTrem, a patented (now long lapsed) transposing vibrato assembly that proportionally adjusted the string tensions to enable immediate accurate retuning of the instrument with the transposing vibrato lever. The TransTrem provided the functionality of a capo in addition to vibrato effects. Bass and guitar versions were available.

Several companies licensed the headless technology from Steinberger and produced numerous inferior all-wood clones or similar instruments. Hohner, for example, produced licensed all-wood L-series copies and Cort produced headless guitars with different body designs. Current official all-wood instruments are sold under the Spirit by Steinberger brand. The Spirit comes in two versions, the Deluxe and Standard. The Deluxe features bridge and neck humbucker pickups with a single coil in the middle position and the Standard features a bridge humbucker and two single coils at the middle and neck position. This is the only difference between the two models.

The first Steinberger basses, as opposed to the NS instruments built with luthier Stuart Spector, were produced in 1979 in Brooklyn, New York by Ned Steinberger, essentially alone. A company, Steinberger Sound, was duly set up to manufacture the basses and later the guitars on a larger scale at Newburgh, New York; however demand always outstripped supply and the poorly managed company was eventually sold to Gibson in 1987 who immediately closed the Newburgh plant and began making far inferior versions in-house. Ironically, Gibson still retains rights over the "Steinberger" name, precluding Ned Steinberger from calling his new instruments "Steinbergers". This is analogous to the situation Leo Fender found himself in after the sale of his company to CBS in 1965. Ned Steinberger has operated a company called "NS Design" since 1990 and produces expensively-priced electric violin family instruments: double basses, cellos, viola, violin. All of these instruments have a number of interesting innovations in materials and design. An NS Bass Guitar (headless) was added later to the production line.

With changing musical fashions and the complex manufacturing and inordinately high prices putting off buyers and producer alike, Gibson stopped selling Steinberger guitars in the mid-1990s. Enthusiasm for the instruments has now revived to a sufficient extent that they are again being produced and sold, although the newer versions share few commonalities with the original "Newburgh" designs, and are widely regarded as substandard and vastly inferior to the original product. The latest Gibson/Steinberger line, known collectively as the Synapse line, are produced in South Korea. This comprises two guitar models and one bass guitar model. The new instruments are part wood and part graphite composite, and are not interchangeable with the original Steinberger guitars. The two guitar models most resemble the original Steinbergers with rectangular bodies only slightly larger than the originals. One of the guitar models, the Trans Scale model, features a longer than average scale length and a built-in adjustable capo. By moving the capo closer to the end of the neck, one can play notes lower than standard guitar tuning without having to detune. Detuning loosens the strings, changing the timbre of the notes played. By not forcing guitarists to detune to get lower notes, the Trans Scale allows guitarists to maintain consistent tone while playing lower-than-standard notes.

The Hohner Jack Bass was a licensed imitation, and used the same patented locking and tuning system as the L series, although without the graphite neck. As such, it required double-ball end strings in the same way as the Steinberger originals. Hohner continues to offer the G3T Steinberger licensed guitars, which have been available since "the late 1980s". The G3T is a wooden rendering of the Steinberger composite guitar in appearance, with maple neck and rosewood fingerboard, and licensed tremolo bridge.

A wooden licensed solid bass was produced by Cort Guitars in the mid 1980s. This instrument is more than a copy and is now sought after again[citation needed].

In the early 1980s, Kramer Guitars also manufactured a headless bass called the Duke series. Although the overall form was similar to Steinberger's, the Duke series had an aluminum/wood neck and wood body. Standard geared tuning pegs were located at the bridge-end of the instrument.