A step pyramid or stepped pyramid is an architectural structure that uses flat platforms, or steps, receding from the ground up, to achieve a completed shape similar to a geometric pyramid. Step pyramids are structures which characterized several cultures throughout history, in several locations throughout the world. These pyramids typically are large and made of several layers of stone. The term refers to pyramids of similar design that emerged separately from one another, as there are no firmly established connections between the different civilizations that built them. 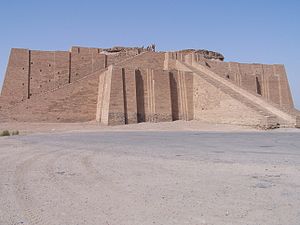 The 4100-year-old Great Ziggurat of Ur in southern Iraq

Ziggurats were huge religious monuments built in the ancient Mesopotamian valley and western Iranian plateau, having the form of a terraced step pyramid of successively receding stories or levels. There are 32 ziggurats known at, and near, Mesopotamia. Twenty-eight of them are in Iraq, and four of them are in Iran. Notable Ziggurats include the Great Ziggurat of Ur near Nasiriyah, Iraq, the Ziggurat of Aqar Quf near Baghdad, Iraq, Chogha Zanbil in Khūzestān, Iran, the most recent to be discovered – Sialk near Kashan, Iran and others. Ziggurats were built by the Sumerians, Babylonians, Elamites and Assyrians as monuments to local religions. The probable predecessors of the ziggurat were temples supported on raised platforms or terraces that date from the Ubaid period[1] during the fourth millennium BC, and the latest date from the 6th century BC. The earliest ziggurats probably date from the latter part of the Early Dynastic Period of Sumer.[2] Built in receding tiers upon a rectangular, oval, or square platform, the ziggurat was a pyramidal structure. Sun-baked bricks made up the core of the ziggurat with facings of fired bricks on the outside. The facings were often glazed in different colors and may have had astrological significance. Kings sometimes had their names engraved on these glazed bricks. The number of tiers ranged from two to seven, with a shrine or temple at the summit. Access to the shrine was provided by a series of ramps on one side of the ziggurat or by a spiral ramp from base to summit. It was also called Hill of Heaven or Mountain of the gods. 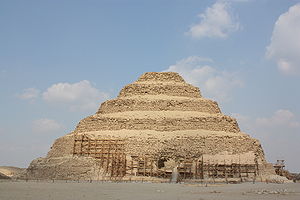 The earliest Egyptian pyramids were step pyramids. During the Third Dynasty of Egypt, the architect Imhotep designed Egypt's first step pyramid as a tomb for the pharaoh, Djoser. This structure, the Pyramid of Djoser, was composed of a series of six successively smaller mastabas (an earlier form of tomb), one on top of another. Later pharaohs, including Sekhemkhet and Khaba, built similar structures, known as the Buried Pyramid and the Layer Pyramid, respectively.

In the Fourth Dynasty of Egypt, the Egyptians began to build "true pyramids" with smooth sides. The earliest of these pyramids, located at Meidum, began as a step pyramid built for Sneferu. Sneferu later made other pyramids, the Bent Pyramid and Red Pyramid at Dahshur, which were the first true pyramids to be built as such from the beginning. With this innovation, the age of Egyptian stepped pyramids came to an end.

One of the unique structures of Igboland was the Nsude Pyramids, at the Nigerian town of Nsude, northern Igboland. Ten pyramidal structures were built of clay/mud. The first base section was 60 ft. in circumference and 3 ft. in height. The next stack was 45 ft. in circumference. Circular stacks continued, till it reached the top. The structures were temples for the god Ala/Uto, who was believed to reside at the top. A stick was placed at the top to represent the god's residence. The structures were laid in groups of five parallel to each other. Because it was built of clay/mud like the Deffufa of Nubia, time has taken its toll requiring periodic reconstruction.[3] 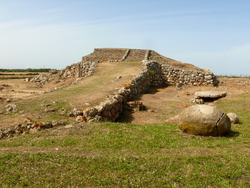 A step pyramid exists in the archaeological site of Monte d'Accoddi, in Sardinia, dating to the 4th millennium BC.: "a trapezoidal platform on an artificial mound, reached by a sloped causeway. At one time a rectangular structure sat atop the platform ... the platform dates from the Copper Age (c. 2700–2000 BC), with some minor subsequent activity in the Early Bronze Age (c. 2000–1600 BC). Near the mound are several standing stones, and a large limestone slab, now at the foot of the mound, may have served as an altar."[4] 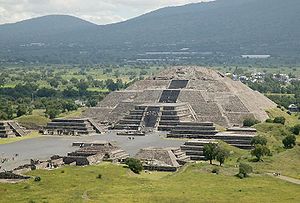 Pyramid of the Moon, Teotihuacan, Mexico

The most prolific builders of these step pyramids were the pre-Columbian civilizations. The remains of step pyramids can be found throughout the Mayan cities of the Yucatán, as well as in Aztec and Toltec architecture. In many of these cases, successive layers of pyramids were built on top of the pre-existing structures, with which the pyramids expanded in size on a cyclical basis. This is true of the Great Pyramid of Cholula and of the Great Pyramid of Tenochtitlan.

Step pyramids were also a part of South American architecture, such as that of the Moche and the Chavín culture. 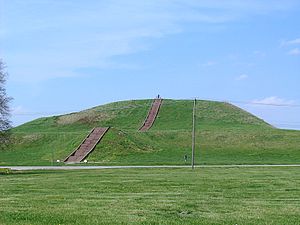 Monk's Mound in summer. The concrete staircase follows the approximate course of the ancient wooden stairs.

There are a number of earthwork step pyramids within North America. Often associated with mounds and other mortuary complexes across the Eastern Woodlands (concentrated in the North American Southeast), step pyramids were constructed as ceremonial centres by the Mississippian cultures (900-1500CE), and are regarded as a facet of the Southeastern Ceremonial Complex.

The largest earthen work step pyramid of this type in North America is Monk's Mound, located in present-day Cahokia, Illinois. With the base of the structure exceeding 16 acres[5] Monks Mound is also one of the largest pyramids by area in the world (after La Danta and Great Pyramid of Cholula). 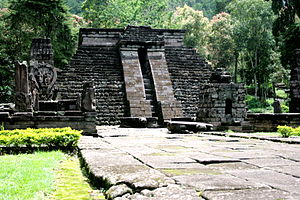 The main pyramid of Sukuh temple

As well as menhirs, stone tables, and stone statues Austronesian megalithic culture in Indonesia also featured earth and stone step pyramid structure, referred to as Punden Berundak. These structures have been found in Pangguyangan, Cisolok and Gunung Padang, West Java, the latter of which is the biggest Megalithic Site in Southeast Asia.[6] The construction of stone pyramids was based on the native belief that mountains and other high places are the abode of the spirit of the ancestors, or hyangs.

The step pyramid is the basic design of the 8th or 9th century Borobudur Buddhist monument in Central Java. However the later temples built in Java were influenced by Indian Hindu architecture, as displayed by the towering spires of Prambanan temple. In the 15th century, Java, during the late Majapahit period, saw the revival of Austronesian indigenous elements as displayed by Sukuh temple that somewhat resembles a Mesoamerican pyramid.