Stephen Baxter (born 13 November 1957) is a prolific British hard science fiction author. He has degrees in mathematics and engineering.

Strongly influenced by SF pioneer H. G. Wells, Baxter has been a distinguished Vice-President of the international H. G. Wells Society since 2006. His fiction falls into three main categories of original work plus a fourth category of working extending other authors' writing; each has a different basis, style and tone.

Baxter's "Future History"[1] mode is based on research into hard science. It encompasses the monumental Xeelee Sequence, which as of September 2015 is composed of seven novels (including the Destiny's Children series), plus five novellas and 47 short pieces, all of which fit into a single timeline stretching from the Big Bang singularity of the past to his Timelike Infinity singularity of the future.[2] These stories begin in the present day and end when the Milky Way galaxy collides with Andromeda five billion years in the future.[2] The central narrative is that of Humanity rising and evolving to become the second most powerful race in the universe, next to the god-like Xeelee. Character development tends to take second place to the depiction of advanced theories and ideas, such as the true nature of the Great Attractor, naked singularities and the great battle between Baryonic and Dark Matter lifeforms. The Manifold Trilogy is another example of Baxter's future history mode, even more conceptual than the Xeelee sequence – each novel is focused on a potential explanation of the Fermi Paradox. The two-part disaster series Flood and Ark (followed by three additional stories, "Earth III," "Earth II," and "Earth I") which also fits into this category, where catastrophic events unfold in the near future and Humanity must adapt to survive in three radically different planetary environments. In 2013, Baxter will release his short story collection entitled Universes which will feature stories set in Flood/Ark, Jones & Bennet and Anti-Ice universes.[3] Baxter has signed a contract for two new books due in 2013 and 2014, titled Proxima and Ultima, both of which are names of planets.[4] 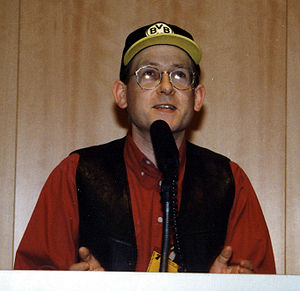 Stephen Baxter at the Science-Fiction-Tage NRW in Dortmund, Germany, March 1997

A second category in Baxter's work is based on readings in evolutionary biology and human/animal behaviour. Elements of this appear in his future histories (especially later works like the Destiny's Children series and Flood/Ark), but here it is the focus. The major work in this category is Evolution, which imagines the evolution of humanity in the Earth's past and future. The Mammoth Trilogy, written for young adults, shares similar themes and concerns as it explores the present, past, and future of a small herd of mammoths found surviving on an island in the Arctic Ocean.

A third category of Baxter's fiction is alternate history, based on research into history. These stories are more human, with characters portrayed with greater depth and care. This includes his NASA Trilogy, which incorporates a great deal of research into NASA and its history, and the Time's Tapestry series, which features science-fictional interventions into our past from an alternate-history future. The novel Anti-Ice is an earlier example of Baxter's blending of alternate history with science fiction. His most recent work in this direction is the Northland Trilogy, an alternate prehistory that begins with Stone Spring, set ten thousand years ago in the Stone Age, followed by Bronze Summer and Iron Winter, set in alternate versions of the Bronze Age and the Iron Age. In 2009, Baxter became a judge for the Sidewise Award for Alternate History, the first former winner among the panel.[5]

Another category, outside of the main body of Baxter's independent work, is sequels and installments of science-fiction classics. His first novel to achieve wide recognition (winning three literary awards) was The Time Ships, an authorised sequel to H.G. Wells' The Time Machine. The Time Odyssey series, a trilogy co-authored with Arthur C. Clarke, is connected to Clarke's four Space Odyssey novels. Another novel is based on a synopsis written by Clarke, The Light of Other Days. Baxter has also published a Doctor Who novel, The Wheel of Ice.

In 2010, Baxter began working on a new series with Terry Pratchett.[6] This collaboration has produced four books, The Long Earth, The Long War, The Long Mars, and The Long Utopia.

Baxter has also written non-fiction essays and columns for such publications as Critical Wave and the British SF Association's Matrix.

Baxter was born 13 November 1957 in Liverpool, England and studied mathematics at Cambridge University, obtained a doctorate in engineering at Southampton University, and received an MBA from Henley Management College. Baxter taught maths, physics, and information technology before becoming a full-time author in 1995. He is also a chartered engineer and fellow of the British Interplanetary Society.[10]