Stephen "Stef" Carpenter (born August 3, 1970) is an American musician, known as the co-founder and lead guitarist of the rock band Deftones.

His guitar technique makes use of both ringing open strings and dissonant chord voicings, as well as stock power chords in poly-rhythms. Carpenter began his musical career with Deftones playing the traditional 6 string guitar. After becoming influenced by such bands as Fear Factory and Meshuggah, he began playing a seven-string guitar in the late 90's. After Deftones' third album White Pony, subsequent releases would be written with seven strings; up until 2010's Diamond Eyes and 2012's Koi No Yokan, which were written with an eight-string guitar. He was ranked 60th in Guitar World's The 100 Greatest Metal Guitarists poll.

Stephen Carpenter was born on August 3, 1970 in Sacramento, California, to an American father and a Mexican mother.[2] He has a sister named Marci. He grew up in the Sacramento area and pursued many hobbies, including skateboarding.

When Carpenter was 15 years old, he was hit by a car while skateboarding. He used a wheelchair for several months. It was at this point that he began teaching himself guitar by playing along with bands such as Anthrax, Stormtroopers of Death and Metallica.[3] It has been reported that the driver paid Carpenter a cash settlement that allowed the band to purchase equipment,[3][4][5] but drummer Abe Cunningham commented in an interview that this was "a myth about how our band was started."[6]

Carpenter attended McClatchy High School with future band mates Chino Moreno and Abe Cunningham. They were childhood friends and remained friends through the skateboarding scene in Sacramento.[3] When Moreno found out Carpenter played guitar, he set up a jam session with Cunningham and the three began playing regularly in Carpenter's garage circa 1989. After playing with several bassists, the band settled on Chi Cheng and within two years the band began playing club shows and later expanded their playing territory to San Francisco and Los Angeles where they played shows alongside bands such as Korn.[5][7]

His relationship with Deftones lead singer and band mate Chino Moreno has been recorded as being fraught at times. Apparently, recording of Saturday Night Wrist was protracted due to their "warfare".[8] With regards to musical tastes, Saturday Night Wrist being described as "more aggressive" equated to it being "more aggressive for him [Chino]"; Carpenter said he'd "definitely be glad to take it to the next level, but that's asking too much right now." He is Testament singer, Chuck Billy's, first cousin[9]

Carpenter has stated that he mostly listens to hip hop, but outside of hip hop, Meshuggah, Fear Factory, Metallica, Slayer, Anthrax, and Faith No More are some of his influences.[10] He has also stated that his favorite album of all time is Chaosphere by Meshuggah, saying: "The most brutal record I've heard, from second one to second last. It left me wondering where the hell I'd been the whole time."[10] While recording Deftones' Diamond Eyes, he claimed that the only artist he listened to was American rapper Tech N9ne.[11]

Carpenter is a member of the electronic music project Sol Invicto, led by producer Richie (Aka Richie Londres) with Tech Itch.[12] The band released its debut EP, Initium in 2011 for free. The band's second EP, Initium II was released in 2013 via the band's official SoundCloud page, the group are currently releasing Initium III track by track until the planned vinyl release in early 2015.[13][14][15]

Carpenter was involved the rap metal band Kush, featuring Christian Olde Wolbers and Raymond Herrera of Fear Factory and B-Real of Cypress Hill. The band's debut album, which was set to be released in 2003,[16][17] was never released.

Stephen also plays drums. In an interview with Guitar.com he reported that he likes drums more than he likes guitars, "as far as when it comes to creating the ideas."[1] Also on his drumming abilities, he said:

"I do play drums. But I play drums like a guitar player, if that makes any sense. I don't play drums like a drummer would, where a drummer has the ability to somehow manipulate that kit into different dimensions. I can't do that. I play to the riffs and I'm pretty straight forward. I could pull off playing drums in a little jam session, but when it comes to really writing songs as a drummer, I don't have it. To me, a tempo could be the same beat in every song, when it comes down to it. Really, you're just changing the tempos to back the riff."[1] 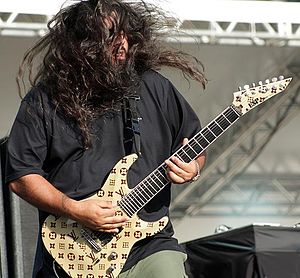 Carpenter performing with Deftones in November 2009.

Carpenter currently endorses ESP Guitars, Marshall Amplifiers, Engl Amplifiers, GuitarRig and Fishman Fluence Signature pickups. He has been a major endorser of ESP since the mid-1990s with a number of signature six (now discontinued), seven, eight string and baritone models in production.