Drew went to Lowndes High School in Valdosta, Georgia. Following in the footsteps of his brother, J. D., he enrolled at Florida State University and played college baseball for the Florida State Seminoles baseball team.

The Arizona Diamondbacks selected Drew in the first round, with the 15th overall selection, of the 2004 Major League Baseball Draft. He began the 2006 season with the Lancaster JetHawks of the Class A-Advanced California League, where he batted .389 and hit 10 home runs. He was later promoted to the Tennessee Smokies of the Class AA Southern League, with whom he hit .218 and hit 4 home runs. He was then promoted to the Tucson Sidewinders of the Class AAA Pacific Coast League.

He was selected to the 2006 All-Star Futures Game.

In 2007, although the Diamondbacks were division champions, Drew had a disappointing season, hitting only .238 with 12 home runs but a career-high 9 stolen bases. 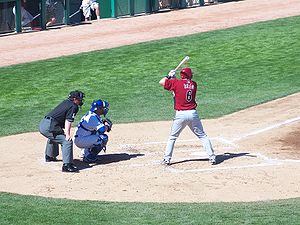 Drew batting with the Arizona Diamondbacks in 2008 spring training

On September 1, 2008, he hit for the cycle against the St. Louis Cardinals, becoming the first player to do so at Chase Field.[1] Batting leadoff, Drew singled in the first inning, tripled in the third and homered in the fifth against Cardinal starter Joel Piñeiro. He added a ground-rule double in the seventh against reliever Kyle McClellan. He was the fourth to hit for the cycle in 2008, and on the same day Adrián Beltré of the Seattle Mariners became the fifth. This was the first time that two players had hit for the cycle on the same day since 1920.[2] He finished the season batting .291, with a career-high 21 home runs.

In 2009, he hit .261 with 12 home runs and a career-high 12 triples, tied with Michael Bourn for the second most in the National League that year.

On Opening Day, April 5, 2010, he hit an inside-the-park home run against starter Jon Garland, the sixth Diamondback to do so. He finished that year batting .278, with 15 home runs and 61 RBI.

In 2011, Drew missed the first four games of the season due to abdominal pain. On July 20, 2011, he slid into home plate, fractured his right ankle and missed the rest of the season, batting .252 for the year with 5 home runs and 45 RBI. He played in only 86 games that season, fewer than in any season after the 59 games of his rookie year.

He spent early 2012 on the disabled list for the broken ankle until June 27, when he played for the first time in over 11 months, going one for four. He was linked to various teams at the 2012 trade deadline, including the Detroit Tigers and Oakland Athletics.[3] On July 30, manager Kirk Gibson called Drew into his office for a closed-door meeting; speculation that Drew had been traded ensued.[4] In the 40 games he played with the Diamondbacks that season, Drew batted with just a .193 batting average, 2 home runs, and 12 RBI.

Over the course of nearly 7 seasons with the Diamondbacks, Drew would compile a team record 52 triples.

On December 17, 2012, Drew signed a one-year, $9.5 million contract with the Boston Red Sox, which also included $500,000 in performance bonuses.[6] Drew had a .253 batting average, 13 home runs, and 67 RBI in the 2013 regular season. After struggling at the plate for most of the 2013 postseason, Drew homered in the decisive Game 6 of the World Series, helping the Red Sox clinch their third championship in nine years and earning his first career World Series ring.

Drew opted to become a free agent after the 2013 season, and turned down Boston's qualifying offer of $14.1 million for the 2014 season. Turning down Boston's offer meant that Boston would receive the top unprotected draft pick of any team that signed Drew. By the start of the 2014 season Drew remained unsigned, and baseball analysts attributed it partly to few teams needing a veteran starting shortstop and partly to teams not being willing to give up a top draft pick. On May 20, 2014, Drew signed a one-year, $10 million contract with Boston, a prorated amount of the $14.1 million qualifying offer he previously rejected.[7] In 39 games he played in for the Red Sox that year, Drew hit 4 home runs, 11 RBI, and had a low batting average of just .176.

Drew is a Christian.[12] Drew's father found his first baseball glove in a dumpster.[13] The Drew brothers are the only trio of siblings all selected in the first round of the Major League Baseball Draft.[14]