Sir Stephen Harold Spender CBE (28 February 1909 – 16 July 1995) was an English poet, novelist and essayist who concentrated on themes of social injustice and the class struggle in his work. He was appointed the seventeenth Poet Laureate Consultant in Poetry to the United States Library of Congress in 1965.[1]

Spender was born in Kensington, London, to journalist Harold Spender and Violet Hilda Schuster, a painter and poet.[2][3] He went first to Hall School in Hampstead and then at thirteen to Gresham's School, Holt and later Charlecote School in Worthing, but was unhappy there. On the death of his mother he was transferred to University College School (Hampstead), which he later described as "that gentlest of schools."[4] Spender left for Nantes and Lausanne and subsequently went up to University College, Oxford where, in 1973, he was made an honorary fellow. Spender said at various times throughout his life that he never passed an exam, ever. Perhaps his closest friend and the man who had the biggest influence on him was W. H. Auden, who introduced him to Christopher Isherwood. The earliest version of Poems written by Auden was hand-printed by Spender. He left Oxford without taking a degree and in 1929 he moved to Hamburg. Isherwood invited him to come to Berlin. Every six months Spender went back to England. 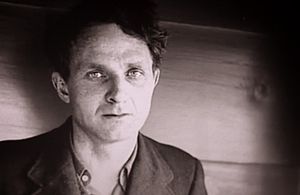 Spender began work on a novel in 1929, which was not published until 1988, under the title The Temple. The novel is about a young man who travels to Germany and finds a culture at once more open than England's—particularly about relationships between men—and showing frightening anticipations of Nazism, which are confusingly related to the very openness the main character admires. Spender says in his 1988 introduction:

In the late Twenties young English writers were more concerned with censorship than with politics... 1929 was the last year of that strange Indian Summer—the Weimar Republic. For many of my friends and for myself, Germany seemed a paradise where there was no censorship and young Germans enjoyed extraordinary freedom in their lives...[5]

His early poetry, notably Poems (1933) was often inspired by social protest. Living in Vienna his convictions found further expression in Forward from Liberalism and in Vienna (1934), a long poem in praise of the 1934 uprising of Austrian socialists, and in Trial of a Judge[6] (1938), an anti-Fascist drama in verse.

In 1936 he became a member of the Communist Party of Great Britain. Harry Pollitt, head of the CPGB invited him to write for the Daily Worker on the Moscow Trials. In 1937, during the Spanish civil war, they sent him to Spain. His mission was to observe and report on the Soviet ship Komsomol, which had sunk while carrying Soviet weapons to the Second Spanish Republic. Spender traveled to Tangier and tried to enter the country via Cadiz, but he was sent back. Then he traveled to Valencia and met with Ernest Hemingway and Manuel Altolaguirre. (Tony Hyndman, alias Jimmy Younger had joined the International Brigade who were fighting against Francisco Franco's forces in the Battle of Guadalajara.) Spender was imprisoned for a while in Albacete. In Madrid he met with André Malraux; they discussed André Gide's Retour de l'U.S.S.R. Because of an medical problems he went back to England and bought a house in Lavenham. In 1939 he divorced.

His 1938 translations of works by Bertolt Brecht and Miguel Hernández appeared in John Lehmann's New Writing.[7]

He felt close to the Jewish people; his mother, Violet Hilda Schuster, was half Jewish (her father's family were German Jews who converted to Christianity, while her mother came from an upper-class family of Catholic German, Lutheran Danish and distantly Italian descent). Spender's second wife, Natasha, whom he married in 1941, was also Jewish. In 1942 he joined as a volunteer the fire brigade of Cricklewood and Maresfield Gardens. Spender met several times with the poet Edwin Muir.

A member of the political left wing during this early period, he was one of those who wrote of their disillusionment with communism in the essay collection The God that Failed (1949), along with Arthur Koestler and others.[8] It is thought that one of the big areas of disappointment was the Molotov-Ribbentrop Pact between Nazi Germany and Stalinist Russia, which many leftists saw as a betrayal. Like fellow poets W. H. Auden, Christopher Isherwood, and several other outspoken opponents of fascism in the 1930s, Spender did not see active military service in World War II. He was initially graded "C" upon examination due to his earlier colitis, poor eyesight, varicose veins, and the long-term effects of a tapeworm in 1934. However, he contrived by pulling strings to be re-examined and was upgraded to "B" which meant that he could serve in the London Auxiliary Fire Service. Spender spent the winter of 1940 teaching at Blundell's School, having taken the position left vacant by Manning Clark, who returned to Australia as a consequence of the war to teach at Geelong Grammar.[9]

After the war he was member of the Allied Control Commission, restoring civil authority in Germany.[10]

With Cyril Connolly and Peter Watson Spender co-founded Horizon magazine and served as its editor from 1939 to 1941. From 1947 till 1949 he went several times to the USA and saw his friends Auden and Isherwood. He was editor of Encounter magazine from 1953 to 1966, but resigned after it emerged that the Congress for Cultural Freedom, which published the magazine, was being covertly funded by the CIA.[11] Spender always insisted that he was unaware of the ultimate source of Encounter's funds. Spender taught at various American institutions, accepting the Elliston Chair of Poetry[12] at the University of Cincinnati in 1954. In 1961 he became professor of rhetoric at Gresham College, London.

He helped found the magazine Index on Censorship, he was involved in the founding of the Poetry Book Society, and he did work for UNESCO.[13]

Spender was Professor of English at University College, London, 1970–77, and then became Professor Emeritus.

At a ceremony commemorating the 40th Anniversary of the Normandy Invasion, D-day on 6 June 1984, President Ronald Reagan quoted from Spender's poem "The Truly Great" in his remarks:

Gentlemen, I look at you and I think of the words of Stephen Spender's poem. You are men who in your "lives fought for life... and left the vivid air signed with your honor."

In 1933, Spender fell in love with Tony Hyndman, and they lived together 1935–36.[17] In 1934, Spender had an affair with Muriel Gardiner. In a letter to Christopher Isherwood in September 1934 he said: "I find boys much more attractive, in fact I am rather more than usually susceptible, but actually I find the actual sexual act with women more satisfactory, more terrible, more disgusting, and, in fact, more everything."[17] In 1936, shortly after the end of his relationship with Tony Hyndman, Spender fell in love with and married Agnes Maria Pearn (known as Inez Pearn). This marriage broke down in 1939.[17] In 1941, Spender married Natasha Litvin, a concert pianist. This marriage lasted until his death. Their daughter Lizzie is married to the Australian actor and comedian Barry Humphries, and their son Matthew Spender is married to the daughter of the Armenian artist Arshile Gorky.

Spender's sexuality has been the subject of debate. Spender's seemingly changing attitudes have caused him to be labeled bisexual, repressed, latently homophobic, or simply someone so complex as to resist easy labelling.[18] Many of his friends in his earlier years were gay. Spender himself had many affairs with men in his earlier years, most notably with Tony Hyndman (who is called "Jimmy Younger" in his memoir World Within World). Following his affair with Muriel Gardiner he shifted his focus to heterosexuality,[10] though his relationship with Hyndman complicated both this relationship and his short-lived marriage to Inez Pearn (1936–39). His marriage to Natasha Litvin in 1941 seems to have marked the end of his romantic relationships with men, although not the end of all homosexual activity, as his unexpurgated diaries reveal.[19] Subsequently, he toned down homosexual allusions in later editions of his poetry. The following line was revised in a republished edition: "Whatever happens, I shall never be alone. I shall always have a boy, a railway fare, or a revolution." was later revised to read: "Whatever happens, I shall never be alone. I shall always have an affair, a railway fare, or a revolution." Spender sued author David Leavitt for allegedly using his relationship with "Jimmy Younger" in Leavitt's While England Sleeps in 1994. The case was settled out of court with Leavitt removing certain portions from his text.

On 16 July 1995, Spender died of a heart attack in Westminster, London, aged 86.[20] He was buried in the graveyard of St Mary on Paddington Green Church in London.