Stepney is a district of the London Borough of Tower Hamlets in London's East End that grew out of a medieval village around St Dunstan's church and the 15th century ribbon development of Mile End Road. The area built up rapidly in the 19th century, mainly to accommodate immigrant workers and displaced London poor, and developed a reputation for poverty, overcrowding, violence and political dissent.[1] It was severely damaged during the Blitz, with over a third of housing totally destroyed; and then, in the 1960s, slum clearance and development replaced most residential streets with tower blocks and modern housing estates. Some Georgian architecture and Victorian era terraced housing survive in patches: for example Arbour Square, the eastern side of Stepney Green, and the streets around Matlock Street.[1][2]

The area has not yet experienced the levels of gentrification seen in nearby Bow, Wapping and Limehouse but some redevelopment has taken place. The former Arbour Square Police Station and the East End Mission building are also being redeveloped.

As with most of the East End of London, Stepney was sparsely populated marshland until the 19th century, when the development of London's docks and railways, combined with slum clearance, pushed the displaced poor and various immigrants looking for work into cheap housing being built in the area.

The first community developed around the church of St Dunstan's, which was founded in 923. Its name was recorded around 1000 AD as Stybbanhyð, "Stybba's landing-place". The Domesday Book survey of 1086 gives the name as Stibanhede and says that the land was held by the Bishop of London and was 32 hides large, mainly used for ploughing, meadows, woodland for 500 pigs, and 4 mills. There were over 100 serfs, split between villeins who ploughed the land, and cottars who assisted the villeins in return for a hut or cottage.

Bishop William held this land in demesne, in the manor of Stepney, on the day on which King Edward was alive and dead. In the same vill Ranulph Flambard holds 3½ hides of the bishop.[3]

The Manor of Stepney was held by the Bishop of London in compensation for his duties in maintaining and garrisoning the Tower of London. Further ecclesiastic holdings came about from the need to enclose the marshes and create flood defences along the Thames. Edward VI passed the land to the Wentworth family, and thence to their descendants, the Earls of Cleveland. The ecclesiastic system of copyhold, whereby land was leased to tenants for terms as short as seven years, prevailed throughout the manor. This severely limited scope for improvement of the land and new building until the estate was broken up in the 19th century.[4]

In the early 20th century, Stepney was one of the most Jewish neighbourhoods in England;[5] it was eventually replaced by Stamford Hill.[6]

The Siege of Sidney Street took place in Stepney in 1911.

Stepney is an episcopal area in the Anglican Diocese of London, which covers the London boroughs of Hackney, Islington and Tower Hamlets, and has its own suffragan bishop.[8]

The Metropolitan Borough of Stepney was formed in 1900, then dissolved in 1965 when it was absorbed into the newly created London Borough of Tower Hamlets which currently administers the area.[1]

Due to cheap housing the East End of London and Stepney has been home to various immigrants who contributed to the culture and history of the area, such as the Huguenots in the 17th century,[9] the Irish in the 18th century,[10] Ashkenazi Jews fleeing pogroms in Eastern Europe towards the end of the 19th century,[11] and the Bangladeshi community settling in the East End from the 1960s.[12] The area still contains a range of immigrants, particularly young Asian families, as well as elderly East Enders, some students, and the beginnings of a young middle class.[2] Based on 2001 census, Bangladeshis were the largest ethnic group (43%), then the White British (39%).

The area is located in between Stepney, Bethnal Green, Whitechapel, Mile End and Globe Town

Stepney Green developed as a street of residential housing off the Mile End Road in the 15th century, and is now a conservation area.[14][15] A brewery was founded in 1738 that developed into Charrington and Co. in 1897. The brewery building, the Anchor Brewery, was on the north side of Mile End Road, opposite Stepney Green; and is now the site of the Anchor Retail Unit, owned by Henderson Global Investors,[16] though the Brewery Offices still remain on the corner of Mile End Road and Cephas Avenue.[15]

St Dunstan's, founded in 923, is Stepney's oldest church. The present building dates principally from the 15th century. St Dunstan's has a long association with the sea, being responsible for registration of British maritime births, marriages and deaths until the 19th century. Malplaquet House is a Grade II listed building.

Stepney City Farm has been a feature in Stepney since opening as Stepping Stones Farm in 1979. A community resource, the farm aims to provide the people of East London a chance to experience rural life and engage in educational, environmental and creative projects. Stepney City farm is home to donkeys, cows, goats, pigs, sheep, ducks, geese, chickens, rabbits, ferrets and guinea pigs. As a working farm, eggs and vegetables are regularly sold. 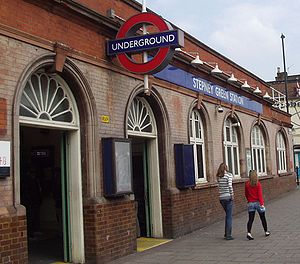 In the northern part of the district, the nearest London Underground stations are Mile End, Stepney Green and Whitechapel. All are on the Hammersmith & City and District line which go to Mile End tube station is an interchange with the Central line.

In the southern part of the district, the nearest Docklands Light Railway station is Limehouse. The station is also served by c2c, from Fenchurch Street station. It was formerly known as Stepney East.

Many London Buses Routes serve the area. Check {Connections} at Limehouse station and {Connections} at Stepney Green tube station for more information. 339 does not pass any of theres station which run in the heart of Stepney.

In the Rolling Stones' song Play with Fire, the lyrics detail remarks made by the protagonist (singer) to a woman with whom he is having a dalliance. The woman is told to view her situation in comparison to her mother, who went from living extravagantly to living among the poor: "Now she gets her kicks in Stepney/Not in Knightsbridge anymore." Earlier in the song it is indicated that the woman's father owned "a block in St. John's Wood," another pricey neighbourhood in London. Living in Stepney is used as an indicator for the woman's descent from privilege.

In Elton John's partly autobiographical album Captain Fantastic and the Brown Dirt Cowboy, the song "Bitter Fingers" contains the lyrics "When I worked the good old pubs in Stepney", referring to his early days as a musician in and around London.

In her 2002 memoir Call the Midwife, Jennifer Worth writes a graphic account of 1950's Stepney at the height of its urban decay describing bombsites, condemned buildings, filth, and rampant prostitution.

The Stepney Historical Trust was set up in 1989 to advance the public's education in the history of Stepney and the surrounding areas. It is based in the London Dockers Athletic and Social Club. It has put up a series of plaques on sites of historic interest.