From 2010 to 2014, he portrayed Enoch "Nucky" Thompson in the critically acclaimed series Boardwalk Empire, which earned him two Screen Actors Guild Awards, a Golden Globe, and two nominations for an Emmy Award. He made his directorial debut in 1996, with Trees Lounge, in which he also starred. Other works include Animal Factory (2000), Lonesome Jim (2005) and Interview (2007). He has also directed numerous episodes of TV shows, including Homicide: Life on the Street, The Sopranos, Oz, 30 Rock, and Nurse Jackie. He currently hosts the Emmy Award-nominated AOL On comedy talk-show Park Bench.

Buscemi was born in Brooklyn, New York, to John Buscemi, a sanitation worker and Korean War veteran, and Dorothy (née Wilson), who worked as a host at Howard Johnson's. Buscemi's father was of Italian descent; his ancestors were from the town of Menfi in Sicily. Buscemi's mother was of Irish, English, and Dutch ancestry.[2][3] He has three brothers: Jon, Ken, and Michael. Buscemi was raised Roman Catholic.[3]

He graduated in 1975 from Valley Stream Central High School in Nassau County, New York, a school which he attended with actress Patricia Charbonneau. In high school, Buscemi wrestled for the varsity squad and participated in the drama troupe. Buscemi's 1996 film Trees Lounge, in which he not only starred but served as screenwriter and director, is set in and was largely shot in his childhood village of Valley Stream.[4]

Buscemi briefly attended Nassau Community College before moving to Manhattan to enroll in the Lee Strasberg Institute. In 1980, Buscemi became a firefighter in New York City, after taking a civil service test in 1976 when he was 18. For four years, Buscemi served on FDNY's Engine Co. 55 in Manhattan's Little Italy.[5] After 9/11, Buscemi returned to Engine 55 and for several days worked 12-hour shifts alongside other firefighters to sift through the rubble from the World Trade Center. In 2003, he gave a speech supporting higher wages for firefighters at a union rally.[6] In 2014, he was appointed as an Honorary Battalion Chief of the FDNY.[7]

His film debut was the 1985 No Wave Cinema film The Way it Is, directed by Eric Mitchell.[8] Other early films include Parting Glances in 1986, Slaves of New York in 1988, and Tales from the Darkside, a 1990 film with three segments. Buscemi starred in the first segment, playing Bellingham, a college student who orders a mummy and unleashes it on fellow college students played by Christian Slater and Julianne Moore. In 1990, Buscemi had a couple of additional crime roles. He played the henchman of Laurence Fishburne named Test Tube in Abel Ferrara’s King of New York. He also played Mink in the Coen Brothers' Millers Crossing. Although he had to audition twice for this role,[9] it marked the first of five of the Coen Brothers' films in which Buscemi appeared. Before his work with the Coen Brothers, he appeared in Jim Jarmusch's anthology film Mystery Train, released in 1989, for which he received an Independent Spirit Award nomination for Best Supporting Male.[10] 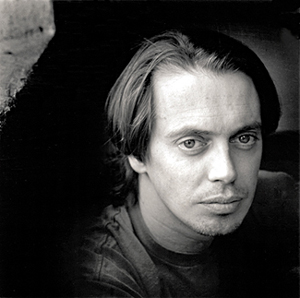 In 1991, he played the bellboy, Chet, in the Coen Brothers film, Barton Fink. His first lead role was in 1992, where he played Adolpho Rollo in Alexandre Rockwell's In the Soup. Then he came to public attention for playing Mr. Pink in Quentin Tarantino’s 1992 film, Reservoir Dogs, a role that Tarantino wrote for himself.[9] In 1995, Buscemi played suspected cop-shooter Gordon Pratt in the episode "End Game" at the end of a three-episode arc of Homicide: Life on the Street. He also had a role as Phil Hickle, Ellen's father and older Pete's guidance counselor, in The Adventures of Pete and Pete, as well as guest-starring in Miami Vice in 1986. Buscemi was rumored to be considered for the role of The Scarecrow in Joel Schumacher's proposed fifth installment of the first Batman franchise, Batman Triumphant, before Warner Bros. cancelled the project.[11]

Buscemi's other most notable character roles include Garland Greene in Con Air, Rockhound in Armageddon, Randall Boggs in Monsters, Inc. and Monsters University, Donny in The Big Lebowski, Carl Showalter in Fargo, Norther Winslow in Big Fish and Seymour in Ghost World, for which he won several awards.

Buscemi often plays characters that are neurotic and paranoid. He has frequently appeared in Adam Sandler films such as Airheads, Billy Madison, The Wedding Singer, Big Daddy, Mr. Deeds, I Now Pronounce You Chuck and Larry, Grown Ups, Grown Ups 2, and The Cobbler and has worked with Tim Burton, Quentin Tarantino, producer Jerry Bruckheimer, Jim Jarmusch, Robert Rodriguez, and Michael Bay. He has said of his work, "I don’t think of myself as having a career. I think of having jobs. When I work, I want to have good jobs. I want to do interesting films. I also want to make a living. You don’t always work on the things that you can put your heart into, so it’s good to work on things that you can get into one hundred percent."[9]

In 2002, Steve contributed to Lou Reed's concept album The Raven with the song "Broadway Song", and poems "Old Poe" and "The Cask". In 2003, Buscemi made a brief celebrity guest appearance as himself on the long-running Fox animated television show The Simpsons in the episode "Brake My Wife, Please". Most recently, Buscemi provided the voice for Dwight, a bank robber whom Marge promises to visit in jail if he turns himself in to the authorities. This episode, entitled "I Don't Wanna Know Why the Caged Bird Sings", originally aired on October 14, 2007. In 2004, Buscemi joined the cast of The Sopranos as Tony Soprano's cousin and childhood friend, Tony Blundetto, a role for which he was nominated an Emmy Award.[12] Buscemi had previously contributed to the show as director of the third season episode "Pine Barrens", which was one of the most critically acclaimed episodes of the series, and the fourth season episode "Everybody Hurts."[13] He appeared in the episode three of season six, as a doorman in the afterlife, which is portrayed as a country club, in Tony Soprano's dream. He returned to direct the episodes "In Camelot", the seventh episode of season five, and "Mr. & Mrs. John Sacrimoni Request...", the fifth episode of season 6. He also appeared in the music video of the Bob Marley track cover of Joe Strummer's (who died before it was shot) "Redemption Song" with a graffiti portrait.

Buscemi starred in the HBO series Boardwalk Empire, as Enoch "Nucky" Thompson (based on Enoch L. Johnson), a corrupt Atlantic City politician who rules the town during the Prohibition era. He won a Golden Globe award for best lead actor in a drama series and hosted NBC's Saturday Night Live in 2011. He also hosts and produces his own web series talk show, Park Bench, which debuted in May 2014.[14]

Buscemi has also worked as a director, making his directing debut in the 1990s. His directorial credits include:

In addition to feature films, he directed episodes of the television shows Homicide: Life on the Street, four episodes of The Sopranos, including one of the most critically acclaimed episodes: Pine Barrens, as well as two episodes of HBO's prison-drama series Oz, entitled "U.S. Male" and "Cuts Like a Knife". He has also directed two episodes of 30 Rock ("Retreat to Move Forward" and "Leap Day") and six episodes of Showtime's Nurse Jackie. In the latter, his brother Michael played the character God in several episodes. While scouting a location for a film, Buscemi visited the Philadelphia Eastern State Penitentiary and found the building so interesting that he later provided the majority of the narration for the audio tour there.[15][16]

Buscemi pronounces his name as "Bu-semmy", but the Italian pronunciation is "Bu-shemmy".[17] He once said about the pronunciation of his name: "I had to go to Sicily to find out I pronounce my name wrong."[1] In an interview with The Hollywood Reporter, he was adamant about not altering his famously misaligned teeth, saying "I've had dentists who have wanted to help me out, but I say, 'You know, I won't work again if you fix my teeth."[18][19] Another aspect of Buscemi's image are his eyes which are noted for their old appearance and wrinkles. "Buscemi Eyes" is a phenomenon when his eyes are photoshopped onto others' faces. His own reaction is that he doesn't find it amusing, while his wife does.[20] Buscemi guest starred in Season 7 Episode 6 of 30 Rock as a private investigator. During a flashback, he appears to be disguised as a teenager as he says that he was "part of a special task force of very young-looking cops who infiltrated high schools."[21][22] This image has been popularly used as a reaction image.[23]

Buscemi was a New York City firefighter from 1980 to 1984, with Engine Company No. 55, in the Little Italy section of New York. He showed up at his old firehouse the day after the 9/11 attacks in New York to volunteer, working twelve-hour shifts for a week, and digging through rubble looking for missing firefighters. Buscemi was arrested, along with eleven others, on May 25, 2003, while protesting the closing of a number of firehouses including Engine 55.[24] In the summer of 2011, he joined rallies against the threat of the closing of eight Brooklyn firehouses under Mayor Bloomberg, saying "Closing [these firehouses] is no way to protect New York."[25] In 2014, Buscemi starred and narrated the HBO documentary A Good Job: Stories of the FDNY where he revisits his career with fellow firefighters and shares their stories including those from September 11th.[26]

In April 2001, while shooting the film Domestic Disturbance in Wilmington, North Carolina, Buscemi was slashed and badly scarred on the face while at the Firebelly Lounge, intervening in a bar fight between his friends Vince Vaughn, screenwriter Scott Rosenberg, and a local man, who allegedly instigated the brawl.[27][28]

He was in an episode of Who Do You Think You Are?, where he traced his maternal ancestry back to Julia Vanderhoof and Ralph B. Montgomery (1834-1878).[29]

Buscemi's acting career began in the mid-1980s, with roles in Not Necessarily the News, Parting Glances and Kiss Daddy Goodnight, among others. His supporting work in Jim Jarmusch's 1989 film Mystery Train earned him a nomination for an Independent Spirit Award. A few years later he won that award, for his work in Quentin Tarantino's film Reservoir Dogs. He has received other forms of recognition in subsequent films such as Fargo (1996), Trees Lounge (1996, as writer and director), and Ghost World (2001). In television, his work on The Sopranos, Boardwalk Empire, and Portlandia has received recognition.