Sir James Cochran Stevenson Runciman CH (7 July 1903 – 1 November 2000), known as Steven Runciman, was an English historian best known for his three-volume A History of the Crusades (1951–54).

His three-volume history has had a profound impact on common conceptions of the Crusades, primarily portraying the Crusaders negatively and the Muslims favorably.[1] Runciman was a strong admirer of the Byzantine Empire, and consequently held a bias evident in his work against the Crusaders for the Fourth Crusade.[2] While praised by older crusade historians as a storyteller and prose stylist, he has been largely discredited by contemporary historians.[3][4]

Runciman personally described himself as "not a historian, but a writer of literature."[3]

It is said that he was reading Latin and Greek by the age of five. In the course of his long life he would master an astonishing number of languages, so that, for example, when writing about the Middle East, he relied not only on accounts in Latin and Greek and the Western vernaculars, but consulted Arabic, Turkish, Persian, Hebrew, Syriac, Armenian and Georgian sources as well. A King's Scholar at Eton College, he was an exact contemporary and close friend of George Orwell. While there, they both studied French under Aldous Huxley.

In 1921 he entered Trinity College of Cambridge University as a history scholar and studied under J.B. Bury, becoming, as Runciman later commented, "his first, and only, student". At first the reclusive Bury tried to brush him off; then, when Runciman mentioned that he could read Russian, Bury gave him a stack of Bulgarian articles to edit, and so their relationship began. His work on the Byzantine Empire earned him a fellowship at Trinity in 1927.

After receiving a large inheritance from his grandfather, Runciman resigned his fellowship in 1938 and began travelling widely. From 1942 to 1945 he was Professor of Byzantine Art and History at Istanbul University, in Turkey, where he began the research on the Crusades which would lead to his best known work, the History of the Crusades (three volumes appearing in 1951, 1952, and 1954). Most of Runciman's historical works deal with Byzantium and her medieval neighbours between Sicily and Syria; one exception is The White Rajahs, published in 1960, which tells the story of Sarawak, an independent state founded on the northern coast of Borneo in 1841 by an Englishman James Brooke, and ruled by the Brooke family for more than a century.

In his personal life, Runciman was an old-fashioned English eccentric, known, among other things, as an aesthete, raconteur, and enthusiast of the occult. According to Andrew Robinson, a history teacher at Eton, "he played piano duets with the last Emperor of China, told tarot cards for King Fuad of Egypt, narrowly missed being blown up by the Germans in the Pera Palace hotel in Istanbul and twice hit the jackpot on slot machines in Las Vegas".

He died in Radway, Warwickshire, while visiting relatives, aged 97. He was interred in Lockerbie, Dumfriesshire.

Jonathan Riley-Smith, one of the leading historians of the Crusades,[5] has frequently denounced Runciman for his perspective on the Crusades.[6] Riley-Smith had been told by Runciman during an on-camera that he considered himself "not a historian, but a writer of literature."[3]

According to Christopher Tyerman, Runciman created a work that "across the Anglophone world continues as a base reference for popular attitudes, evident in print, film, television and on the internet."[2] The historically inaccurate 2005 film Kingdom of Heaven is an example of pop culture influenced by Runciman's work.[2]

Runciman held sympathies toward the Byzantine Empire and blamed the Crusaders, whom he considered "intolerant barbarians", for causing the downfall of in the Fourth Crusade. Consequently, a bias against the Crusaders is evident in his work. Runciman called the Fourth Crusade the greatest crime committed against humanity less than a decade after the Second World War.[2]

Edward Peters (2011) says that Runciman's three-volume narrative history, "instantly became the most widely known and respected single-author survey of the subject in English."[7]

John M. Riddle (2008) says that for the greater part of the twentieth century Runciman was the "greatest historian of the Crusades." He reports that, "Prior to Runciman, in the early part of the century, historians related the Crusades as an idealistic attempt of Christendom to push Islam back." Runciman regarded the Crusades "as a barbarian invasion of a superior civilization, not that of the Muslims but of the Byzantines."[8]

It is no exaggeration to say that Runciman single-handedly crafted the current popular concept of the crusades. The reasons for this are twofold. First, he was a learned man with a solid grasp of the chronicle sources. Second, and perhaps more important, he wrote beautifully. The picture of the crusades that Runciman painted owed much to current scholarship yet much more to Sir Walter Scott. Throughout his history Runciman portrayed the crusaders as simpletons or barbarians seeking salvation through the destruction of the sophisticated cultures of the east. In his famous "summing-up" of the crusades he concluded that "the Holy War in itself was nothing more than a long act of intolerance in the name of God, which is a sin against the Holy Ghost.”[9]

Mark K. Vaughn (2007) says "Runciman's three-volume History of the Crusades remains the primary standard of comparison." However Vaughn claims that Tyerman "accurately, if perhaps with a bit of hubris, notes that Runciman's work is now outdated and seriously flawed."[10] But Tyerman himself has said "It would be folly and hubris to pretend to compete, to match, as it were, my clunking computer keyboard with his [Runciman's] pen, at once a rapier and a paintbrush; to pit one volume, however substantial, with the breadth, scope and elegance of his three."[11] 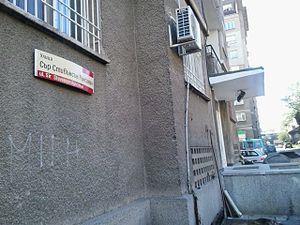