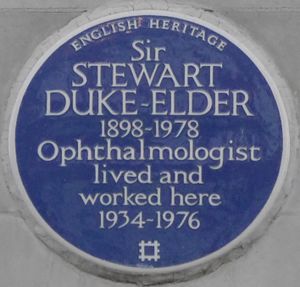 Sir William Stewart Duke-Elder GCVO FRS FRCP FRCS[1] (22 April 1898 – 27 March 1978), a Scottish ophthalmologist born in Tealing near Dundee, was a dominant force in his field for more than a quarter of a century. His father was a minister of the Free Church of Scotland in Tealing, the Rev. Neil Elder.

He entered the University of St Andrews in 1915 on scholarship and graduated in 1919 with a BSc in Physiology and MA (Hons) in Natural Sciences. He graduated from the University of St Andrews School of Medicine in 1923 with an MB ChB. In 1925 he earned an MD from St Andrews for his dissertation on 'Reaction of the eye to changes in osmotic pressure of the blood'. In 1927, he earned a DSc from St Andrews for his thesis on 'The nature of the intraocular fluids and the pressure equilibrium in the eye'. He is best remembered as a talented and prolific writer and editor, producing seven volumes of Textbook of Ophthalmology and fifteen volumes of System of Ophthalmology, along with many other textbooks and scientific papers that provided the educational foundation for most of the world's ophthalmologists. This monumental contribution to medical literature earned him the title of Fellow of the Royal Society in 1960.[1]

In addition to his own writings, Duke-Elder served for many years as editor and chairman of the editorial committee of the British Journal of Ophthalmology and Ophthalmic Literature and he was instrumental in the formation and research direction of the Institute of Ophthalmology, now part of the University College London. He was knighted in 1933 and subsequently earned many more honors, serving as the Surgeon-Oculist to King Edward VIII, George VI and Queen Elizabeth II. In 1946 he formed the Faculty of Ophthalmologists.

He was awarded the 1957 Lister Medal for his contributions to surgical science.[2] The corresponding Lister Oration, given at the Royal College of Surgeons of England, was delivered on 28 March 1958, and was titled 'The Emergence of Vision in the Animal World'.[3]