Stilton is an English cheese, produced in two varieties: Blue known for its characteristic strong smell and taste, and the lesser-known White.

Both Blue Stilton and White Stilton have been granted the status of a protected designation of origin by the European Commission. The PDO status requires that only cheese produced in the three counties of Derbyshire, Leicestershire, and Nottinghamshire and made according to a strict code may be called "Stilton"; thus cheese made in the village of Stilton cannot be called "Stilton". 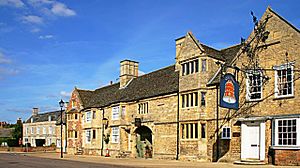 The Bell Inn at Stilton

According to the Stilton Cheesemaker's Association, the first Englishman to market Blue Stilton cheese was Cooper Thornhill, owner of the Bell Inn on the Great North Road, in the village of Stilton, Huntingdonshire.[2] Traditional legend has it that in 1730, Thornhill discovered a distinctive blue cheese while visiting a small farm near Melton Mowbray in rural Leicestershire – possibly in Wymondham.[3] He fell in love with the cheese and made a business arrangement that granted the Bell Inn exclusive marketing rights to Blue Stilton. Soon thereafter, wagon loads of cheese were being delivered to the inn. Since the main stagecoach routes from London to Northern England passed through the village of Stilton he was able to promote the sale of this cheese and the fame of Stilton rapidly spread.

However, the first known written reference to Stilton cheese actually predates this and was in William Stukeley's Itinerarium Curiosum, Letter V, dated October 1722. Daniel Defoe in his 1724 work A tour thro' the whole island of Great Britain notes, "We pass'd Stilton, a town famous for cheese, which is call'd our English Parmesan, and is brought to table with the mites, or maggots round it, so thick, that they bring a spoon with them for you to eat the mites with, as you do the cheese."[4]

Frances Pawlett (or Paulet), a "skilled cheese maker" of Wymondham, has traditionally been credited as the person who set modern Stilton cheese's shape and style characteristics in the 1720s,[5][6] but others have also been named.[7] The recipe for a Stilton cheese was published by Richard Bradley, first Professor of Botany at Cambridge University in his 1726 book A General Treatise of Husbandry and Gardening. Bradley records a letter from a correspondent, John Warner, which states the cheese is made in Stilton and that the Bell Inn produced "the best cheese in town".[8]

In 1936 the Stilton Cheesemakers' Association (SCMA) was formed to lobby for regulation to protect the quality and origin of the cheese, and in 1966 Stilton was granted legal protection via a certification trademark, the only British cheese to have received this status.[2] 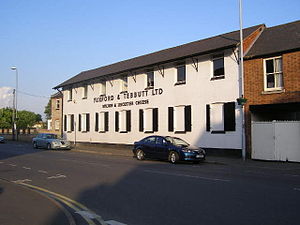 Blue Stilton's distinctive blue veins are created by piercing the crust of the cheese with stainless steel needles, allowing air into the core. The manufacturing and ripening process takes approximately nine to twelve weeks.

For cheese to use the name "Stilton", it must be made in one of the three counties of Derbyshire, Leicestershire and Nottinghamshire, and must use pasteurised local milk. The manufacturers of Stilton cheese in these counties applied for and received Protected Geographical Status (PDO) in 1996.

There are currently just six[9] dairies licensed to make Stilton (three in Leicestershire, two in Nottinghamshire and one in Derbyshire), each being subject to regular audit by an independent inspection agency accredited to European Standard EN 45011. Four of the licensed dairies are based in the Vale of Belvoir, which straddles the Nottinghamshire-Leicestershire border. This area is commonly regarded as the heartland of Stilton production, with dairies located in the town of Melton Mowbray (Leics.) and the villages of Colston Bassett (Notts.), Cropwell Bishop (Notts.), Long Clawson (Leics.) and Saxelbye (Leics.). Another Leicestershire dairy was located in the grounds of Quenby Hall near the village of Hungarton, which is outside the generally accepted boundaries of the Vale of Belvoir. Quenby Hall restarted Stilton production in a new dairy in August 2005 (the old dairy dates back to the 18th century) but the business folded in 2011.[10] The former Dairy Crest-owned licensed dairy that produced Stilton at Hartington in Derbyshire was acquired by the Long Clawson dairy in 2008 and closed in 2009, with production transferred to Leicestershire. Two former employees set up the Hartington Creamery at Pikehall in Hartington parish which was licensed in 2014.[11]

Stilton cheese cannot be currently produced in the village that gave the cheese its name.[12] Stilton village is not in the three permitted counties; it is in the administrative county of Cambridgeshire, and in the historic county of Huntingdonshire. The Original Cheese Company applied to Defra to amend the Stilton PDO to include the village but the application was rejected in 2013.[13]

To be called "Blue Stilton", a cheese must:[citation needed]

A number of blue cheeses are made in a similar way to Blue Stilton. These cheeses get their blue veins and distinct flavour from the use of one or more saprotrophic fungi such as Penicillium roqueforti and Penicillium glaucum.

Stichelton is made in the same way as Stilton cheese and uses cows' milk from a permitted county (Nottinghamshire), but the milk is unpasteurised and so under the PDO it cannot be designated as true Stilton.

Since the PDO came into effect, some British supermarkets have stocked a generic British Blue cheese. Other makers have adopted their own names and styles. Blacksticks Blue, Garstang Blue, Cote Hill and Lincoln Blue are typical examples.

Blue Stilton is often eaten with celery or pears. It is also commonly added as a flavouring to vegetable soup, most notably to cream of celery or broccoli.[15] Alternatively it is eaten with various crackers, biscuits and bread. It can also be used to make a blue cheese sauce to be served drizzled over a steak, or can be crumbled over a salad. Traditionally, a barleywine or port are paired with Blue Stilton, but it also goes well with sweet sherry or Madeira wine. The cheese is traditionally eaten at Christmas.[16] The rind of the cheese forms naturally during the aging process, and is perfectly edible, unlike the rind of some other cheeses such as Edam or Port-Salut.

"White Stilton" has not had the Penicillium roqueforti mould introduced into it which would otherwise lead to the blue veining normally associated with Stilton. It is a crumbly, creamy, open textured cheese and is now extensively used as a base for blending with apricot, ginger and citrus or vine fruits to create unique dessert cheeses and has even been used as a flavouring for chocolate.[17]

Huntsman cheese is made with both Blue Stilton and Double Gloucester.

A 2005 survey carried out by the British Cheese Board reported that Stilton cheese seemed to cause unusual dreams when eaten before sleep, with 75% of men and 85% of women experiencing "odd and vivid" dreams after eating a 20-gram serving of the cheese half an hour prior to sleeping.[18]

British author G. K. Chesterton wrote a couple of essays on cheese, specifically on the absence of cheese in art. In one of his essays he recalls a time when he, by chance, visited a small town in the fenlands of England, which turned out to be Stilton. His experience in Stilton left a deep impression on him, which he expressed through poetry in his Sonnet to a Stilton Cheese:

Stilton, thou shouldst be living at this hour
And so thou art. Nor losest grace thereby;
England has need of thee, and so have I—
She is a Fen. Far as the eye can scour,
League after grassy league from Lincoln tower
To Stilton in the fields, she is a Fen.
Yet this high cheese, by choice of fenland men,
Like a tall green volcano rose in power.
Plain living and long drinking are no more,
And pure religion reading "Household Words",
And sturdy manhood sitting still all day
Shrink, like this cheese that crumbles to its core;
While my digestion, like the House of Lords,
The heaviest burdens on herself doth lay.

This is in part a parody of William Wordsworth's sonnet London, 1802, the opening line of which was "Milton! thou shouldst be living at this hour."

George Orwell wrote an essay, "In Defence of English Cooking", first published in the Evening Standard on 15 December 1945. While enumerating the high points of British cuisine, he touches on Stilton: "Then there are the English cheeses. There are not many of them but I fancy that Stilton is the best cheese of its type in the world, with Wensleydale not far behind."

The Stilton Cheese Makers Association has produced a fragrance called "Eau de Stilton" which "is very different to the very sweet perfumes you smell wafting down the street as someone walks past you".[19]

The search for an unpasteurised Stilton cheese was a plot element of a Chef! episode entitled "The Big Cheese", aired on the BBC One television station on 25 February 1993.