Stoffel Vandoorne (born 26 March 1992) is a professional racing driver from Belgium, currently competing in Super Formula.[1] He is also the reserve driver for the McLaren Formula One team, and made his debut at the 2016 Bahrain Grand Prix.

Born in Kortrijk, Vandoorne began his karting career in 1998 at age six, and ten years later won the Belgian KF2 Championship. In 2009 he finished as runner-up in the CIK-FIA World Cup in the KF2 category.[2]

In 2010, Vandoorne moved up to single-seater racing, joining the F4 Eurocup 1.6 series.[3] He went on to win the series on his first attempt, finishing the season with six wins and three further podium finishes.[4]

In 2011, he graduated to competing in the Eurocup Formula Renault 2.0 with Kurt Mollekens' KTR team.[5] He finished fifth overall, with one podium at the Hungaroring and another eight point-scoring finishes throughout the season.[6] He also participated in Formula Renault 2.0 Northern European Cup, where he finished third in the series' standings with eight podiums.[7]

For the 2012 season Vandoorne remained in the Eurocup, but left KTR to join Josef Kaufmann Racing.[8] He won the championship by ten points after a tight battle between himself and Red Bull backed Daniil Kvyat. Between them they won 11 of the 14 races and finished over 100 points ahead of their nearest challenger. Vandoorne finished the season with four wins and six podiums to his name. He also contested selected events in the Northern European Cup, where he won five of the seven races that he started, and finished on the podium in a sixth race.

In 2013, Vandoorne raced in Formula Renault 3.5, where he replaced 2012 champion Robin Frijns at Fortec Motorsport.[9] He finished runner-up to fellow McLaren young driver Kevin Magnussen with four wins and 10 podiums, including a victory at his home track of Spa-Francorchamps. 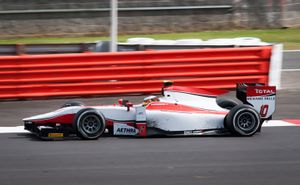 Vandoorne racing at the Silverstone round of the 2014 GP2 Series

In January 2014, it was confirmed that Vandoorne would make his debut in GP2, racing with ART. In the opening race at Bahrain, Vandoorne claimed his first victory of the season in the feature race. He followed this up with four consecutive pole positions, three more wins at the Hungaroring, Monza and Yas Marina and six additional podiums. Despite being a rookie, he finished runner-up to 2014 champion Jolyon Palmer.

Vandoorne reunited with ART for 2015, as well as was considered the main title contender.[10] He was partnered by 2014 Japanese Formula Three champion Nobuharu Matsushita. After five feature race wins, twelve podiums and four pole positions, Vandoorne took the title in Sochi, 108 points over his nearest rival Alexander Rossi.

In February 2013, Vandoorne joined McLaren's Young Driver Programme,[11] under the tutelage of his manager Richard Goddard, in collaboration with the team's sporting director Sam Michael and its head of communications Matt Bishop, to whom Vandoorne had been introduced in 2011 by Alex Wurz.[12][13]

In January 2014, he was announced as a third driver for McLaren F1 also taking up driving duties in the GP2 Series for ART Grand Prix.[14] 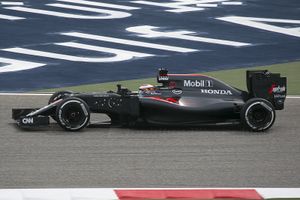 Vandoorne on his F1 debut, driving for McLaren at the 2016 Bahrain Grand Prix

On 31 March 2016, it was announced Vandoorne would be replacing regular driver Fernando Alonso at the Bahrain Grand Prix after the Spaniard was ruled unfit to drive following a major accident in the previous round.[15] After qualifying 12th ahead of Jenson Button, Vandoorne finished 10th and became the first reserve driver to score points on debut since Sebastian Vettel at the 2007 United States Grand Prix.