File:StokeGiffordParkByKip.jpg
Stoke Park, Stoke Gifford, Glos., hypothetical view from the south-east, as painted by Johannes Kip in 1707. It then belonged to John Berkeley esquire, as stated by the caption above which displays the arms of Berkeley of Stoke Gifford. Published in Britannia Illustrata 1724 edition 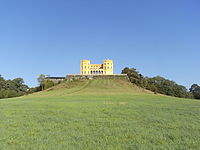 Stoke Park in 2011, viewed from south, as visible from the northbound carriageway of the M32 motorway which now cuts across the former parkland. Now known as "The Dower House" and split into private apartments. An engraving of Stoke Park was published in Copperplate Magazine in 1796[1]

Stoke Gifford is a large dormitory village, and parish in South Gloucestershire, England, in the northern suburbs of Bristol. It had around 11,000 residents at the 2001 census, increasing to 15,494 at the 2011 census. It is home to Bristol Parkway station, on the London-South Wales railway line, and the Bristol offices of Friends Life, Hewlett Packard and The University of the West of England.[2] The parish includes neighbouring Little Stoke, Harry Stoke and Stoke Park. The parish borders Filton, to the south-west, Patchway to the north west, Bradley Stoke to the north and Winterbourne and Hambrook to the east.[2] To the south Stoke Gifford is served by the Bristol Ring Road, south of this a large green area known as the 'Green Lung' stretches to the inner city area of St Werburgh's.

Descent of the manor

Following the Norman Invasion of 1066, William the Conqueror gave the manor of Stoke Gifford to Osbern Giffard, one of his generals.[3] ).[3] Giffard himself was a native of Longueville-le-Giffard, Normandy, now known as Longueville-sur-Scie, which is where the 'Gifford' suffix of the name derives from. The 'Stoke' suffix may come from the Stoke Brook, 'Stoke' may also be a reference to the Saxon word 'Stoche' meaning 'property of or dependent farmstead'. Bradley Stoke and Stoke Lodge, both 20th Century estates were also given the name. Extensive histories of Stoke Gifford can be found on Adrian Kerton's web pages[4] and the website of Southern Brooks Archaeology.[5]

The local church, St Michael's Church, is influential in running this village[citation needed] and it is the centre of the community for many of the residents.

The area falls in the Stoke Gifford electoral ward. This ward starts in the east at Winterbourne. The total population of the ward taken at the 2011 census was also 15,494.

The church runs a pre-school nursery in the old vicarage, and a small coffee shop in the Old School Rooms across The Green from the church, which itself backs onto Parkway Railway Station, an essential transport link for the local people. Also in the local area are two parks, each with children's play equipment; a pair of tennis courts and a pub, the Beaufort Arms. A branch of the Co-Op supermarket chain has recently (October 2013) opened in what used to be the Parkway Tavern. There is a row of shops on Ratcliffe Drive including a Tesco Express, dentist and medical centre and few more shops on one of the roads off North Road. There is a large supermarket within walking distance and most of the local children walk or cycle to nearby St Michael's C of E Primary School & Abbeywood Community School.

Expansion in the 20th century

Like much of the nearby area, Stoke Gifford undertook rapid expansion in the 20th century, prior to the 1980s Stoke Gifford was just a small village, straggling along the main street, North Road.

The local area is very good at providing for the local school children. As well as the parks and tennis courts, many activities and groups run from the Old School Rooms, including Explorer Scouts, Scouts, Cub Scouts, Beaver Scouts, Brownies.

St.Michael's School was listed in the December 2008 report as 'St Michael's is a good school...the care, guidance and support for pupils is outstanding' Link to the school website below.

In 2008, a new pre-school and Nursery opened adjacent to Bristol Parkway due to the population increases of the surrounding areas.

Bristol Technology and Engineering Academy is a university technical college opened in Stoke Gifford in September 2013.

The history of Stoke Gifford can be found on Adrian Kerton's home page and the Southern Brooks Archaeology Site.