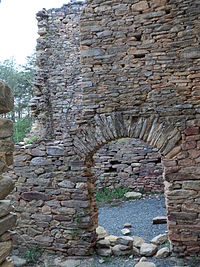 The county was formed in 1789 from Surry County. It was named for John Stokes, an American Revolutionary War captain severely wounded when British Colonel Banastre Tarleton's cavalry practically destroyed Col. Abraham Buford's Virginia regiment in the Waxhaws region in 1780. After the war, Captain Stokes was appointed a judge of the United States district court for North Carolina. In 1849 the southern half of Stokes County became Forsyth County.[citation needed]

During the American Civil War, Moratock Iron Furnace located near Danbury served as a foundry for the Confederate Army. It was destroyed in April 1865 when Union cavalry under the command of General George Stoneman conducted extensive raiding through the region.

Hanging Rock State Park was formed primarily from blocks of land donated in 1936 and contained 6,921 acres (28.01 km2) in 2005. Many of the facilities in the park were built by the Civilian Conservation Corps between 1935 and 1942. The park is located atop the Sauratown Mountains, and contains a visitor's center, a manmade lake, and plenty of hiking trails, climbing trails, picnic areas, and primitive campgrounds.

File:SauratownMountains.wmg.jpg
The Sauratown Mountains cut through Stokes County which is otherwise gently rolling piedmont hills. The Blue Ridge Mountains in the background lie to the west of Stokes County.

The county lies within the Piedmont region of western North Carolina, and most of the terrain consists of gently rolling countryside. However, the Sauratown Mountains run across the center of the county. The Sauras are named after the Saura Native American tribe which lived in the county before European settlement. A chain of jagged ridges, the Sauratown Mountains are an isolated remnant of the Blue Ridge Mountains far to the west. Although the Sauratown Mountains occupy only 5% of Stokes County, they dominate the scenery from almost any direction, abruptly rising from 800 to 1,700 feet (520 m) above the surrounding terrain. Moore's Knob, the highest point in the chain, rises to 2,579 feet (786 m). Most of the county is less than 1,000 feet (300 m) above sea level. The Dan River runs from the Northwest Corner to the Southeastern section of Stokes County (Covering over 56 Miles of River Recreation). Stokes County home to Hanging Rock State Park and also has the mass majority of Belews Lake (located in the southeast corner).

Stokes County is a member of the regional Northwest Piedmont Council of Governments. Stokes County government is made up of 5 Elected County Commissioners with an Appointed County Manager and Appointed Tax Administrator. Other Elected Officials are the Sheriff, Clerk of Court, and Register of Deeds. School Board Members are Elected to a 5 Member Board who appoint a Superintendent and present the budget to County Commissioners for approval.

Stokes County has long been a "bedroom community" or "commuter town" for larger towns surrounding, such as Winston-Salem, Greensboro, Mount Airy, etc. Stokes County has struggled with economic development for several reasons such as infrastructure. The leaders in the county understand this and are working to create new opportunities and upgrades to enhance growth. Several medium and small businesses have found success in Stokes, as well as retail stores, restaurants, and service professionals. The largest employer in the county is the government/school system. 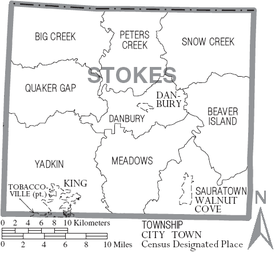