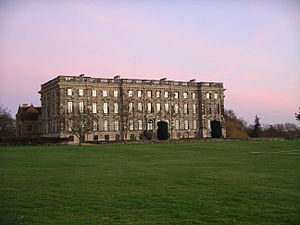 Stoneleigh Abbey is a large country mansion situated to the southwest of the village of Stoneleigh, Warwickshire, England. It is a Grade I listed building.[1]

The Abbey was founded by the Cistercians in 1154. but very little trace remains of the original Abbey buildings except for the 14th century Gatehouse.[2]

After the Dissolution of the Monasteries the estate was acquired by Sir Thomas Leigh, Lord Mayor of London in 1558, and a house was built ( which now forms the north and west wings of the present house) on the site of the monastic buildings. It was the home of the Leigh family from 1561 to 1990.

Between 1714 and 1726 a new palatial four story fifteen bay west wing was built to designs by architect Francis Smith of Warwick and provides an impressive range of State apartments.

The adjacent stables and riding school block[3] and the conservatory[4] are separately listed as Grade II*.

In 1996 Lord Leigh transferred the ownership of Stoneleigh Abbey and its 690-acre (279 ha) grounds to a charitable trust, and then between 1996 and 2000 it was extensively renovated with the help of grants including a £7.3 million grant from the Heritage Lottery Fund and additional grants of more than £3 million from English Heritage fund and the European Union.[5] The upstairs floors were converted into private apartments by Kit Martin. The property has access to the public.

In the early 2000s, Charles Church built two exclusive selections of large homes in the grounds of Stoneleigh Abbey, named The Cunnery and Grovehurst Park.

The money received by the trust was a subject on The Mark Thomas Comedy Product, which proved that some of the trust's debts were paid using the National Lottery money as well as paying for private development.[5]