Stoolball is a sport that dates back to at least the 15th century, originating in Sussex, southern England. It may be an ancestor of cricket (a game it resembles), baseball, and rounders, in fact stoolball is sometimes called "Cricket in the air". Traditionally it was played by milkmaids who used their milking stools as a "wicket".

The game's popularity has faded since the 1960s, but is still played at a local league level in Sussex, Kent, Surrey and the Midlands. The National Stoolball Association was formed in 1979 to promote and expand stoolball.[1] The game was officially recognised as a sport by the Sports Council in early 2008.[2] The National Stoolball Association changed its name to Stoolball England in 2010 on the advice of the Sports Council and was recognised as the National Governing Body for stoolball in England in 2011. Some variants are still played in some schools. Teams can be ladies only or mixed. There are ladies' leagues in Sussex, Surrey and Kent and mixed leagues in Sussex. 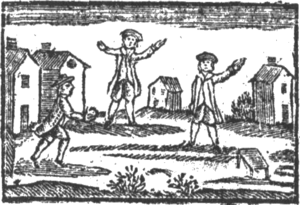 Stoolball is attested by name as early as 1450. Nearly all medieval references describe it as a game played during Easter celebrations, typically as a courtship pastime rather than a competitive game. The game's associations with romance remained strong into the modern period; Fletcher and Shakespeare's comedy The Two Noble Kinsmen, used the phrase "playing stool ball" as a euphemism for sexual behaviour.[3][4]

Stoolball makes an appearance in the dictionary of Samuel Johnson, where it is defined as a game played by driving a ball from stool to stool.

Confusion with the game of Stoball

According to Alice Gomme, the earliest references show that the game was called Stobball or Stoball,[5] and was a game peculiar to North Wilts, North Gloucestershire, and a little part of Somerset, near Bath: but although 17th century antiquarian John Aubrey describes a game called "stobball", played in this area, his description of it does not sound like stoolball,[6] and another contemporary text from the same region characterises "stoball" as a game played mainly by men and boys.[7] The Oxford English Dictionary considers it unlikely that "stool ball" could have been corrupted into "stobball".[8]

Stoolball is played on grass with a 90-yard (82-metre) diameter boundary, and the pitch is 16 yards (15 metres) long. Each team consists of 11 players, with one team fielding and the other batting. Bowling is underarm from a bowling "crease" 10 yards (9.1 metres) from the batsman's wicket, with the ball reaching the batsman on the full as in rounders or baseball rather than bouncing from the pitch as in cricket. Each over consists of 8 balls. The "wicket" itself is a square piece of wood at head or shoulder height fastened to a post. Traditionally the seat of a stool hung from a post or tree was used. Some versions used a tall stool placed upright on the ground.

Originally the batsman simply had to defend his stool from each ball with his hand and would score a point for each delivery until the stool was hit. The game later evolved to include runs and bats.

There was a game called stoolball played by the prisoners-of-war at Colditz castle during World War II. It is described by P. R. Reid as similar to rugby football and is unrelated to the traditional Sussex game.