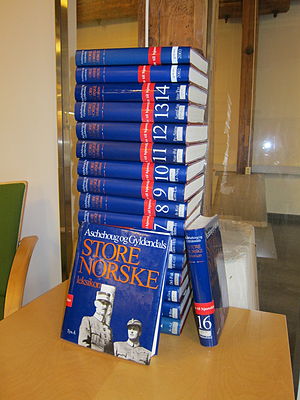 Store norske leksikon, abbreviated SNL, is a Norwegian language (bokmål) encyclopedia. The SNL was created in 1978 when the two publishing houses Aschehoug and Gyldendal merged their encyclopedias and created the company Kunnskapsforlaget. The name translates into English as Great Norwegian encyclopedia. Up until 1978 the two publishing houses of Aschehoug and Gyldendal, Norway's two largest, had published Aschehougs konversasjonsleksikon and Gyldendals konversasjonsleksikon, respectively. The respective first editions were published in 1907–1913 (Aschehoug) and 1933–1934 (Gyldendal).

The slump in selling paperbased encyclopedias around the turn of the 21st century hit the Kunnskapsforlaget hard, but a fourth edition of the paperbased encyclopedia was finally secured by a grant of 10 million Norwegian kroner from the foundation Fritt Ord in 2003. The fourth edition consists of 16 volumes, a total of 12,000 pages and 280,000 entries.

On 12 March 2010 Store Norske Leksikon announced that from 1 July 2010 there would be no new editions of Store Norske Leksikon, because of lacklustre sales. The main reason behind this decision was stated to be because of Wikipedia. It was also announced that the articles will not be given to the Wikipedia Foundation, with chief-editor Petter Henriksen stating that: "It is important that the people behind the articles remain visible".[1]

SNL became available online since 2000 and had several hundred thousand subscribers, both private and institutional. The number of online articles is about 150,000. Since 25 February 2009, the online encyclopedia has been free.[2]