From Infogalactic: the planetary knowledge core
Jump to: navigation, search
For other uses, see Stork (disambiguation).

Storks are large, long-legged, long-necked wading birds with long, stout bills. They belong to the family Ciconiidae. They are the only family in the order Ciconiiformes, which was once much larger and held a number of families.

Storks dwell in many regions and tend to live in drier habitats than the closely related herons, spoonbills and ibises; they also lack the powder down that those groups use to clean off fish slime. Storks have no syrinx and are mute, giving no call; bill-clattering is an important mode of communication at the nest. Many species are migratory. Most storks eat frogs, fish, insects, earthworms, small birds and small mammals. There are nineteen living species of storks in six genera.

Various terms are used to refer to groups of storks,[1] two frequently used ones being a muster of storks and a phalanx of storks.

Storks tend to use soaring, gliding flight, which conserves energy. Soaring requires thermal air currents. Ottomar Anschütz's famous 1884 album of photographs of storks inspired the design of Otto Lilienthal's experimental gliders of the late nineteenth century. Storks are heavy, with wide wingspans: the marabou stork, with a wingspan of 3.2 metres (10.5 feet) and weight up to 8 kg (18 lbs), joins the Andean condor in having the widest wingspan of all living land birds.

Their nests are often very large and may be used for many years. Some nests have been known to grow to over two metres (six feet) in diameter and about three metres (ten feet) in depth. Storks were once thought to be monogamous, but this is only partially true. They may change mates after migrations, and may migrate without a mate.

Storks' size, serial monogamy, and faithfulness to an established nesting site contribute to their prominence in mythology and culture.

The Modern English word can be traced back to Proto-Germanic *sturkaz. Nearly every Germanic language has a descendant of this proto-language word to indicate the (white) stork. Related names also occur in some Slavic languages,[examples needed] originating as Germanic loanwords.

According to the New Shorter Oxford English Dictionary, the Germanic root is probably related to the modern English "stark", in reference to the stiff or rigid posture of a European species, the white stork. A non-Germanic word linked to it may be Greek torgos ("vulture").

In some West Germanic languages cognate words of a different etymology exist, e.g. 'ooievaar' in Dutch. They originate from *uda-faro, uda being related to water meaning something like swamp or moist area and faro being related to fare; so *uda-faro is something like he who walks in the swamp. In later times this name got reanalysed as *ōdaboro, ōda "fortune, wealth" + boro "bearer" meaning he who brings wealth adding to the myth of storks as maintainers of welfare and bringers of children.

In Estonian, "stork" is toonekurg, which is derived from toonela (underworld in Estonian folklore) + kurg (crane). It may seem not to make sense to associate the now-common white stork with death, but at the times storks were named, the now-rare black stork was probably the more common species. 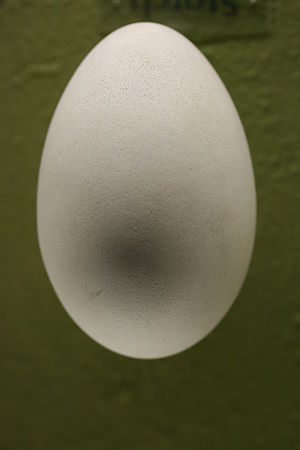 Egg of a Stork
See also: List of Ciconiiformes by population

The centres of stork diversity are in tropical Asia and sub-Saharan Africa, with eight and six breeding species respectively. Just three species are present in the New World: wood stork, maguari stork and jabiru, which is the largest flying bird of the Americas. Two species, white and black stork, reach Europe and western temperate Asia, while one species, Oriental stork, reaches temperate areas of eastern Asia, and one species, black-necked stork, is found in Australasia.[2]

Storks were distinct and possibly widespread by the Oligocene. Like most families of aquatic birds, storks seem to have arisen in the Palaeogene, maybe 40–50 million years ago (mya). For the fossil record of living genera, documented since the Middle Miocene (about 15 mya) at least in some cases, see the genus articles.

Though some storks are highly threatened, no species or subspecies are known to have gone extinct in historic times. A Ciconia bone found in a rock shelter on the island of Réunion was probably of a bird taken there as food by early settlers; no known account mentions the presence of storks on the Mascarene Islands.

The fossil genera Eociconia (Middle Eocene of China) and Ciconiopsis (Deseado Early Oligocene of Patagonia, Argentina) are often tentatively placed with this family. A "ciconiiform" fossil fragment from the Touro Passo Formation found at Arroio Touro Passo (Rio Grande do Sul, Brazil) might be of the living wood stork M. americana; it is at most of Late Pleistocene age, a few 10,000s of years.[8] 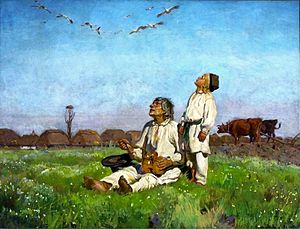 Due to its large size, predation on vermin, and nesting behaviour close to human settlements and on rooftops, the white stork has an imposing presence that has had an impact on human culture and folklore.[9] In Ancient Egypt, it was associated with, and was the hieroglyph for, the Ba, or "soul".[10] The Hebrew word for the white stork is chasidah (חסידה), meaning "merciful" or "kind".[11] Greek and Roman mythology portray storks as models of parental devotion, and it was believed that they did not die of old age, but flew to islands and took the appearance of humans. The bird is featured in at least three of Aesop's Fables: The Fox and the Stork, The Farmer and the Stork, and The Frogs Who Desired a King.[12] They were also thought to care for their aged parents, feeding them and even transporting them, and children's books depicted them as a model of filial values. A Greek law called Pelargonia, from the Ancient Greek word pelargos for stork, required citizens to take care of their aged parents.[13] The Greeks also held that killing a stork could be punished with death.[14] It was allegedly protected in Ancient Thessaly as it hunted snakes, and widely held to be Virgil's "white bird".[15] Roman writers noted the white stork's arrival in spring, which alerted farmers to plant their vines.[16]

Followers of Islam revered storks because they made an annual pilgrimage to Mecca on their migration.[17] Some of the earliest understanding on bird migration were initiated by an interest in white storks; Pfeilstörche ("arrow storks") were found in Europe with African arrows embedded in their bodies. A well-known example of such a stork found in the summer of 1822 in the German town of Klütz in Mecklenburg was made into a mounted taxidermy specimen, complete with the ornate African arrow, that is now in the University of Rostock.[18] 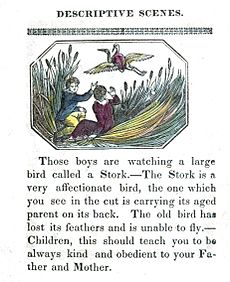 Supposed filial virtues of the stork[19]

Storks have little fear of humans if not disturbed, and often nest on buildings in Europe. In Germany, the presence of a nest on a house was believed to protect against fires. They were also protected because of the belief that their souls were human.[20] German and Dutch households would encourage storks to nest on houses, sometimes by constructing purpose-built high platforms, to bring good luck.[11] Poles, Lithuanians and Ukrainians believe that storks bring harmony to a family on whose property they nest.[21]

The white stork is a popular motif on postage stamps, and it is featured on more than 120 stamps issued by more than 60 stamp-issuing entities.[22] It is the national bird of Lithuania and Belarus,[23] and it was a Polish mascot at the Expo 2000 Fair in Hanover.[24] In the 19th century, storks were also thought to only live in countries having a republican form of government.[25] Polish poet Cyprian Kamil Norwid mentioned storks in his poem Moja piosnka (II) ("My Song (II)"):[26]

For the land where it's a great travesty

To harm a stork's nest in a pear tree,
For storks serve us all...

I am homesick, Lord!...
— translated by Walter Whipple

According to European folklore, the stork is responsible for bringing babies to new parents. The legend is very ancient, but was popularised by a 19th-century Hans Christian Andersen story called The Storks.[17] German folklore held that storks found babies in caves or marshes and brought them to households in a basket on their backs or held in their beaks. These caves contained adebarsteine or "stork stones". The babies would then be given to the mother or dropped down the chimney. Households would notify when they wanted children by placing sweets for the stork on the window sill.[11] From there the folklore has spread around the world to countries such as the Philippines and South America.[11] Birthmarks on the back of the head of newborn baby, nevus flammeus nuchae, are sometimes referred to as stork-bite.[27]

In Slavic mythology and religion, storks were thought to carry unborn souls from Iriy to Earth in spring and summer.[28] This belief still persists in the modern folk culture of many Slavic countries, in the simplified child story that "storks bring children into the world".[29] Storks were seen by the Slavs as bringing luck, and killing one would bring misfortune.[30] A long-term study that showed a spurious correlation between the numbers of stork nests and human births is widely used in the teaching of basic statistics as an example to highlight that correlation does not necessarily indicate causation.[31][32] The child-bringing myth has appeared in different forms in history. Children of African American slaves were sometimes told that white babies were brought by storks, while black babies were born from buzzard eggs.[33]

Psychoanalyst Marvin Margolis suggests the enduring nature of the stork fable of the newborn is linked to its addressing a psychological need, in that it allays the discomfort of discussing sex and procreation with children. Birds have long been associated with the maternal symbols from pagan goddesses such as Juno to the Holy Ghost, and the stork may have been chosen for its white plumage (depicting purity), size (in that it is big enough to carry an infant), and flight at high altitude (likened to flying between Earth and Heaven).[11] The fable and its relation to the internal world of the child have been discussed by Sigmund Freud,[11] and Carl Jung.[34] In fact, Jung recalled being told the story himself upon the birth of his own sister.[35] The traditional link with the newborn continues with their use in advertising for such products as nappies and birth announcements.[11]

There were negative aspects to stork folklore as well; a Polish folk tale relates how God made the stork's plumage white, while the Devil gave it black wings, imbuing it with both good and evil impulses. They were also associated with handicapped or stillborn babies in Germany, explained as the stork having dropped the baby en route to the household, or as revenge or punishment for past wrongdoing. A mother who was confined to bed around the time of childbirth was said to have been "bitten" by the stork.[11] In Denmark, storks were said to toss a nestling off the nest and then an egg in successive years.[11] In medieval England, storks were also associated with adultery, possibly inspired by their courtship rituals. Their preening and posture saw them linked with the attribute of self-conceit.[36]

Patrick Leigh Fermor describes a flock of storks migrating south across the Balkans in 1934 in his memoir published as The Broken Road.[37]