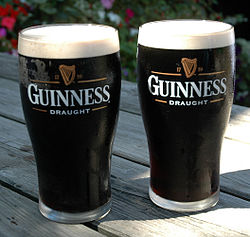 Guinness Draught, an example of an Irish dry stout

Stout is a dark beer made using roasted malt or roasted barley, hops, water and yeast. Stouts were traditionally the generic term for the strongest or stoutest porters, typically 7% or 8%, produced by a brewery.[1][2] There are a number of variations including Baltic porter, milk stout, and imperial stout; the most common variation is dry stout, exemplified by Guinness Draught, the world's best selling stout.[citation needed]

The first known use of the word stout for beer was in a document dated 1677 found in the Egerton Manuscript, the sense being that a stout beer was a strong beer not a dark beer.[3] The name porter was first used in 1721 to describe a dark brown beer that had been made with roasted malts. Because of the huge popularity of porters, brewers made them in a variety of strengths. The beers with higher gravities were called "stout porters", so the history and development of stout and porter are intertwined, and the term stout has since become firmly associated with dark beer, rather than just strong beer.[2][4]

Porter originated in London, England in the early 1720s.[5] The style quickly became popular in the City especially with porters (hence its name): it had a strong flavour, took longer to spoil than other beers, increased in alcohol content with age, was significantly cheaper than other beers, and was not easily affected by heat.[6][7] Within a few decades, porter breweries in London had grown "beyond any previously known scale".[7] Large volumes were exported to Ireland, where by 1776 it was being brewed by Arthur Guinness at his St. James's Gate Brewery.[8] In the 19th century, the beer gained its customary black colour through the use of black patent malt, and became stronger in flavour.[2] 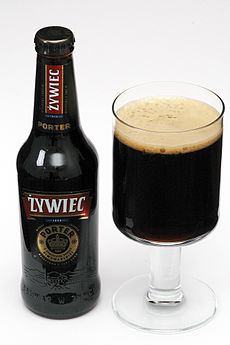 Originally, the adjective stout meant "proud" or "brave", but later, after the 14th century, it took on the connotation of "strong". The first known use of the word stout for beer was in a document dated 1677 found in the Egerton Manuscript,[3] the sense being that a stout beer was a strong beer. The expression stout porter was applied during the 18th century to strong versions of porter, and was used by Guinness of Ireland in 1820 – although Guinness had been brewing porters since about 1780, having originally been an ale brewer from its foundation in 1759. Stout still meant only "strong" and it could be related to any kind of beer, as long as it was strong: in the UK it was possible to find "stout pale ale", for example. Later, stout was eventually to be associated only with porter, becoming a synonym of dark beer.

Because of the huge popularity of porters, brewers made them in a variety of strengths. The beers with higher gravities were called "Stout Porters". There is still division and debate on whether stouts should be a separate style from porter. Usually the only deciding factor is strength.[9]

"Nourishing" and sweet "milk" stouts became popular in Great Britain in the years following the First World War, though their popularity declined towards the end of the 20th century, apart from pockets of local interest such as in Glasgow with Sweetheart Stout.

The slogan "Guinness is good for you" was thought up after market research in the 1920s suggested that people felt better after a pint, and post-operative patients, blood donors, pregnant women and nursing mothers in England were advised to drink Guinness.[10]

With beer writers such as Michael Jackson writing about stouts and porters in the 1970s, there has been a moderate interest in the global speciality beer market.

In the mid 1980s a survey by What’s Brewing found just 29 brewers in the UK and Channel Islands still making stout, most of them milk stouts.[11]

Milk stout (also called sweet stout or cream stout) is a stout containing lactose, a sugar derived from milk. Because lactose is unfermentable by beer yeast, it adds sweetness, body, and calories to the finished beer. Milk stout was claimed to be nutritious, and was given to nursing mothers,[12] along with other stouts, such as Guinness.[13] The classic surviving example of milk stout is Mackeson's,[14] for which the original brewers claimed that "each pint contains the energising carbohydrates of 10 ounces of pure dairy milk". In the period just after the Second World War when rationing was in place, the British government required brewers to remove the word "milk" from labels and adverts, and any imagery associated with milk.[15] 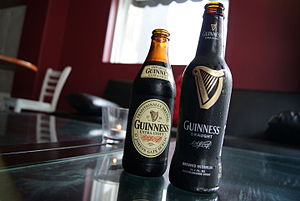 With milk or sweet stout becoming the dominant stout in the UK in the early 20th century, it was mainly in Ireland that the non-sweet or standard stout was being made. As standard stout has a dryer taste than the English and American sweet stouts, they came to be called dry stout or Irish stout to differentiate them from stouts with added lactose or oatmeal.[16][17][18] Though still sometimes termed Irish or dry stout, particularly if made in Ireland, this is the standard stout sold and would normally just be termed "stout".[19] The best selling stout is Guinness Draught, made by Diageo at St. James's Gate Brewery (also known as the Guinness Brewery) in Dublin;[20] it serves as the template for most modern stouts, including variations on Guinness Extra Stout, which tend to be around 5% abv, and Guinness Foreign Extra Stout, which tend to be around 7.5% abv.[21]

While there is a great deal of disagreement in the brewing world on this subject, there are no differences between stout and porter historically,[22] though there has been a tendency for breweries to differentiate the strengths of their dark beers with the words "extra", "double" and "stout". The term stout was initially used to indicate a stronger porter than other porters issued by an individual brewery. Though not consistent, this is the usage that was most commonly employed.[23] 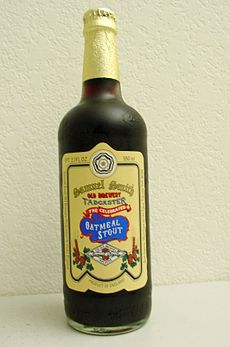 Oatmeal stout is a stout with a proportion of oats, normally a maximum of 30%, added during the brewing process. Even though a larger proportion of oats in beer can lead to a bitter or astringent taste,[24] during the medieval period in Europe, oats were a common ingredient in ale,[25] and proportions up to 35% were standard. Despite some areas of Europe, such as Norway, still clinging to the use of oats in brewing until the early part of the 20th century, the practice had largely died out by the 16th century, so much so that in 1513 Tudor sailors refused to drink oat beer offered to them because of the bitter flavour.[26][27]

There was a revival of interest in using oats during the end of the 19th century, when (supposedly) restorative, nourishing and invalid beers, such as the later milk stout, were popular, because of the association of porridge with health.[28] Maclay of Alloa produced an Original Oatmalt Stout in 1895 which used 70% "oatmalt", and a 63/- Oatmeal Stout in 1909, which used 30% "flaked (porridge) oats".[29]

In the 20th century many oatmeal stouts contained only a minimal amount of oats. For example, in 1936 Barclay Perkins Oatmeal Stout used only 0.5% oats.[30] As the oatmeal stout was parti-gyled with their porter and standard stout, these two also contained the same proportion of oats. (Parti-gyle brewing involves drawing off the first part of the mash and using it to make strong ale, then remashing the grain and drawing off the second runnings for a less strong variant.) The name seems to have been a marketing device more than anything else. In the 1920s and 1930s Whitbread's London Stout and Oatmeal Stout were identical, just packaged differently. The amount of oats Whitbread used was minimal, again around 0.5%.[31] With such a small quantity of oats used, it could have had little impact on the flavour or texture of these beers.

Many breweries were still brewing oatmeal stouts in the 1950s, for example Brickwoods in Portsmouth, Matthew Brown in Blackburn and Ushers in Trowbridge.[32] When Michael Jackson mentioned the defunct Eldrige Pope "Oat Malt Stout" in his 1977 book The World Guide to Beer, oatmeal stout was no longer being made anywhere, but Charles Finkel, founder of Merchant du Vin, was curious enough to commission Samuel Smith to produce a version.[33] Samuel Smith's Oatmeal Stout then became the template for other breweries' versions.

Oatmeal stouts do not usually taste specifically of oats. The smoothness of oatmeal stouts comes from the high content of proteins, lipids (includes fats and waxes), and gums imparted by the use of oats. The gums increase the viscosity and body adding to the sense of smoothness.[34]

Oysters have had a long association with stout. When stouts were emerging in the 18th century, oysters were a commonplace food often served in public houses and taverns. By the 20th century, oyster beds were in decline, and stout had given way to pale ale. The first known brewery to use oysters as part of the brewing process of stout was in 1938 by the Hammerton Brewery in London, UK. The brewery was re-established in 2014 and is once again brewing an Oyster Stout.

Modern oyster stouts may be made with a handful of oysters in the barrel, hence the claim of one establishment, the Porterhouse Brewery in Dublin, that their award-winning Oyster Stout was not suitable for vegetarians.[37] Others, such as Marston's Oyster Stout, use the name with the implication that the beer would be suitable for drinking with oysters. 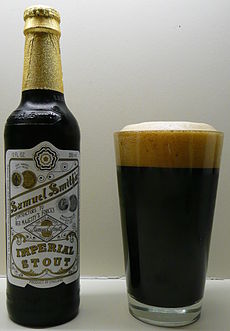 Imperial stout, also known as Russian imperial stout or imperial Russian stout, is a strong dark beer or stout in the style that was brewed in the 18th century by Thrale's brewery in London, England for export to the court of Catherine II of Russia.[38] In 1781 the brewery changed hands and the beer became known as Barclay Perkins Imperial Brown Stout. When the brewery was taken over by Courage the beer was renamed Courage Russian Imperial Stout (RIS).[39] It has a high alcohol content, usually over 9% abv.