From Infogalactic: the planetary knowledge core
Jump to: navigation, search
Not to be confused with Stow College.

Stowe School is an independent school in Stowe, Buckinghamshire. It was opened on 11 May 1923 by J. F. Roxburgh, initially with 99 schoolboys. It is a member of the Rugby Group and Headmasters' and Headmistresses' Conference. The school is also a member of the G20 Schools' Group. The headmaster, Dr Anthony Wallersteiner, was recognised as Tatler's Headmaster of the Year in 2007. The school was shortlisted for the 'most beautiful school' of the Year award in 2009 and was listed as outstanding in several categories by The Week magazine in 2013. The school is now educational and there are 550 boys and 220 girls.

The school has been based since its beginnings at Stowe House, formerly the country seat of the Dukes of Buckingham and Chandos. Along with many of the other buildings on the school's estate, the main house is now a Grade 1 Listed Building and is maintained by the Stowe House Preservation Trust.

The school's cricket ground is used as a first class ground by Northamptonshire CCC.

The Stowe Corner of Silverstone Circuit is named after the school.[1]

History of the Stowe School

Stowe School opened with its first 99 pupils, mainly aged 13, on 11 May 1923. There were two boarding Houses, Bruce and Temple, then both in the western part of the mansion. The following term Grenville and Chandos Houses were formed in the eastern wing, with Cobham and Grafton following soon afterwards as further parts of the house were converted into accommodation and classrooms. Chatham was the first purpose-built house, designed by the school’s first architect, Sir Clough Williams-Ellis. He had been instrumental in developing a vision for saving Stowe as a new centre of learning to match its crucial role in national culture and politics of the 18th Century. He had personally bought Stowe Avenue in 1922 before old Etonians presented it as birthday gift to the new School in 1924.[citation needed]

Helped by Harry Shaw, who had bought the estate the previous year, the new School succeeded in saving Stowe House and landscape gardens from demolition at their sale in October 1922. The School boasted a double foundation. Edward Montauban chaired the preparatory school committee seeking to found a new leading public school after the First World War and was the first to envisage the new school at Stowe. The finance came later through the Rev. Percy Warrington and the Martyrs Memorial Trust, giving rise to the group of Allied Schools.[citation needed] 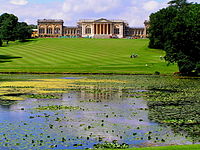 J.F. Roxburgh was Stowe’s founding Headmaster. His aim was to produce a modern public school concentrating on the individual, without the unpleasantness of fagging or arcane names then common in other schools. Instead he sought to instil a new ethos enthused with the beauty of Stowe’s unique environment where the best of traditional education would be tempered by liberal learning and every pupil would “know beauty when he sees it all his life”. Pupils and staff would relate in a civilized and open way, showing confidence and respect based on Christian values. Such was Roxburgh’s success in developing this vision that he was recognized as a formative figure in 20th Century English education, “greater than Arnold” in Gavin Maxwell’s words. [2]

Stowe’s early success led to its rapid expansion. Walpole House was added in 1934 and the School reached 500 pupils by 1935. The art school, sports pavilion, and staff housing date from this period too, when the Legal & General Company provided financial support during the recession. Stowe made rapid progress academically too; in 1939 Charles Graves commented in the Daily Mail that “nearly 60% of the boys go to Oxford or Cambridge, which is said to be a higher percentage than that of any other public school”. Teachers included T.H. White, author of The Once and Future King. Among sporting feats Old Stoic Bernard Gadney captained England’s rugby team to take the triple crown in 1936, while in the early 1930s Laddie Lucas and John Langley were both national boy golf champions while still in Grenville House, helped by the golf course originally laid out in 1924. Sir Robert Lorimer’s magnificent Chapel was opened in 1929 by Prince George, while in 1933, on the school’s 10th anniversary, the Prince of Wales launched the repair of the garden buildings with the restoration of the Queen’s Temple as a Music School.[citation needed]

There are 13 boarding houses: 8 boy houses, 4 girl houses and 1 mixed Sixth Form house. These boarding houses are mostly named after members of the family of Duke of Buckingham and Chandos. Each house has a number or letter assigned to it.

Former pupils of Stowe School are known as Old Stoics. Sir Richard Branson is currently the President of the Old Stoic Society. Old Stoics include:

The first recorded match on the school cricket ground came in 1928 when Stowe School played St Paul's School.[4] Buckinghamshire played their first Minor Counties Championship match there in 1947, when the opponents were Berkshire. Between 1947 and 1982 the ground held five Minor Counties Championship matches, the last of which saw Buckinghamshire draw against Bedfordshire.[5] The ground has also hosted a single MCCA Knockout Trophy match which saw Buckinghamshire play Bedfordshire.[6]

In the 2014 spoof documentary series The Life of Rock with Brian Pern and Brian Pern, a Life in Rock, Brian Pern and his fellow band members in the progressive rock group Thotch are depicted as having met at Stowe School.