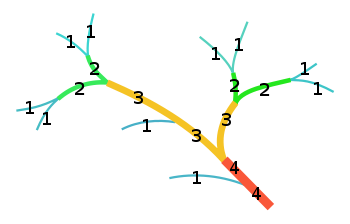 These numbers were first developed in hydrology by Robert E. Horton (1945) and Arthur Newell Strahler (1952, 1957); in this application, they are referred to as the Strahler stream order and are used to define stream size based on a hierarchy of tributaries. They also arise in the analysis of L-systems and of hierarchical biological structures such as (biological) trees and animal respiratory and circulatory systems, in register allocation for compilation of high-level programming languages and in the analysis of social networks. Alternative stream ordering systems have been developed by Shreve[1][2] and Hodgkinson et al.[3]

All trees in this context are directed graphs, oriented from the root towards the leaves; in other words, they are arborescences. The degree of a node in a tree is just its number of children. One may assign a Strahler number to all nodes of a tree, in bottom-up order, as follows:

The Strahler number of a tree is the number of its root node.

To qualify as a stream a hydrological feature must be either recurring or perennial. Recurring (or "intermittent") streams have water in the channel for at least part of the year. The index of a stream or river may range from 1 (a stream with no tributaries) to 12 (the most powerful river, the Amazon, at its mouth). The Ohio River is of order eight and the Mississippi River is of order 10. Estimates are that 80% of the streams on the planet are first to third order headwater streams.[7] 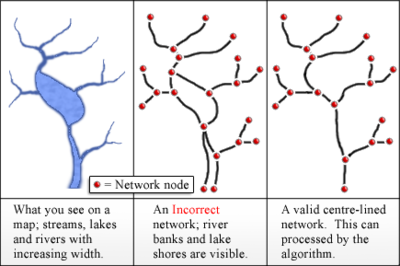 Gleyzer et al. (2004) describe how to compute Strahler stream order values in a GIS application. This algorithm is implemented by RivEX, an ESRI ArcGIS 10.2.1 tool. The input to their algorithm is a network of the centre lines of the bodies of water, represented as arcs (or edges) joined at nodes. Lake boundaries and river banks should not be used as arcs, as these will generally form a non-tree network with an incorrect topology.

The Strahler numbering may be applied in the statistical analysis of any hierarchical system, not just to rivers.

When translating a high-level programming language to assembly language the minimum number of registers required to evaluate an expression tree is exactly its Strahler number. In this context, the Strahler number may also be called the register number.[11]

For expression trees that require more registers than are available, the Sethi–Ullman algorithm may be used to translate an expression tree into a sequence of machine instructions that uses the registers as efficiently as possible, minimizing the number of times intermediate values are spilled from registers to main memory and the total number of instructions in the resulting compiled code.

where ni denotes the number of nodes with order i.

The pathwidth of an arbitrary undirected graph G may be defined as the smallest number w such that there exists an interval graph H containing G as a subgraph, with the largest clique in H having w + 1 vertices. For trees (viewed as undirected graphs by forgetting their orientation and root) the pathwidth differs from the Strahler number, but is closely related to it: in a tree with pathwidth w and Strahler number s, these two numbers are related by the inequalities[12]