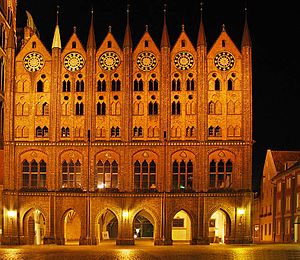 Main landmark of Stralsund: Its extraordinary Brick Gothic city hall from Hanseatic times. This building from 1278 features a remarkable 'show façade' that serves the sole purpose of displaying wealth of the city. Citizens can walk through the city hall and its gallery like they could walk any other street. The city hall also offers one of Europe's biggest Gothic cellar vaults.

Stralsund (German pronunciation: [ˈʃtʁaːlzʊnt]), is a Hanseatic town in Mecklenburg-Vorpommern, Germany. It is located at the Southern coast of the Strelasund (a sound of the Baltic Sea separating the island of Rugia from the mainland).[2]

The Strelasund Crossing with its two bridges and several ferry services connect Stralsund with Rugia.[2] The Western Pomeranian town is the capital of the Vorpommern-Rügen district since the 2011 district reforms.

It is the fourth largest city of Mecklenburg-Vorpommern, and together with Greifswald Stralsund forms an Oberzentrum, one of four high level urban centers of the region. It is favourably located within the metropolitan regions of Hamburg, Berlin, Copenhagen-Malmö and Stettin and the nearby regiopolis of Rostock.

Stralsund was founded in 1234 and was one of the most prospering members of the medieval Hanseatic League. Since 2002, Stralsund's old town with its rich heritage is honored as a UNESCO World Heritage, along with Wismar in Mecklenburg.

The main industries of Stralsund are shipyards, fishing, mechanical engineering, and, to an increasing degree, tourism, life sciences, services and high tech industries, especially IT (Information Technology) and biotechnology. 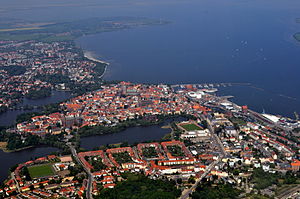 The town of Stralsund is located in Northeast Germany in the region of Western Pomerania in the state of Mecklenburg-Vorpommern. 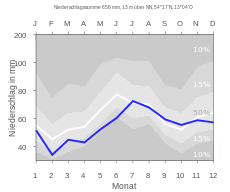 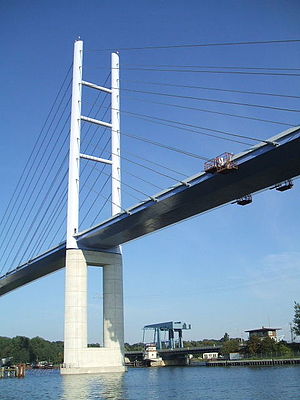 The town lies on the sound of Strelasund, a strait of the Baltic Sea. Its geographic proximity to the island of Rugia, whose only fixed link to the mainland, the Strelasund Crossing, runs between Stralsund and the village of Altefähr, has given Stralsund the sobriquet "Gateway to the Island of Rugia" (Tor zur Insel Rügen). Stralsund is located close to the Western Pomerania Lagoon Area National Park.

A municipal forest and three municipal ponds (the Knieperteich, Frankenteich and Moorteich) belong to the Stralsund's town borough . The three ponds and the Strelasund lend the Old Town, the original settlement site and historic centre of the town, a protected island location.

The highest point of the town is the Galgenberg ("Gallows Hill") on its western approaches.

The town's territory covers an area of 38.97 km², which makes Stralsund, with its 57,670 inhabitants (as at: 31 Dec 2010) one of the most densely populated towns in Mecklenburg-Western Pomerania (1,480 inhabitants per km²). Going out from the present town centre, the Old Town, the surrounding area was settled after the removal of the fortress nature of the town in 1869.

The borough of the Hanseatic town of Stralsund is divided into as follows:

The town also possesses estates in the local area as well as on the islands of Rugia, Hiddensee and Ummanz.

Larger towns or cities in the nearby area are Greifswald and Rostock. In the local area around Stralsund there are also the towns of Barth and Ribnitz-Damgarten.

Many of the smaller villages in the vicinity, like Prohn or Negast, have grown sharply after 1990 as a result of the influx of those living or working in Stralsund. 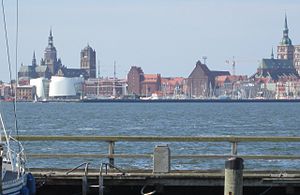 Stralsund seen from Altefähr. The old town island of Stralsund was awarded World Heritage status by UNESCO in 2002. It features many important historical buildings from different eras, even going back to Gothic times. 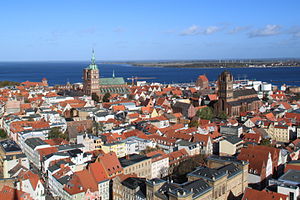 View over Stralsund from the tower of St. Mary's 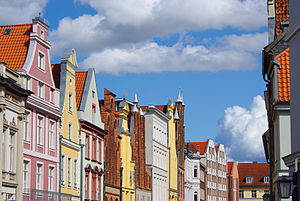 Typical street view of Stralsund: Patrician houses with high gables from different eras, including the remarkable Brick Gothic and renaissance.

In the Middle Ages, the Stralsund area was part of the West Slavic Principality of Rügen. At that time, the Dänholm isle and fishing village, both at the site of the latter town, were named Strale / Stralow, Polabian for "arrow" (this meaning is still preserved in the town's coat of arms, showing an arrow). The full Polabian name is Strzałów.[4]

The village also had a ferry to the island of Rugia.[5] In 1168, the Principality of Rügen became a part of Kingdom of Denmark.

In the course of German Ostsiedlung, many German settlers, gentry and merchants were called into the principality, and eventually populated the Strale settlement. Merchants from other countries as well as locals were attracted to the area and made up for one third of the town's population. The Danish navy used the isle as well. When the settlement had grown to town size, prince Wizlaw I of Rügen granted Lübeck law to "our town Stralow" in 1234, although a significant settlement had existed long before the formal founding.[5] In 1240, when the prince gave additional land to the town, he called it Stralesund.

The success of the settlement challenged the powerful Free City of Lübeck, which burnt Stralsund down in 1249. Afterwards the town was rebuilt with a massive town wall having 11 town gates and 30 watchtowers. The Neustadt, a town-like suburb, was merged to Stralsund by 1361. Schadegard, a twin town to Stralsund also founded by Wizlaw I nearby, but was not granted German law, served as the principal stronghold and enclosed a fort. It was given up and torn down by 1269 under the pressure of the Stralsund Bürger.

In 1293 Stralsund became a member of the Hanseatic League.[2] A total of 300 ships flying the flag of Stralsund cruised the Baltic Sea in the 14th century. In 1325, the Principality of Rügen became part of the Duchy of Pomerania, Stralsund however maintained a considerable independence.

In the 17th century, Stralsund became a theatre in the Thirty Years' War. In the Battle of Stralsund (1628), the town was besieged by Albrecht von Wallenstein after the council refused to accept the Capitulation of Franzburg.[6] Stralsund resisted with Danish and Swedish support.[6] The Swedish garrison in Stralsund was the first on German soil in history.[6] With the Treaty of Stettin (1630), the town became one of two major Swedish forts in the Duchy of Pomerania, besides Stettin (now Szczecin).[7]

After the war, the Peace of Westphalia (1648) and the Treaty of Stettin (1653) made Stralsund part of Swedish Pomerania. Lost to Brandenburg in the Battle of Stralsund (1678), it was restored to Sweden in the Treaty of Saint-Germain-en-Laye (1679). In the Great Northern War in 1715 Charles XII led the defence of Stralsund for a year against the united European armies. Stralsund remained under Swedish control until the Battle of Stralsund (1807), when it was seized by Napoleon Bonaparte's army. Seized by Ferdinand von Schill's freikorps in 1809, it was subsequently re-gained by France, with Schill killed in action. In the Congress of Vienna (1815), Stralsund became a part of the Prussian Province of Pomerania and the seat of a government region resembling the former Swedish Pomerania.

From 1949 until German Reunification in 1990, Stralsund was part of the German Democratic Republic. 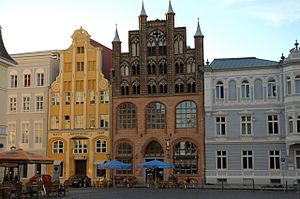 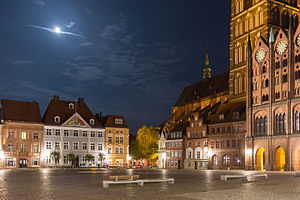 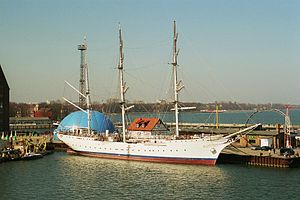 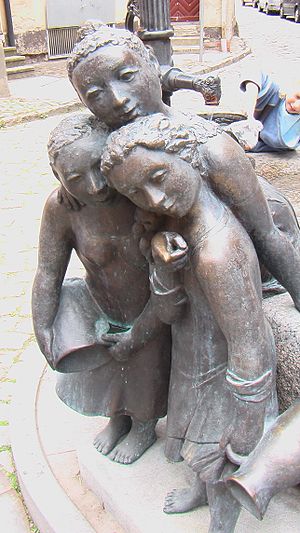 The centre of Stralsund has a wealth of historic buildings. Since 1990, large parts of the historic old town have been renovated with private and public capital, and with the support of foundations. As a result of the contempt for historic buildings in East Germany many houses were threatened by ruin. The Old Town in particular, offers a rich variety of historic buildings, with many former merchants' houses, churches, streets and squares. Of more than 800 listed buildings in Stralsund, more than 500 are designated as individual monuments in the Old Town. In twenty years, from the Wende in 1990 to November 2010, 588 of the more than 1,000 old buildings were completely refurbished, including 363 individual monuments.[9] Because of its historical and architectural significance, in 2002 Stralsund's old town together with the old town of Wismar were added to entitled the UNESCO World Cultural Heritage list as the "Historic Centres of Stralsund and Wismar".

The ensemble of buildings on the Old Market Square, including St. Nicholas' Church, the Town Hall, one of the most important secular buildings of North German Brick Gothic architecture, the Artushof, the Wulflamhaus, the Commandantenhus, the Gewerkschaftshaus and a new Plattenbau, an overview of the architectonic history of the town.

The town houses with their distinctive gables, often renovated at a high financial cost, dominate the scene in the streets of the Old Town. The former Swedish Government Palace is now home to the town construction department. The Museum of Cultural History Museum in Mönchstraße refurbished with funds from the German Foundation for Monument Conservation and now offers an experience and understanding of history over seven centuries as one of the most important surviving original houses of the Hanseatic era in Northern Europe.

Three big medieval Brick Gothic buildings – St. Mary's Church, St. Nicholas' Church and St. James' Church, point to the medieval significance of Stralsund. Today St. James' is used purely as a cultural church, its parish being served now by the Church of the Holy Spirit, used as a common church and also dating to the 14th century. The two other churches on the Old Market Square and Neuer Markt are still used for church services. From the tower of St. Mary's on Neuer Markt offers a panoramic view over Stralsund and the island of Rugia Island. Amongst the more recent church buildings are the Church of the Resurrection, Holy Trinity Church, Church of Peace and the Lutheran Church.

The Gothic abbey of St. Anne and St. Bridget (Kloster St. Annen und Brigitten) in Schillstraße was established around 1560 from the merger of the abby of St. Anne (1480) and the double abbey of Mariakron (1421).

The Abbey of St. Jürgen (Kloster St. Jürgen am Strande) on Mönchstraße was mentioned in 1278 for the first time. It served in the 14th century as an old people's home. In 1632 the church and building were demolished. In 1743 a new building, the Kleines St. Jürgen Kloster, was built at Kniepertor and the site was extended in 1754 to create old people's flats and in 1841 for widow's apartments.

First mentioned in 1256 as the Heilgeistkloster is the Hospital of the Holy Spirit. Poor and sick people were once looked after here. Today all flats and houses have been renovated, and the area is worth walking through.[10]

Ferries to Hiddensee and Altefähr, as well as harbour tour boats, dock at the port. In the summer months the port is a berthing places for river cruisers. There are several yacht harbours and marinas near the Old Town. Hundreds of yachts and boats tie up along the north mole in summer. Architectonically the pilot station and the harbour warehouse (Hafenspeicher) as well as the silhouette of the Old Town form an attractive contrast with the view of the islands of Rugia and Hiddensee. The barque, Gorch Fock is another tourist attraction in the harbour. 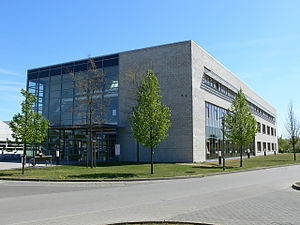 The Fachhochschule Stralsund is a University of Applied Sciences[11] with a modern campus, north of the old town at the Strelasund. It has around 2,500 students and is among the best ranked public universities in Germany in various fields, especially in economics.[12] Other university departments are Mechanical Engineering, Electrical Engineering and Information Technology. The FH Stralsund also offers international study programs, such as Leisure and Tourism Management[13] and Baltic Management Studies (international business management).[14]

Stralsund is linked to the A20 motorway (towards Berlin and Hamburg), via the B96n dual-carriageway. Other major roads include the B105 (beginning in the town centre and continuing to Rostock) and the B96 (major road to Rugia) and the B194 to the town of Grimmen.

Stralsund Hauptbahnhof is on the line to Berlin, Rostock, Pasewalk and Bergen.

When travelling by air, passengers usually do so via Rostock-Laage Airport with connecting flights from Munich. A small airport, Stralsund Barth Airport, is also serving the city nearby.

Stralsund is twinned with: