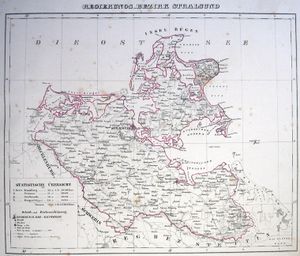 The Regierungsbezirk of Stralsund was formed in 1818 as one of three Pomeranian government districts. It covered Swedish Pomerania (New Hither Pomerania [aka New Western Pomerania] and Rügen) which had fallen to Prussia in 1815. The special legal position of this territory was the reason for the creation of what was then the smallest government region in the whole of Prussia. Unlike the rest of the Province of Pomerania, neither General Prussian State Law nor the laws and ordinances of the so-called Stein-Hardenberg reforms (such as the Local Government Act of 1808), as they were called at the time, applied here. An alignment of the legal position was only gradually achieved in the second half of the 19th century, and was largely completed on the introduction of the Civil Code (BGB) in January 1900. But in some areas, special legal forms continued to exist, a situation that was unlike anywhere else in Prussia and Germany and which even went back to the time of Swedish rule, for example, the so-called de (Tertialrecht). As a result, the de (Wismar Tribunal of Appeal), which moved from Wismar via Stralsund to Greifswald in 1802/03, still operated under this name when seated in Greifswald and continued as the final arbiter of proper jurisdiction for the region until 1848.

The first regional government was inaugurated on the 5 January 1818 by the upper president of the Province of Pomerania, de (Johann August Sack), in his office. This followed several years of discussion about the status of the region. That produced three options:

An appeal by the districts and towns to the king against the formation of the government region was dismissed. However, the Prussian system of taxation was only introduced in New Hither Pomerania following a royal cabinet order of 19 November 1821.[1]

Because of its small size the Region of Stralsund was one of those Prussian government regions which was up for re-negotiation from the outset. Only a few years after its formation there were further discussions about its future. In the end it was its aforementioned special legal status that prevented its dissolution time and again. Not until 1 October 1932 was it merged in the Stettin Region.

Administrative divisions in the mid-19th century

The Stralsund government region is divided into four counties, three of which take their name from the towns in which the district councils are located. The fourth, however, takes its name after the island of Rügen, of which it is composed alone. New Hither Pomerania has three districts: Franzburg (Franzburg (district)), Greifswald (Greifswald (district)), Grimmen (Grimmen (district)). Rügen forms the district of Rügen.

In ecclesiastical terms the government region is divided into eleven superintendencies, of which three cover the Franzburg district, two the Grimmen district, three the Greifswald district and three the island of Rügen.

All parishes are Protestant.[2] Only in Stralsund is there a Catholic church, to which all Catholics in the government region belong.[3]

Population growth in the 19th century

In 1900 the Region of Stralsund comprised one urban (Stadtkreis) and four rural districts (Kreise). It covered an area of 4,010.88 km², on which there were 873 towns and villages and in which 216,340 inhabitants lived.

In 1925 the seat of the council for the Franzburg district was moved to Barth. From 1 February 1928 the district was officially renamed "Franzburg-Barth". In 1939 all rural districts in Germany were uniformly termed as Landkreis (i.e. rural district), whereas before in Prussia the term Kreis prevailed. However, this played no role for the Stralsund Region which was already absorbed in 1932.