The Natural Step is a non-profit organization founded in Sweden in 1989 by scientist Karl-Henrik Robèrt. Following publication of the Brundtland Report in 1987, Robèrt developed The Natural Step framework, setting out the system conditions for the sustainability of human activities on Earth; Robèrt's four system conditions are derived from a scientific structured understanding of the socio-ecological system, including the laws of thermodynamics and social studies.

The Natural Step has also pioneered a "Backcasting from Principles" approach meant to advance society towards greater sustainability.[1] The systems thinking and backcasting from sustainability principles form the basis for numerous applications and tools to plan and (re-)design organizational strategy, organizational processes, product/service innovation and business models.

Currently The Natural Step has offices in 11 countries and numerous associates and ambassadors around the world. The Natural Step's Theory of Change is at the core of its activities and is the breeding ground for individual, organizational and multi-stakeholder programs like Adding Sustainable Value and Sustainability Transition Labs. 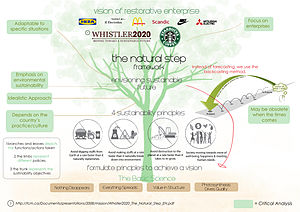 Sustainability essentially means preserving life on Earth, including human civilization; meeting human needs is thus vital in creating a sustainable society. Meeting fundamental human needs (Manfred Max-Neef) is essential. However, the way we go about satisfying those individual needs is a root cause of many of the challenges we face today. It follows that one of The Natural Step's principles of sustainability is to avoid subjecting people to conditions which undermine their capacity to meet their own needs.

The other three principles focus on interactions between humans and the planet. They are based in science and supported by the analysis that ecosystem functions and processes are altered in the following ways:

The 5 Level Framework (5LF) is a comprehensive model for planning and decision making in complex systems based on whole systems thinking. It comprises 5 levels: 1) System, 2) Success, 3) Strategic, 4) Actions and 5) Tools. It can be used to analyze any complex system of any type or scale (e.g. human body, the game of chess or soccer, an organization, a sustainability concept) and helps to plan, decide and act strategically towards success based on principles determined by the working of the system (e.g. treat cancer, win chess or soccer, manage a successful business, design useful tools).

When the 5LF is applied to the socio-ecological system (or society within the biosphere) it is called the Framework for Strategic Sustainable Development (FSSD) and is also known as The Natural Step Framework. As a framework it helps to see the BIG picture of the workings and functions of our ecological and social systems and institutions, current trends and our sustainability challenge, how we as a society negatively influence the functioning of the socio-ecological system (System), what systems conditions should be met for it to not to be negatively influenced (Success) and how to strategically plan towards that (Strategic) with prioritized actions (Actions) selecting (or designing) and applying the appropriate tools for those (Tools).

To explain the challenge the metaphor of a funnel is used. The walls closing in represent the many (systematic and often exponentially increasing) trends of e.g.; decreasing number and quality of natural resources and ecosystems, the stricter laws and regulations, degrading interpersonal and person-to-person trust, increasing toxicity levels, growing human population, increase in demands for resources, etc. The walls of the funnel are getting closer and closer over time limiting the room to maneuver. Individuals, organizations and society are hitting the walls of the funnel over time e.g.: victims of climate change related weather events, depleting fish stocks, increased number of cancer occurrences, air/water/soil pollution, decreasing trust, bankruptcies due to price increases, fines, stricter regulations, etc.

Overview of the science - Systems functions

Behind the framework there is a science based understanding of the dynamic interrelationships within and between socio-ecological sub-systems and is based (a.o.) on study of ecosystems, laws of nature (including thermodynamics, conservation laws, laws of gravity, biogeochemical cycles, photosynthesis, systems thinking, flows of resources and wastes), social systems, social institutions (including trust and fundamental human needs), psychology.

In order to be able to create a structured overview and not to be confused with more downstream or detailed information only the logic of the concepts are explained here.

The First and Second Laws of Thermodynamics (LoTD) and Laws for conservation of matter (LCoM) set limiting conditions for life on earth: The First Law says that energy is conserved; nothing disappears, its form simply changes (e.g. heat, movement). Another way of stating this is: "Energy cannot be created, or destroyed, only modified in form." The implications of the Second Law and second law of conservation of matter, are that matter and energy tend to disperse over time. For matter this is referred to as "entropy." Putting the different laws together and applying them to our planetary system, the following facts become apparent:

Trust is what binds society (economically, politically, socially). Individual fundamental human needs need to be met (as articulated by Manfred Max-Neef, among others).

Previously these were called system conditions to be met to not to degrade the socio-ecological system.

In 1989, Robèrt wrote a paper describing the system conditions for sustainability, given these laws of nature amongst others. He sent it to 50 scientists, asking that they tell him what was wrong with his paper. On version 22, Robèrt had scientific consensus on what was to become The Natural Step Framework.[2] Since then there have been 2 more rounds of scientific consensus on the Framework, one was initiated by Paul Hawken in the USA (1994), one took place in Australia. Since the initial version several changes to the wording of the principles have been made (2006).

The negative wording is often debated as the use of 'not' can have a negative emotional connotation. As in a game with game rules, it doesn't tell you everything you should do, they leave that up to the imagination of the players, they allow you to do anything as long as it is within all agreed rules of the game. The restrictions set by these 'rules of the game' stimulate creativity as they are applied in personal, professional or community planning and decision-making. On the success level organizations, institutes and individuals add their own (secondary) principles of success based on their specific context or needs.

The framework bases its planning approach on the concept called backcasting from principles. Backcasting is the process of moving backwards from an imagined vision of success. One begins with an end in mind, moves backwards from the vision to the present, and moves step-by-step towards the vision. It is essentially placing ourselves in the future, imagining that we have achieved success and looking back to ask the question: “What do we need to do today to reach that successful outcome?”.[4]

Different general strategies can be applied to reach success based on a general understanding of the system:

The actions that you can do within the strategy to reach success within the system e.g. Raise awareness on specific sustainability topics, education programs on what sustainability is and how it could be approached, selecting different suppliers based on sustainability criteria, designing or implementing policies, analyze the life cycle of a product, create a sustainability report, facilitate a dialogue with specific stakeholders around a particular challenge, etc.

A variety of tools and concepts can be supportive when addressing sustainability. Informed by the framework and priorities of actions can help to select and implement the appropriate tools. Tools can then be optimally used: for the purpose they were designed to do together with other complimentary tools.

The ABCD method is the approach with which the framework backcasting from the 4 sustainability principles can be applied to an organization. The letters represent the following steps (FSSD academic ABCD and TNS ABCD method differ slightly):

A: Awareness and visioning. After understanding the system your organization works within and the principles, members of the organization create a vision on how they would like the organization to be. Organisations should also identify the service they provide, independent of the product, sparking more creative goals.

B: Baseline mapping. The organisation analyzes what it has been doing currently and evaluates it based on the 4 principles. It allows for the organisation to identify critical issues, implications and opportunities.

C: Creative solutions. Members of the organisation brainstorm for solutions to the issues raised previously, without constraint. With the vision and potential actions, organisations backcast to develop strategies for sustainability.

D: Decide on priorities. The organisation prioritizes the different actions developed previously that help gear it to sustainability in the fastest and most optimal way, by asking a set of questions: by asking: i) Does this action move us in the right direction? ii) Can this action be built upon in future? iii) Does this action bring an acceptable financial, ecological and/or social return on investment?.[5] This step involves step-by-step implementation and planning.

Backcasting is continually used to assess and evaluate the actions, to determine if the organisation is moving towards the vision set in 'A'.[6]

Interfaces with other tools and concepts

Applications of the Framework

The framework is applicable to organisations (of any sector, size, location), processes, products, services, business models. It can be used to analyze other sustainability tools and concepts and strengthens other tools by placing them in the context and focus on what they are designed to do.

In an article in In Context (1991), Robèrt described how The Natural Step Framework would create change:

Next to British Columbia, Canada also corporations such as Interface, Nike, Inc., ICI Paints, Scandic Hotels, Max Hamburgers, and IKEA have adopted the framework and have become more sustainable as a result. Each of these companies have completely re-thought their business and have examined and changed all their processes including purchase of materials, manufacturing, transportation, construction of facilities, maintenance and waste management.[9] The Natural Step was introduced to the Northwest through three one-day conferences introduced by Northwest Earth Institute. The Natural Step's framework for sustainability provides principles that are grounded in science, and thus measurable.