From Infogalactic: the planetary knowledge core
Jump to: navigation, search
For the Genus of beetles, see Strategus (genus).
For the board game, see Stratego. 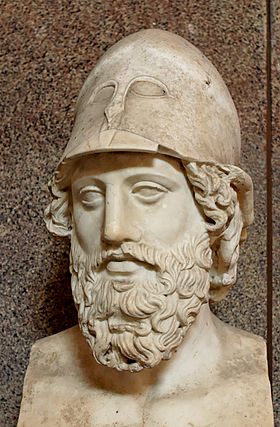 Bust of unnamed strategos with Corinthian helmet; Hadrianic Roman copy of a Greek sculpture of c. 400 BC

Strategos, plural strategoi, (Greek: στρατηγός, pl. στρατηγοί; Doric Greek: στραταγός, stratagos; literally meaning "army leader") is used in Greek to mean military general. In the Hellenistic world and the Byzantine Empire the term was also used to describe a military governor. In the modern Hellenic Army it is the highest officer rank.

The office of Strategos in Classical Greece

Themistocles, Aristides and Cimon were early examples of strategoi who were politicians as well as generals. Pericles was a strategos very often throughout his career; from 443 until 429 BC. Cleon, Nicias and Alcibiades were also strategoi. But at the end of the 5th century, with the collapse of the military power of Athens, and later because of an increasing tendency to specialization, military office ceased to be a means of acquiring political influence.

Little is known of the number and method of appointment of Athenian strategoi in the 6th century, but in 501 BC, a new arrangement was introduced by which ten strategoi were elected annually, one from each phyle. The ten were of equal status: at Marathon in 490 (according to Herodotus) they decided strategy by majority vote, and each held the presidency in daily rotation. At this date the polemarchos had a casting vote, and one view is that he was the commander-in-chief; but from 486 onwards the polemarch, like other archontes, was appointed by lot.

The annual election of the strategoi was held in the spring, and their term of office coincided with the ordinary Athenian year, from midsummer to midsummer. If a strategos died or was dismissed from office, a by-election might be held to replace him. Strategoi commanded both from land and by sea. A particular military or naval expedition might have one strategos or several in command; rarely did all ten go together.

At home the strategoi were responsible for calling up citizens and metics for military service, and for organizing the maintenance and command of ships by the system of trierarchies. When a legal case arose from any of these matters, such as a prosecution for desertion or evasion of service, or a dispute over the duty to perform a trierarchy, the strategoi were the magistrates responsible for bringing the case to court and presiding over the trial.

The Athenian people kept a close eye on their strategoi. Like other magistrates, at the end of their term of office they were subject to euthyna and in addition there was a vote in the ekklesia during every prytany on the question whether they were performing their duties well. If the vote went against anyone, he was deposed and as a rule tried by jury. Pericles himself in 430 was removed from office as strategos and fined, and in 406 the eight strategoi who commanded the fleet at the battle of Arginusae were all removed from office and condemned to death.

These arrangements illustrate one of the most striking features of Athenian democracy: reluctance to give power to individuals and fear that it might be abused.

Hellenistic and Roman use

Philip II of Macedon was elected as strategos autokrator (commander-in-chief with full powers) in the League of Corinth. Parmenion the Macedonian general also had the title of strategos.

In the Hellenistic empires of the Diadochi, notably Lagid Egypt, strategos became a gubernatorial office. In Egypt, a strategos presided over each of the country's nomes. In Egypt, the unique office and title of epistrategos (ἐπιστράτηγος, "over-general") was created in the early 2nd century BC, which survived intact into the Roman Empire. Two such existed, one for the Chora (Lower Egypt except for Alexandria) and one for the Thebaid, acting as viceroys controlling the subordinate strategoi of the nomes.

Under the Roman Republic and later through the Principate, Greek historians often used the term strategos when referring to the Roman political/military office of praetor. Such a use can be found in the New Testament: Acts 16:20 refers to the magistrates of Philippi as strategoi (στρατηγοί).[1] Correspondingly, antistrategos ("vice-general") was used to refer to the office of propraetor.

The Odrysian kingdom of Thrace was also divided into strategiai ("generalships"), each headed by a strategos, based on the various Thracian tribes and subtribes. At the time of the kingdom's annexation into the Roman Empire in 46 AD, there were 50 such districts, which were initially retained in the new Roman province, and only gradually fell out of use. It was not until ca. 136 that the last of them were abolished.

The term continued in use in the Greek-speaking Byzantine Empire. Initially, the term was used along with stratelates and, less often, stratopedarches, to render the supreme military office of magister militum (the general in command of a field army), but could also be employed for the regional duces. In the 7th century, with the creation of the Theme system, their role changed: as the field armies were resettled and became the basis for the territorial themes, their generals too assumed new responsibilities, combining their military duties with the civil governance of the theme.[2] The first themes were few and very large, and in the 8th century, the provincial strategoi were in constant antagonism with the emperor at Constantinople, rising often in rebellion against him. In response, the themes were progressively split up and the number of strategoi increased, diluting their power. This process was furthered by the conquests of the 10th century, which saw the establishment of several new and smaller frontier themes: while in ca. 842 the Taktikon Uspensky lists 18 strategoi, the Escorial Taktikon, written ca. 971–975, lists almost 90.[2]

Throughout the middle Byzantine period (7th–12th centuries), the strategos of the Anatolic theme enjoyed precedence over the others and constituted one of the highest offices of the state, and one of the few from which eunuchs were specifically barred. At the same time, the Eastern (Anatolian) themes were senior to the Western (European) ones. This distinction was especially marked in the pay of their presiding strategoi: while those of the Eastern themes received their salary directly from the state treasury, their counterparts in the West had to raise their—markedly lower—pay from the proceeds of their provinces.[3] During the 11th century, the strategoi were gradually confined to their military duties, their fiscal and administrative responsibilities being taken over by the civil kritai ("judges"). Senior military leadership also devolved on the hands of a new class of officers titled doukes or katepano, who were placed in control of regional commands combining several themes. By the 13th century, the term strategos had reverted to the generic sense of "general", devoid of any specific technical meaning.[2]

The insignia of a full Stratigós of the Hellenic Army.

In the modern Hellenic Army, a stratigós (the spelling remains στρατηγός) is the highest officer rank. The superior rank of stratárchis (Field Marshal) existed under the monarchy, but has not been retained by the current Third Hellenic Republic. Under the monarchy, the rank of full stratigós in active service was reserved for the King and a few other members of the royal family, with very few retired career officers promoted to the rank as an honorary rank. In 1947, Alexander Papagos became the first career officer to hold the rank in active service. Since ca. 1970, the rank is held in active service by the Chief of the General Staff of National Defence, when he is an Army officer, and is granted to the retiring Chief of the Hellenic Army General Staff.

All but one of the other Greek general officer ranks are derivations of this word: antistrátigos and ypostrátigos, for Lieutenant General and Major General, respectively. A Brigadier General however is called taxíarchos, after a táxis (in modern usage taxiarchía), which means brigade. The ranks of antistrátigos and ypostrátigos are also used by the Hellenic Police (and the Greek Gendarmerie before), the Greek Fire Service and the Cypriot National Guard, which lack the grade of full stratigós.

This position was featured in Orson Scott Card's novel Ender's Game. In the novel, the position of Strategos was charged with overall command of solar system defense. The Strategos, along with the positions of Polemarch (responsible for the International Fleet of space warships), and the Hegemon (the political leader of Earth, rather like a stronger version of the Secretary-General of the United Nations), was one of the three most powerful people alive. During an earlier war described in the novel, because of a belief in their inherent luck and brilliance—specifically, that no Jewish general had ever lost a war—all three positions were filled with Jewish people: an American Jew as Hegemon, an Israeli Jew as Strategos, and a Russian Jew as Polemarch. The defeat of the Formics by half-Māori Mazer Rackham changed this position. Bean (Julian Delphiki) was given the title of Strategos by Peter Wiggin after he assumed the role of Hegemon. The prequel novel Earth Awakens establishes that the position of Strategos was named after the Strategoi, a group of international military commanders in charge of the Mobile Operations Police, which served as the model for the newly created International Fleet. The first Strategos was Lieutenant Colonel Yulian Robinov of the Russian Ministry of Defense, who served as the chair of the Strategoi during the First Invasion.

The dystopian slave-empire of the Draka, in the series of books by S. M. Stirling, also uses "Strategos" together with many other military ranks and terms drawn from Classical Antiquity, though often with only the loosest resemblance to what they originally meant.

The position of 'Strategos' was also featured in the English-language version of the Sunrise anime The Vision of Escaflowne; the character Folken occupied the position when he served the Zaibach empire.

The oldest use of the term strategos in fiction may be found in the "Callirhoe" of Chariton of Aphrodisias which is dated in the first century A.D. There, Hermocrates is the "strategos" of Syracuse and the father of Callirhoe, living in the 5th century B.C. In fact, he was a historical person, the victor over the Athenians in 413 B.C., an event which stopped Athenian expansion to the West. His role as a character in the novel is rather limited. Although his position in Syracuse gives Callirhoe a background, and he gives consent to her marriage and fulfills a few official duties, his legal or constitutional position is not very clear.