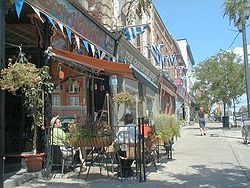 Ontario Street in the summertime.

Stratford is a city on the Avon River in Perth County in southwestern Ontario, Canada, with a population of 30,886[1] as of 2011.

When the area was first settled by Europeans in 1832, the townsite and the river were named after Stratford-upon-Avon, England. It is the seat of Perth County. Stratford was incorporated as a town in 1859 and as a city in 1886.[4] The first mayor was John Corry Wilson Daly and the current mayor is Dan Mathieson. The swan has become a symbol of the city. Each year twenty-four white swans are released into the Avon River. The town is well known for being the home of the Stratford Shakespeare Festival.

The town was originally a railway junction. Furniture manufacturing became an important part of the local economy by the twentieth century. In 1933 a general strike, started by the furniture workers and led by the Communist Workers' Unity League, marked the last time the army was deployed to break a strike in Canada.[4]

The city's economy took a major turn when the Stratford Shakespeare Festival started in 1953. Mayor David Simpson approved the project pitched by Tom Patterson while at the convention of the Canadian chapter of the American Waterworks Association in Winnipeg May 1951. The annual festival now brings hundreds of thousands of theatre goers and tourists to the area. Celebrities such as Alec Guinness, Christopher Plummer, Olivia McLean, Dame Maggie Smith, and William Shatner have performed at the festival. The Canadian novelist and playwright Timothy Findley performed in the first season, and had an ongoing relationship with the festival, eventually moving to Stratford in 1997.

The world-renowned festival takes place in four theatres throughout the city: the Festival Theatre, the Avon Theatre, Tom Patterson Theatre and the Studio Theatre.

Historically, the city was a railway junction. Today Canadian National Railway, and the Goderich-Exeter Railway provide freight links, and Via Rail Canada is the passenger carrier.[8] Via's rail service in Stratford is based from the Stratford railway station, and is situated on the Toronto-Sarnia segment of the Québec City-Windsor Corridor; Via serves Stratford with four trains daily (two eastbound to Toronto Union Station, one westbound to Sarnia via London, and one westbound terminating at London).[9] Whilst not on the 400-series highway, it is at the junctions of Highways 7 (Ontario St.), 8 (Huron St.), and former 19 (Now Perth Road 119, Mornington St.) and is connected to Highway 401 by expressways from Kitchener. Greyhound Canada provided daily service between London and Kitchener but the route was cancelled as of July 2011.[10] The owners of Cherrey Bus Lines, Robin Hood Tours provides chartered bus service from Stratford to locations as far as Kincardine and Wingham.[11] Within the city, Stratford Transit provides the local bus service, running every half hour six days a week.[12] The Stratford Municipal Airport (CYSA) is located just north of the city.

This memorial, erected by the city of Stratford, is dedicated to the memory of the war dead of the First and Second World Wars and the Korean War.[13] The Stratford War Memorial was gifted by Mr. Walter B. Allward, of Toronto. The base is granite and the figures bronze. The total width runs eighteen feet, and the total height sixteen, the figures are eight feet high. The tall figure on the high ground expresses the better, the spiritual man, while going down into the valley is the disarmed figure of strife, the group showing the supremacy of right over brute force. On the face of the centre base are the words: "They Broke the Sword and Brought Peace to my Land." On the Slide base is inscribed the names of Stratford's war dead. The memorial was placed at the end of Erie Street, where it joins Ontario Street.[14]

Stratford is home of the OHA Midwestern Junior B hockey team, the Stratford Cullitons. The Cullitons have produced notable NHL players such as Ed Olczyk, Craig Hartsburg, Garth Snow, Rob Blake, Chris Pronger, Nelson Emerson, Tim Taylor, Greg de Vries, Jeff Halpern, Rem Murray and Boyd Devereaux and won several Sutherland Cup championships.[15] Stratford hosted Tim Hortons Hockey Day in Canada on January 30, 2010.[16] Stratford used to also have an Intercounty Baseball League Team called the Stratford Nationals, and a soccer team in the Kitchener and District Soccer League. House League sports are also available in the Stratford area. There is the Stratford Rotary Hockey League, Hoops For Fun Basketball, Stratford Minor Baseball, the Stratford Soccer House League and the Stratford Dragon Boat Club. Stratford is also home to the Black Swans rugby club. The Chess Federation of Canada has its administrative office in Stratford. Stratford is also well known for its local swans, in 2013 it had 22 white swans and 1 black swan. Every year, the swans are marched to the river with an accompanying bagpipe band.[17]

The Stratford Summer Music Festival has been held for seven seasons and features indoor and outdoor performances by international, classical, and world music artists as well as young Canadian performers around downtown Stratford.[18]

The Stratford Concert Band, a local wind ensemble, traces its history back to the GTR Employees Band, later named the CNR Employees' Band formed in 1907 by James Malone.[19] 2007 marked their 100th anniversary performing in Stratford and they celebrated with a gala concert and reception in May. The band performs free outdoor concerts at the Kiwanis Pavilion Bandshell in Upper Queen's Park Wednesday and Sunday evenings from June until September.

Notable musicians with a local connection include Justin Bieber, Loreena McKennitt (who now makes Stratford her home), Richard Manuel of The Band, Dayna Manning, Graham Van Pelt of Miracle Fortress, Darren Dumas of The Salads Ali Matthews/Rick Francis, John Till, who backed Janis Joplin, and Ken Kalmusky, who played with Ian & Sylvia's Great Speckled Bird. During their early careers, Manuel, Till and Kalmusky were members of the Stratford group, The Revols, and later became members of Ronnie Hawkins' backing group, The Hawks. Ken Kalmusky's son David Kalmusky, is a Juno awarded, multiple gold selling, Grammy nominated producer, mixer and musician. Several international operatic singers reside in Stratford such as Baritone, James Westman, and Tenor, Roger Honeywell. In 2004, the city of Stratford presented Richard Manuel of The Band with a sidewalk star[20] in the busy tourist section of Ontario Street. There is also a memorial bench seated next to the Avon River dedicated in his honor.

Stratford maintains manufacturing, tourism, commercial, financial and service industries, supporting a diverse economy. The top two sectors of the economy being tourism and manufacturing.[23] The annual Shakespeare Festival is a large contributor to the Stratford economy.

The city's three secondary schools are:

both part of the Avon Maitland District School Board, and

Stratford is also home to the Stratford Chef School.

September 2010 marked the official opening of the Stratford campus.[24] The University of Waterloo’s Stratford Campus offers undergraduate, graduate and advanced education programs and research opportunities. It is a forward-looking research, education and convergence centre that will drive the next generation of digital media applications and content models. Using a collaborative education style, the campus will bring students, leading researchers, businesses and entrepreneurs together to create, examine and commercialize opportunities in the digital media space. It is envisioned to quickly become a centrepiece for collaboration, learning and sharing through conferences and workshops.[25]

In June 2009, the University of Waterloo Stratford Campus and the Canadian Digital Media Network (CDMN) hosted the Canada 3.0 forum in Stratford to map Canada’s digital future and create opportunities for new business and jobs. In May 2010, the second Canada 3.0 was held in Stratford again.

Stratford has been internationally recognized as a digital technology centre and a "smart city". For the past three years Stratford has placed in the Top 7 Intelligent Communities for 2011.[26] In 2013 Stratford was beat out by Taichung City, Taiwan, which has a population of over 2.3 million people. Each of the Top 7 Communities recognized by the Intelligent Community Forum "exemplifies best practices in broadband deployment and use, workforce development, innovation, digital inclusion and advocacy that offer lessons to regions, cities, towns and villages around the world".[27] Stratford was being considered a "smart city" for the introduction of citywide Wi-Fi in 2010,[28] the opening of the University of Waterloo Stratford Campus, which specializes, in digital media and information technology, and as the home of the technology forum Canada 3.0 and various technology companies.

Notable past and present residents 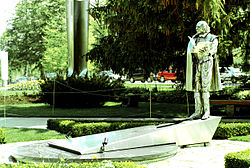 Notable residents that have lived in Stratford include singers Justin Bieber, Loreena McKennitt, and Richard Manuel; classical singer James Westman; actors Shawn Roberts and Joe Dinicol, and author R. J. Anderson. Canadian news anchors Lloyd Robertson and Tony Parsons both got their start in broadcasting at local radio station CJCS, Robertson in 1952 and Parsons in 1957. CBC news anchor Peter Mansbridge and his wife Cynthia Dale currently live in Stratford, as does actor Colm Feore. Stratford is often credited as the home of hockey star Howie Morenz, who was actually from nearby Mitchell. The northern block of Nile Street, between Lakeside Drive and Water Street (on which the Allman Arena is situated) was renamed to Morenz Drive in his honour. William D. Connor, Lieutenant Governor of Wisconsin from 1907–1909, grandfather of former Congressman and Secretary of Defense Melvin R. Laird, and great-grandfather of Jessica Laird Doyle, wife of Governor James Doyle of Wisconsin, was born near Stratford on a farm.[29]

Thomas Edison briefly worked as a telegraph operator for the Grand Trunk Railway at Stratford's railway station. John Davis Barnett was an Assistant Mechanical Superintendent of the Grand Trunk Railroad and Mechanical Superintendent of the Midland Railway and librarian; later in life becoming a collector donating to the University of Western Ontario. The assistant architect of the United States Capitol, Michael G. Turnbull, was born in Stratford and lived there until the age of eleven, when his family emigrated to the United States. Dr. Norman Bethune made Stratford his temporary home in the early part of 1917.[30] He worked as a physician at the home/office on Albert Street that was occupied by Dr. Lorne Robertson in the 1930s (now demolished). The two cast iron dogs from this residence now stand outside the entrance to Queen's Park at the north end of Parkview Drive. His sister Janet and her husband Thomas Stiles were host to Norman and his new wife Frances in 1924, when they stayed at Janet's home (at 335 Cobourg Street) for several months. Dr. Robert B. Salter was born in Stratford. The first woman to be elected member of the House of Commons of Canada, Agnes Macphail, attended teachers college in Stratford[31]

Stratford is a member of the Stratford Sister Cities program which was created to promote friendship and cultural exchange between participating countries. Participation is restricted to places called "Stratford" that have a Shakespeare Theatre or Festival. A reunion is held every second year by a different member.[32]

The five principal sister cities of Stratford, Ontario are: