The Festival's primary mandate is to present productions of William Shakespeare's plays, but it also produces a wide variety of theatre from Greek tragedy to contemporary works. Shakespeare's work typically represents about a third of the Festival's offerings.

The success of the festival dramatically changed the image of Stratford into one of a city where the arts and tourism play important roles in its economy. The festival attracts many tourists from outside Canada, mainly those British and American, and is seen as a very important part of Stratford's tourism sector.

Alec Guinness and Irene Worth were within the cast of Stratford's inaugural performance of Richard III on July 13, 1953,[3] Tony Award-nominee Scott Wentworth has performed within the festival's stage productions on numerous occasions since 1985, beginning with The Glass Menagerie,[4] the festival has helped Sara Topham found herself with a career in acting, performing from 2000 to 2011,[5] and a young, unknown Christopher Walken appeared in Stratford's 1968 stage productions of Romeo and Juliet and A Midsummer's Night Dream, portraying Romeo and Lysander respectively.[6]

On 17 February 2015, AP News reported that the Stratford Shakespeare Festival plans to film all of Shakespeare's plays.[7] 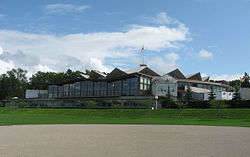 A view of the Festival Theatre as seen from the Avon River.

The Festival was founded as the Stratford Shakespearean Festival of Canada, due mainly to Tom Patterson, a Stratford-native journalist who wanted to revitalize his town's economy by creating a theatre festival dedicated to the works of William Shakespeare, as the town shares the name of Shakespeare's birthplace. Stratford was a railway junction and major locomotive shop, and was facing a disastrous loss of employment with the imminent elimination of steam power. Patterson achieved his goal after gaining encouragement from Mayor David Simpson and the local council,[8] and the Stratford Shakespearean Festival became a legal entity on October 31, 1952. British actor and director Tyrone Guthrie agreed to become the festival's first Artistic Director. On July 13, 1953, actor Alec Guinness spoke the first lines of the first play produced by the festival, a production of Richard III: "Now is the winter of our discontent / Made glorious summer by this son of York."[9][10]

This first performance took place in a giant canvas tent on the banks of the River Avon. The season lasted six weeks and comprised just two plays: Richard III and All's Well That Ends Well. In the second year the playbill expanded, and included the first non-Shakespeare play, Oedipus Rex. The Festival Theatre was opened in 1957, and was deliberately designed to resemble a tent, in memory of those first performances. The Festival Theatre's thrust stage was designed by British designer Tanya Moiseiwitsch to resemble both a classic Greek amphitheatre and Shakespeare's Globe Theatre, and has become a model for other stages in North America and Great Britain.[11][12]

The Festival runs from April to October, and has four permanent venues: the Festival Theatre, the Avon Theatre, the Tom Patterson Theatre, and the Studio Theatre. Although the Festival's primary mandate is to produce the works of Shakespeare, its season playbills usually include a variety of classical and contemporary works and at least one musical.

The Stratford Festival Forum runs during the season, and features music concerts, readings from major authors, lectures, and discussions with actors or management.

The Stratford Shakespeare Festival is an industry partner of the University of Waterloo Stratford Campus.[15]