The first station on the site was opened as Stratford Bridge on 14 June 1847 on the Eastern Counties and Thames Junction Railway[2] between Stratford and Canning Town stations. By the 1860s the railways in East Anglia were in financial trouble, and most were leased to the ECR; they wished to amalgamate formally, but could not obtain government agreement for this until 1862, when the Great Eastern Railway was formed by amalgamation. Thus Stratford Bridge became a GER station in 1862.[6]

The station served a local fruit and vegetable market and was renamed Stratford Market on 1 November 1880.[2]

The station was resited in 1892 when the line was widened.[2] On the westbound platform there was a tower that contained steps that allowed direct access ver the goods lines to the adjacent Great Eastern Railway's printing works which opened in 1893.[7] This building is still extant today (2015).

Following the 1923 grouping the station was operated by the London & North Eastern Railway.

Following nationaliation of the railways in 1948 the station was part of British Railways Eastern Region.

The East Coast floods of 31 January 1953 saw tracks in the station flooded.[8] The station closed on 6 May 1957[2] due to lack of traffic and the proximity of the larger Stratford station, which was also served by other lines.

The line through the station site to North Woolwich closed in 2006 for works to start on conversion to DLR operation.

The two trains collided on the junction directly north of the station with the goods engine overturning and crushing its fireman William Secker.[9][10]

The red brick station buildings from the original station still stand on the south side of Stratford High Street.

The station is located on Stratford High Street. It is provided with footbridge connections to Bridge Road and Burford Road in order to provide access to the surrounding areas. In order to locate the station here part of Bridge Road has been permanently closed to vehicles except for emergency access, and access into Burford Road from the A118 blocked. This avoided the need to take land from Rokeby School whilst also enabling the station to be located close to Stratford High Street.[11] 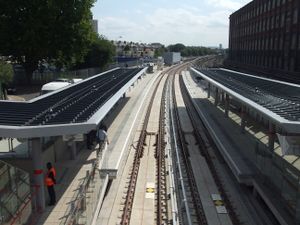 A large goods depot was located south of the station on the western side of the line. This opened in 1879 for "potatoes, roots, hay and straw" and served the market. Additionally there was a coal depot and a siding which served the Patent Victoria Stone Works. In 1907 the market depot became the centre for the distribution of bananas in London with Fyfes and Elders both having depots on the site. Around this time the depot had capacity for 400 wagons (a standard wagon being 21 feet long). The depot closed in the 1960s although the sidings were used for storage of withdrawn rolling stock for a number of years afterwards.[13]

The opening of the Jubilee line extension in 1990s saw the site used as a depot for the rolling stock that works the line (the rest of the lines rolling stock is maintained at Neasden). The depot itself opened in 1996 designed by Chris Wilkinson Architects and is 100m wide and a 190m long arched roof covers 11 maintenance roads.[14] 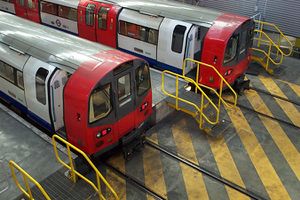